Tonight is packed full of release shows, and I've got a few others in the mix I need to talk about. --- First on the list is the latest from Replica Mine, a one-man industrial-rock project from local musician Adam Harmon. Last year, he released the first of a two-part album concept with an EP called A Ghost In The Womb, Part 1: Acceptance. Now, he's returned in 2013 with the second half, called A Ghost In The Womb, Part 2: Devastation. You can download both EPs for free off his website and combine them to make a full-length album, if you want.

Next up on the list is the latest release from the band Summerteeth. Their last full-length album, The Future's Over, came out this past July, along with what many would call a major shakeup. The last time the band had a release, they were recording as a group behind the scenes, but since then it seems founder Andy Westenhaver has moved on as a solo writer and musician of his own project, recording this latest four-track EP titled Room Of Many Colours by himself. Granted, Westenhaver was essentially calling the shots before this anyway, but it's a bold step for any musician to take on all the instrumentation himself. You can download the EP for free off the project's Bandcamp page.

Getting into release shows, we've got three tonight, starting with the first-ever release from Night Sweats. I won't be going into much detail because Katherine Nelson already did it for me in this week's issue of City Weekly, so I'll just point you to the show, where you can pick up this debut EP, Red. They'll be playing at The Urban Lounge with Hang Time (who are finally doing an official show for their album that came out a few weeks ago) and DJ Geronimo. Just $5, starting at 10, and $10 gets you both albums. 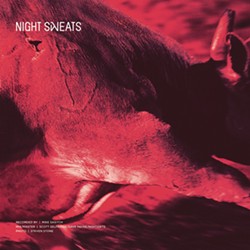 Meanwhile, down at The Woodshed we'll see the latest from Funk & Gonzo. These guys have gone through many transitions over the years, always evolving their style and presentation. The group (seen above, courtesy of their Facebook) are coming up on the eight-year marker with an everloving fanbase for their funk-influenced rock with hints of hip-hop and reggae. The band released their self-titled EP back in 2009, followed up in late 2010 by their debut full-length album, appropriately titled The Next Step. Aside from monthly showcases at The Woodshed, the group haven't been playing around the state much since then, but that's probably going to change with the sophomore album, Spread Like Fire, dropping tonight. You can pick up a copy as the group plays The Woodshed along with Babble Rabbit and Slow Ride. $5 starting, at 10.

If neither of those do it for you, Color Animal will be releasing their debut album tonight, as well, at The Garage. I won't need to say much on this, either, as CW's Austen Diamond covered it in his Liner Notes post this week. You can snag a copy of Vision Lies as they play with Bronco and Albino Father. Just $5, starting at 9.

Then tomorrow night, we'll see another release in Logan with the debut from Paul Christiansen. An Idaho native now residing just south of his hometown of Montpelier, Idaho, Christiansen has become a fixture of the Logan music scene. He released his first album, A Record Of, back in mid-2011, and we haven't seen much of him since that time. So, with any luck, this sophomore album All Things, Eventually will change that, as he'll be releasing it on Saturday. You can catch him tomorrow night at Why Sound in Logan with Hoodoo. $5 starting, at 7.

Finally, it's an out-of-left-field release from the Layton-based band Your Surrender, an alt-indie group made up of seven musicians. The band pride themselves on a battle-of-the-bands win in their hometown and the fact that they can cover artists like Adele, Taylor Swift and Coldplay, among others, according to their Facebook. But I wouldn't be promoting their wok if they were just a cover band. The group now have passed on cover tunes and decided to compose their own full-length album titled The Day The Sky Split In Two. They utilize their vocals to the fullest extent, as their combined efforts get near choir-like, and while the alternative is there, it feels more like a folk album. It's worth a listen if you're into a lighter acoustic sound. You can buy the album for $8 on Tuesday off their Bandcamp site.