Provocative comedy is in short supply, a stereotype that does come with our location, but that doesn't stop a brave few from trying to push the boundaries onstage. --- Guy Seidel has been one of those few, adopting a “don't give a fuck” attitude toward offended audiences and aiming to purely entertain through his inciting point of view, as well as a bit of his musical talent for the occasional show with Marcus. Today, I chat with Seidel about his career and comedic style, plus a few other topics. (Pictures courtesy of Seidel.) 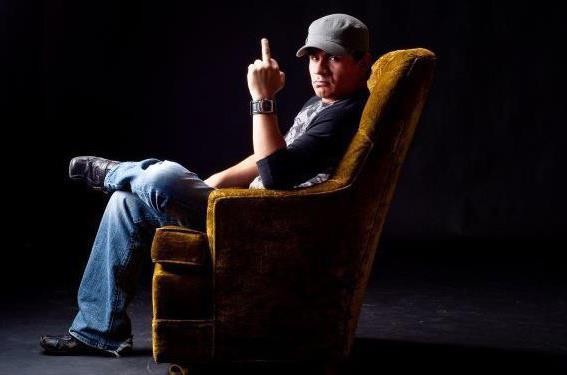 Gavin: Hey, Guy. First off, tell us a little bit about yourself.

Guy: What got me interested in it was I've always been an entertainer. I played lead guitar in a heavy-metal band since I was 16, and when everyone started growing up and having kids, the gigs came less and less, so one night I went on a date and we went to a comedy show and I probably looked like a douche because I kept saying, "I'm funnier than these guys." So, I had to put up or shut up. Some of my favorites were George Carlin as a kid, then Mitch Hedberg came along and proved you don't have to be smart or insightful to be funny, sometimes stupid is funny.

Guy: I never thought I would actually become a comedian, I did an open mic just to say I did it and make my friends laugh; I never thought I’d do more than that. After I did my first open mic, a national comic happened to be there, and the club owner took me aside and asked me how long I had been doing comedy and that I was talented so I kept going back.

Guy: I primarily work Wiseguys, and when I first started there were a few rooms around town that did comedy, as well, like Club Vegas and The Huka Lounge, so when I first started I pretty much got onstage anywhere I could. As time went by, I got a little more selective, started emailing bookers for road gigs and networking with local headliners. You have to hustle and not be too proud to ask. I would ask headliners if they needed an opener on the road, then the booker or club would hear good things then I would go back later and headline that gig. Locally, I pretty much stick to Wiseguys; I've headlined the club for years but still doing opening and hosting sets, often.

Guy: Finding your voice. When I started out, I had long hair and was really high-energy. When I started, I was a very clean comic, which I think is a good idea; writing clean makes you a stronger writer and more diverse. As time has gone by, I have become a lot more aggressive and vulgar, but I still don't think I'm "dirty" because I don't make many sexual jokes and never write poop jokes.

Guy: When I first started, I would sit down with a pad and paper and force jokes out, but I've found that painful. Anymore, I will just go onstage and do my tried material but also sprinkle in some ideas I've had. I pride myself on being sharp onstage; it doesn't always work, but sometimes I like going up unprepared.

Guy: I don't really see it as competition. Most comics in SLC are really cool and supportive of each other; there are some guys who see it as an alt-scene vs. Wiseguys. I don't really perform in the alt-rooms much, but it's not for competitive reasons.

Gavin: For the past few years, you've worked with Wiseguys to present a holiday fundraiser show. How did that get started, and what kind of work have you been able to do with it?

Guy: About four years ago, I went in to KBER 101 to plug a show on Mick & Allen's Freakshow, and when I got there, they were talkin' about a family that was in a really bad situation so I decided to donate the money I made that night to the family. The next year, I decided to gather items to raffle off at a show, then take the money to Mick & Allen and then they give that money to local families that call in and need help. This last Christmas, we raised almost four thousand dollars and helped dozens of families. It's been cool to see it grow every year.

Gavin: Are there any plans down the road for you to tour, or are you sticking to home for now?

Guy: I do go on the road but not full time. I have several friends who are "road-dogs" and they love it, but I couldn't live that lifestyle full time; it's drive drive drive, shitty motel, drive some more, but it is fun to do here and there. I love having the luxury of staying home and then picking and choosing the road gigs I can take.

Guy: The local scene is great; people don't realize how good we have it. There are plenty of opportunities to get onstage and supportive comics to help. The bad is that a lot of people get a bad taste in their mouth when they aren't opening for Dave Attell after their first open mic, so they run across town to the alt-scene and bad-mouth Wiseguys. Some of the alt-rooms will let ya do 10 minutes on an open mic, where Wiseguys gives ya three. I see it as if you aren't strong in three minutes, you can't be strong for 10. That's not to say that no one over there is funny; some of them are really strong comics.

Guy: I'm sure there is but I don't know exactly what it would be. Wiseguys is pulling in A-list comics, Dave Attell, Bill Burr, etc., and the alt scene has had Doug Stanhope and a few other heavy hitters come in, as well. The Egyptian Theatre in Park City has comics, too. The local scene is one of the best as far as non-major markets go.

Guy: Haha, this is where I get in trouble for not mentioning friends. Greg Orme is a dude who has a super-weird style that I find hilarious; Christian Pieper is a great writer, which doesn't always translate to the stage but his writing does. There's a few other guys who are on fire right now

Guy: Any clubs that give comics a chance to perform are taking a risk; a shitty comic will be a representation of your club. The bar scene doesn't have as much to lose -- they usually have one night a week where they have comedy, and if it fails, who cares, make it karaoke night. Wiseguys is 100% comedy, so the qualifications to get onstage during a regular show are a little tighter; they can't risk having a comic who isn't ready represent the club.

Guy: The national comics coming through town are priceless to me. Those guys are where they are for a reason, and it's great to get a chance to talk with them, learn the business and network. I have met most of the comics I've always looked up to and even become friends with some.

Guy: I hope to finally get a CD out this year; I've recorded several but I always second guess them and say, "I'll record the next show and use that." I would also like to spend more time in L.A. this year. I landed a gig at The Hollywood Improv last April and got a taste for L.A. so I will be heading back.

Guy: I just headlined The Wiseguys in West Valley so I will be laying low for a few months, aside from opening or hosting spots. But things always come up. I am a big Facebooker, I put jokes up everyday as they come to me and it's kind of become what my friends know me for. So, add me if you're reading this!