At one point during an extended solo (solo doesn’t exactly do it justice, though … how about epic-low-end-can-do-no-wrong-jaw-dropper?) delivered from Victor Wooten during the beginning of his first set Monday night, I asked myself, “Can I handle this much awesome tonight?”---

It wasn’t necessarily the “solo” or the fact that there were also two other bass players simultaneously droppin’ both rhythm and melody; rather, it was the overall feel: a band of the highest caliber musicians -- seven in total -- led by possibly the greatest living bassist and definitely a national musical treasure, Victor Wooten, on one stage, all the while grinning widely and making music magic happen.

I walked in as Wooten’s band was a song or two deep into the set, and they were jamming out “My Life.” Two things were quickly apparent at this sold-out show: 1. The band members were having side conversations and making jokes with each other (and with the audience), and 2. I needed ear plugs, for this evening’s bass-licking was a mighty thing indeed.

After the five-time Grammy-award-winning musician—best known for holding down the low end with Béla Fleck & the Flecktones -- sang the verse, “Gonna make me a record and fill it all up with bass/ I can add a little keyboard if I want to but I don't,” he then proceeded to thump, whack, pluck, smash, riff and cavort his bass in ways that I have only seen about six other times -- and every other time, it was also Wooten. The man has the uncanny ability to turn any erred note into something graceful or supremely awesome.

About three minutes into the solo, I realized that my mouth was open, my tongue was out (I’m not exaggerating or being cliche, either) and I might not have been breathing. Was I alone? I looked around and the folks who didn’t have their head down and dancing had the same facial expression.

Wooten isn’t all about showboating, though. Peppered throughout the evening were tunes from Wooten’s recent two releases. Words & Tones features a bevy of female vocalists crooning over Wooten’s original compositions, while Sword & Stone offers up many of the same tracks but in instrumental versions, showcasing new interpretations and guest musicians. This night was filled with exaggerated and awe-inspiring solos, but, moreso, there was an emphasis on composition.

After “My Life,” he took a minute to introduce his all-star band; see, Wooten isn’t the only virtuoso in the group -- they all are. The merrymaking J.D. Blair was holding down one half of the percussion, then there were multi-instrumentalists Anthony Wellington and Dave Welsch, sassy vocalist Krystal Peterson and the head chair of the bass department at Berklee College of Music, Steve Bailey.

As Bailey took center stage for the next song, he played a six-string fretless bass. Several times during the tune, Wooten exclaimed, “That’s impossible!” Peterson saddled up to the mic to sing “Imagine This” with a teaser of “Let’s Hear it for the Boy” to send the crowd spinning before set break.

The band came out with the appearance of having gotten into a fight or something backstage -- or maybe it was past their bedtime -- and it took a song to warm back up. After the set opener, Pederson wowed the crowd with a reworking of Stevie Wonder’s “Overjoyed.” 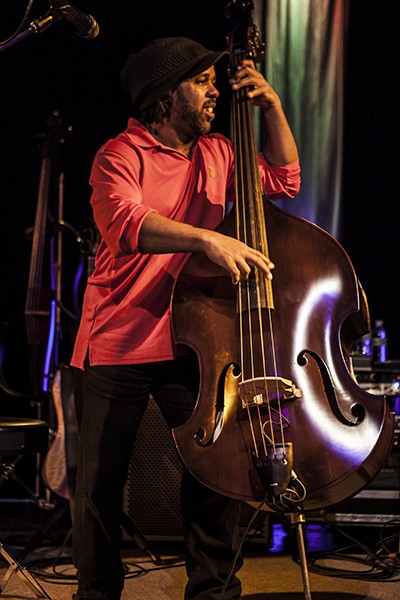 Another second-set highlight was seeing Wooten play upright bass (above) and cello -- the guy cannot be stopped!


After a riveting drum solo, Wooten drew a name out of a box for a raffle. Brian Hodson (pictured below) won Wooten’s used bass strings, an autographed photo of the band and, for the benefit of everyone in the audience, a song of his own choosing. After thoroughly melting faces with reckless abandon during a duet with drummer Blair, Wooten said that he hadn’t played “Me and My Bass Guitar” in a “really, really long time.” The set was rounded out with Wooten taking the stage solo for “Amazing Grace,” followed by a full-band jam on “Sword and Stone.” The Victor Wooten Band came out to catcalls and shouting that stood in juxtaposition to the mostly hushed-throughout-the-night attendees to encore with … actually, I don’t remember, because I was so dizzy from the musicianship already performed and was dancing. That’s either a testament to the show or to my failing memory.

Best overheard quote: “Every time I see Vic Wooten, I think to myself, ‘That guy needs to go home and practice.’”

Number of basses on stage: 12 (plus an electric cello)

Number of “sweaty” bass strings given to one fan, drawn at random: 4

Unusable excerpt from reporter’s notebook: “This is the best show I have ever seen … Wait, I say that at least once every two weeks ... is that a good or bad statement to use frequently?