Don't think for a moment that Salt Lake City, Ogden and Park City are the only places with thriving breweries and pubs. Beyond the confines of those counties, business is booming for smaller independent companies. --- One of the best examples of that would be Moab Brewing, who have proven that location means nothing when you have a fine set of brews at your disposal. For nearly 17 years, the brewery has been a cornerstone in the city's character and nightlife and helped prove to travelers and beer aficionados that Moab has more to offer than just outdoor life.

Today, I chat with one of the co-founders of the brewery, John Borkoski, about his career in brewing prior to Utah, forming the brewery and establishing its line, becoming a player in the local brewery scene, thoughts on local laws and changes and a few other topics.

Gavin: Hey, John. First thing, tell us a little bit about yourself.

John: I’ve been an entrepreneur all my life. In 1986, I purchased a restaurant at the Park City Resort. I wanted a more rural town life so I moved to McCall, Idaho, and got into the beer business by founding the McCall Brewing Company. I really enjoy operating businesses in small towns and love the restaurant and beer business.

Gavin: When did you first take an interest in brewing and what were some early influences on you?

John: I first took an interest in brewing when I began to see microbrews in bottles and kegs in the early ‘80s. I started selling them through my restaurant in Park City and was intrigued by the different tastes microbreweries had to offer.

Gavin: What kind of home brewing had you done prior to making a career out of it, and how was it for you learning the ropes in making a quality beer?

John: I began homebrewing with a climber I met in Park City by the name of Adrien Burgess. He taught me how to homebrew, and by the time I opened McCall Brewing, he was brewing beer at a base camp on Everest. He would brew the beer there so it would be ready when he got back down the mountain. He’s a great guy; he would take signs from the McCall Brewing Company and take pictures of them across his base camp on Mount Everest.

Gavin: What made you decide to turn this into a career, and what was it like early on getting into brewing?

John: I decided to turn my love for restaurants and craft beer into a career when my friend Dave suggested we open a microbrewery in Moab. I had enjoyed the brewery in Idaho. I was very excited with the opportunity of opening a 325-seat restaurant and larger brewery in Moab.

Gavin: As already mentioned, prior to coming to Utah, you founded McCall Brewery Company in Idaho. What was that venture like, and how well did it do when you first opened?

Gavin: When did you first meet Dave Sabey, and how did the two of you become friends?

John: I met Dave when I owned the Corner Store in Park City. He would come in after a day of skiing and we’d have a few laughs and a few beers. It’s easy to start a good friendship over good beer.

Gavin: How did the idea come about to start up a brewery together, and what made you choose Moab for the location?

John: The idea to start a brewery with Dave came about because he was approached about a defunct restaurant in Moab. Dave called me and asked if I thought a microbrewery would work in Moab, and the rest is history. It’s been a great collaboration, and we are both proud that the Moab Brewery has been around since 1996!

Gavin: What was it like for you getting the equipment and supplies together to start up and working with the city to establish a microbrewery there?

John: Working with the city of Moab was great -- a very positive experience. The community was supportive, and although we started off on the rural end of town, we’re now in the midst of Moab’s southern expansion.

Gavin: What were some of the first brews you came up with that stuck around, and what kind of challenge was it for you putting those together?

John: When I opened the Moab Brewery, I already had 18 recipes from the McCall Brewing Company. However, we had to learn how to adapt those recipes, to keep the flavor and body while maintaining a 4% ABV. What has been so interesting to me is that after all these years, our signature beers are still our signature beers. Dead Horse, Derailleur Red Ale, and the Scorpion Pale Ale are all beers we’ve fine-tuned and they’ve stuck around.

Gavin: Without giving away major details, how do you go about making a new brew, from start to finish.

John: Here I have to give credit to the brewers who have worked with me. They introduce new beers and help develop the recipes we have. They are constant innovators, and the real magic workers in the brew house.

Gavin: The most popular beer you have right now is the Dead Horse Ale. What do you attribute its popularity to, and what are your thoughts on it lasting as long as it has?

John: Dead Horse has been our signature beer because it’s a simple amber ale. Everyone will enjoy it either with food or just on its own. The drinkability of Dead Horse is amazing, and that’s what people love about it.

Gavin: What are some newer brews you've just come out with or are currently working on?

John: Jeff Van Horn is the brewmaster at the Moab Brewery. He’s been with me since 2002 and has taken over all the brewing responsibilities. A few of the beers he has helped develop are our Porcupine Pilsner, Rocket Bike Lager, Johnny’s American IPA, and our new Squeaky Bike Nut Brown Ale, just to name a few. All of these beers are doing great due to Jeff’s experience in the brewing industry. Jeff has also perfected the art of bottle conditioning. We offer a line of bottle-conditioned, high-gravity beers we call our Desert Select Series. These beers give us a chance to really show off our full array of brewing talents. Most recently, we added a Hopped Rye and Export Stout to the series.

Gavin: What are your thoughts on having the city of Moab embrace the company and take pride in having its own microbrewery in the city?

John: The Moab Brewery is now one of the largest employer’s in the town. Many Moabites support our company by dining at the restaurant and enjoying our beers so much so that we stay open year-round to provide the community with a local watering hole. Most restaurant businesses in Moab shut down for periods over the winter.

Gavin: Do you have any plans to expand the company down the road, or maybe open a new brewpub?

John: We recently underwent a 5,000-square-foot expansion. The new space allowed us to bring in new tanks, to add our canning line and expand our distribution. We now can three beers: the Dead Horse, Johnny’s American IPA, as a session beer, and a 7% ABV IPA, and Rocket Bike Lager -- again, as a session beer -- and a 5.5% ABV beer. So, really, we have five beers we run through the canning line. It’s a pretty busy brew house. We’re always interested in a new brew pub -- I told you I was an entrepreneur!

Gavin: Going statewide, what's your take on the current liquor laws, both good and bad?

John: I have a pretty good take on the liquor laws in Utah. I’ve been involved with liquor in Utah since 1985, and in 28 years the state has done nothing but progress in a positive way.

Gavin: Is there anything you believe could be done to make things more progressive?

John: I’m not quite sure at this time how the state goes about reviewing positive changes regarding liquor laws. I feel that the brewing and restaurant community are a wealth of knowledge. It would helpful if individuals like myself could give our input regarding the laws and the input would be taken in a positive light to help the state move forward.

John: We have a very constructive and supportive relationship with breweries across the state. The craft-beer industry is a very cool industry to be a part of because of the cooperation and collaboration that takes place.

Gavin: With all the progress that's been made over the past decade and the boom in pubs, where do you see the Utah brewing community going over the next few years?

John: The Utah brewing community is growing in a positive light. That being said, though, there is only so much space on the shelves and so many tap handles to be filled.

Gavin: What can we expect from you and the brewery the rest of the year?

John: You can expect incredible things from the Moab Brewery in the coming yea:. new cans, a further reach of our distribution and new beers. We recently expanded into Nevada, Idaho, Maryland, D.C., Delaware, Mississippi, and will soon be in Arizona and Colorado. It’s an exciting time for our brewery and we appreciate all the support. 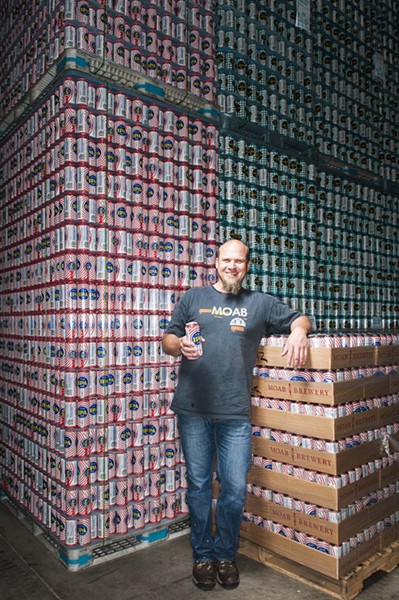 John: We really want to promote our support in Utah. Hats off to everyone who raises a pint of our beer. We are looking forward to a great future. Footnote: The Moab Brewery’s products have won numerous medals and awards over the years!