Over the past year, the Salt Lake Film Society has been making minor changes and adjustments to bring a better experience to the community and interactive encouragement to keep people coming back. --- Things like changing out all the seats to the new comfy blue chairs, alleviating the waiting process during the Sundance ticket lines, improving the concessions area and about a dozen other things that set them apart from the major chains have been undertaken.. One of the more impressive additions has been one of the simplest to implement – a podcast. 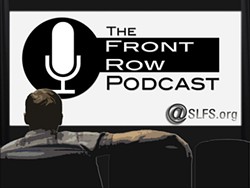 The Front Row Podcast is hosted by Andik Wijaya and Dylan Allred, who sit back and talk about films on their way to the Tower and Broadway, while also discussing their favorite films, awards, festivals and anything else they feel like in the world of cinema. Today, I chat with the two hosts about the show and the work they're doing with the Salt Lake Film Society.

Gavin: Hey, gentlemen. First thing, tell us a little bit about yourselves.

Dylan: My name is Dylan Allred. I am from Ogden and I am a total film and TV geek! I'm a senior at Weber State and plan on moving to L.A. after I graduate to begin a career in "the industry."

Andik: My name is Andik Wijaya, I grew up in Jakarta, Indonesia, where both of my parents are film enthusiasts. When I was very young, my dad always took me to watch every single Hollywood film or Hong Kong film open in the city, while my mom took me to watch Bollywood films. While I was attending the U of U for Human Genetic program, I got a chance to take a lot of film-history classes that completed my study on world cinema in general and learn about many great directors along the way.

Gavin: Andy, how did you first get involved with the Salt Lake Film Society, and what was it like for you first starting out with the organization?

Andik: I used to work for Greg Tanner, who ran The Tower Theatre before he sold it to Paul Liacopoulos. I recall the early days of SLFS with Brooke Harper and Paul were the hardest because we just never knew how long we would stay open. It was quite a struggle. But, things started to get easier when we added The Broadway as one of our venue and became SLFS nonprofit organization in the process.

Gavin: What was it like for you becoming the manager of the Broadway, as well as the manager for operations and customer experience, and what does your daily job entail?

Andik: As a film fanatic, there is no better job than running an art-house theater, where I met people and made a lot of friends who had a similar interest. I feel very blessed because I could mix work and pleasure, and because of that I always looked forward to coming to work.

Gavin: When did you first meet Dylan, and how did the two of you become friends?

Andik: I met Dylan for the first time when The Let's Go Eat Show interviewed Tori Baker and me about The Salt Lake Film Society last fall.

Gavin: Dylan, the last time we spoke was for The Let's Go Eat Show. How have things been going with the show?

Dylan: Things are going really well with The Let's Go Eat Show, and I am in the beginning stages of another very exciting podcast coming later this spring.

Gavin: What was it like for you getting involved with SLFS and its program?

Andik: Being one of the programmers for the Salt Lake Film Society is one of the best parts of the job. It allows me to see films several months in advance before they open to general public, and it also makes me feel I'd accomplished something great when I could share small masterpieces, such as Bahman Ghobadi's No One Knows About Persian Cats, that otherwise would never see the light of day in Salt Lake City.

Dylan: I am really excited to be a part of the SLFS! Not only am I a big fan of independent films and all of the other amazing programs the SLFS has, I really enjoy hanging around the Broadway or Tower and chatting with other film geeks.

Gavin: How did the idea come about to start up a podcast for SLFS, and why The Front Row for the title?

Dylan: I met Tori and Andy when they came on The Let's Go Eat Show; we had such a great time talking about movies, we all said, "Hey! This would make a great podcast." Do you remember when you were a kid and would be so excited to go see a movie that you wanted to sit right on the front row? That's who this podcast is for -- those of us who are still so excited about going to the movies that we want to sit on the front row.

Gavin: What was it like getting the equipment together and recording the first episode?

Dylan: Pretty easy because I already had the equipment from other podcasts and stuff.

Gavin: Early on, the schedule was infrequent with random topics. What was it like for you back then planning the show, and how did you eventually find your rhythm?

Dylan: Early on, we spent a lot of time talking about SLFS events and programs, but recently the show has started to become more like sitting around with your buddies talking about movies, except one of my buddies is Andy, who is a walking, talking IMDB. The show is still changing and evolving. We have only done about 12 episodes so far.

Gavin: What's the reaction been like from listeners, and how has it been for you building an audience?

Dylan: People have been liking it ... I hope. The number of downloads has been consistently getting larger. We like to hear from listeners; we even set up an e-mail address so they can communicate with us about whatever they want: thefrontrowpodcast@gmail.com.

Gavin: What's the process for both of you in deciding topics and planning episodes?

Andik: We always talk about the upcoming film at The Broadway or Tower, and we also do Video Pick Of The Week from our collection at The Tower. We are in the process to add more topics and conversations or interviews from different individuals.

Dylan: The topics are mainly what is opening each week, and then whatever else we talk about just comes up in conversation.

Gavin: How has it been for the two of you working together as co-hosts and finding the show's voice along the way?

Dylan: Every time I talk to Andy, he blows my mind. His knowledge of film of all kinds is amazing!

Andik: I am always VERY EXCITED to do the recording. Because as a film enthusiast, it always nice to share your view on a certain film and learning different points of view from others. 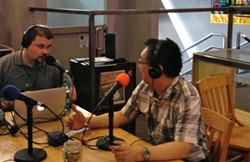 Gavin: How has the film community responded to the show, and do you plan on working with local filmmakers and competitions down the road?

Dylan: I am excited for some of the SLFS summer events and to talk about them on the podcast. Talking to filmmakers about what they do is something that we are in a unique position to do, and we like to grab those opportunities whenever they present themselves.

Gavin: What's your goal with the show, and what kind of an impact are you hoping to have with it?

Dylan: My goal is to simply provide people with insight into different types of films and, hopefully, help people continue the conversation about film outside of the theater.

Gavin: What can we expect from both of you and the show over the rest of the year?

Dylan: The show will continue to grow, and we are going to bring in both more people who love film and people who make films.

Dylan: Well ... you can find The Front Row Podcast on iTunes, Stitcher Radio, and SaltLakeFilmSociety.org.