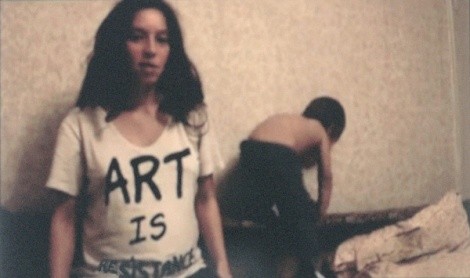 On Monday, April 15, Benning will introduce screenings of 2012's the war and 2007's Casting a Glance at two separate events. The former -- a compilation of videos shot by the Russian activist group Voina chronicling their activities (pictured) -- will be screened at 2:15 p.m. at the Utah Museum of Fine Arts; the latter -- a meditation on changes over the years at Robert Smithson's famed Spiral Jetty in the Great Salt Lake -- will be screened at the University of Utah Fine Arts Auditorium at 7 p.m.

Both screenings will include comments and Q&A by Benning, and are free and open to the public on a space-available basis. The screenings are presented by the Utah Museum of Fine Arts, the University of Utah Department of Film and Media Studies, the Dia Art Foundation and the Great Salt Lake Institute at Westminster College.

UPDATED 4/10: According to a representative for James Benning, the press release from the Utah Museum of Fine Arts was in error. Screenings of the war are not taking place due to an agreement with Voina; an alternate Benning film still to be determined will take its place for the 2:15 p.m. screening.

UPDATED 4/12: The replacement screening has been identified as two cabins.