Love this SLC Bigfoot band for their skills, not their girth | Buzz Blog

Love this SLC Bigfoot band for their skills, not their girth 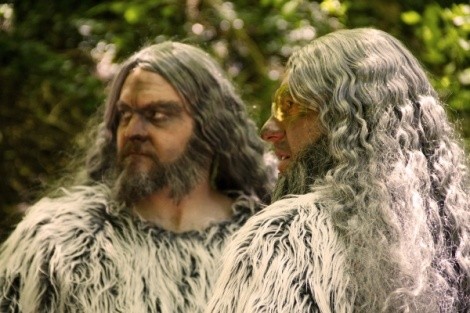 As far as I know, there are three, surefire, 100 percent constants in life -- death, taxes, and if you attach the word “Bigfoot” to something ordinary, people will inexplicably love the crap out of it.--- Don’t believe me? Think back to 1993: How jacked were you to try one of these bad boys?:


Ironically, experts claim this pizza tasted exactly like a big hairy foot. Just for the hell of it, you need to watch the El Salvador version.

Like its distant cousin "X-Treme," the Bigfoot constant doesn't apply to just  2.5 feet of pizza. No, it works for anything. Back in the day, monster trucks were mediocre at best until Bigfoot jumped over a goddamned plane. Remember when everyone thought hiking sucked until the Jack Link's Jerky Sasquatch taught us to respect nature? Or how about when Harry and The Hendersons inspired an entire generation to drag their parents to a 90-minute film about a guy in a monkey suit?:

The point is, there’s no denying it -- if Bigfoot is involved people will love it. So it should come as no surprise that someone, somewhere, would eventually spawn the idea of a Bigfoot cover band. Meet Salt Lake City’s Wasasquatch (pronounced, “wah sas-quatch”), an eight-piece yeti-costumed band that performs everything from Led Zeppelin to the Spice Girls.

In an era filled with novelty-bands like Gwar, The Aquabats and even the Chuck E. Cheese robot band (RIP), it only makes sense that Bigfoot bands are now in season. When I heard Wasasquatch would be performing at the 2nd Annual SLC Nerd Festival, I seized the opportunity to meet up with bassist Craig Nybo and band mascot Kenny Hill at Liberty Park. 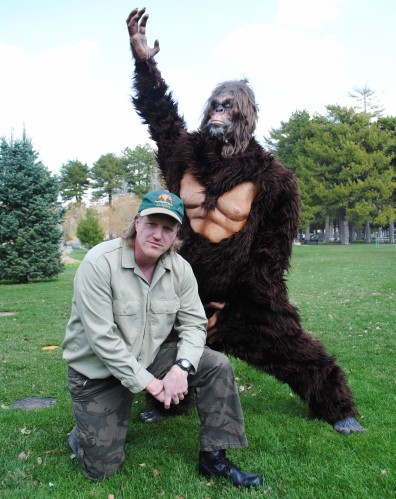 Craig (kneeling) chose to not wear his costume so that he could properly translate Kenny’s Bigfoot-speak. .


I should mention that I chose Liberty Park because I thought this would be a nice, quiet place to interview a Bigfoot band. However, little did I know it was spring break, which meant the park was completely packed with little kids. This, plus a 7-ft. Bigfoot costume meant there were also many confused and slightly terrified kids:


As much as this kid hated Wasasquatch, some of the other kids felt compelled to give them bananas.

We spent the afternoon talking about the band and doing normal stuff  that anyone would do on a beautiful day in one of Salt Lake City's premiere parks -- we arm-wrestled for that delicious banana:

We also went mano y mano in a push-up competition:

and, obviously, we figured out who's faster in a foot race:

After the banana-thon, I was surprised to learn that Wasasquatch has been around for a mere two years and has only played handful of gigs. “I’ve had lots of calls from people interested in booking the band,” said Nybo, “But we're very selective about where and when we'll play. It has to be the perfect show. That's why SLC Nerd is such a good match for us. Batman, Aquaman and Wonder Women, they’ll all be in the audience, we'll fit right in. 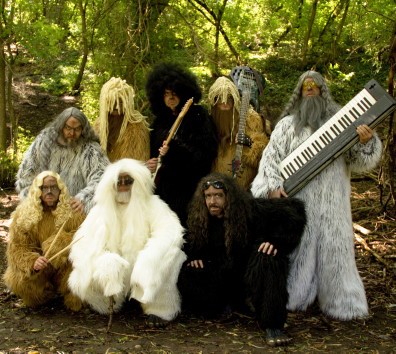 
Like any serious musicians worth their chops, the band came before the monkey suits. “We were in a band called Funk Toast back in the '90s,” said Nybo. “We had sort of a Brand New Heavies meets Jamiroquai feel. But the Bigfoot thing came about a couple of years back, when we thought it would be totally awesome for a band of Bigfoots to come out and play a set for the Gangrene Film Festival. It's not that weird -- people like Bigfoot, and Bigfoot with guitars are even cooler.

Like any decent costumed band, Wasasquatch has a pretty good background story. After all, Gwar came from space, Devo is from the future and Insane Clown Posse is from … I don’t know, HPV. According to their website, the band was discovered by a crypto-biologist behind the Utah State University dorms.

Inspired by the music blaring from the dorm windows, the Sasquatch decided to form a band for their woodland friends. Now after years of jamming in the woods, Wasasquatch is starting to play in front of human audiences.

“We regularly play in the natural amphitheater to the East of Ben Lomond peak for thousands of animals. Our music rings with bobwhites, raccoons, and antelope. It’s really only the moose who don’t like us; they tend to be too highbrow for our art. They spend their time wearing black turtlenecks and listening to jazz.”

The Complex will be hosting Wasasquatch on Saturday, April 20, for the 2nd annual SLC Nerd Festival. For tickets and more information on the festival, head to SLCNerd.com