April has been mainly about the online releases and not much happening show-wise until the last minute; kind of a shame, with Record Store Day happening on Saturday, too. So, most of what I'm discussing today is stuff released online or in secret. --- I'll start with the debut album for alternative pop band The Lovecapades, based out of Salt Lake City and comprised of Colin Rivera, Jon Campbell, Justin Curtis and Josh Gishi. The group has been performing together since around early 2011, earning a small amount of attention from their live shows, but didn't get to doing anything in the studio until late 2012. According to the band, they wrote about 30 songs and chose the best of the best to comprise their debut full-length release, Kaleidoscope. The album is well-produced and has some pretty good tracks, but it will be more interesting to see how these play to a live crowd. You can download the album for just $1 off their Bandcamp page.

Next on the list is Hurris & Gig. I actually interviewed these guys earlier in the week, so you should go read that to find out more about the duo. Go ahead, I'll wait ... Anyway, that very sold-out show at the Shred Shed was actually their album-release show for their sophomore album, As Good as It Was. You can buy the album off their Bandcamp page for a “name your price” tag.

While we're on the subject of hip-hop, Raw Xtract has a brand-new album out. The feisty woman producer/performer and poet (seen above, courtesy of Facebook) has been playing around with early jazz hits, R&B classics and a variety of urban genres with her remix albums as of late. Her most recent is a set of alternative remixes playing with music from The White Stripes, Nirvana, Rolling Stones, Led Zeppelin, Moby and others in this oddity album called Stop & Break. It's worth listening to, as there's a little something here for everyone, with awesome art from Dusk One. You can download it off her Bandcamp page for a “name your price” tag. 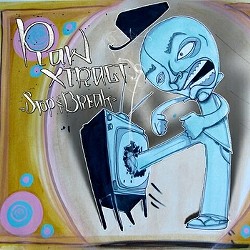 Moving to alternative and a little Americana, a coupleof  weeks ago, we saw the brand-new release from The Shuttles. Formerly of Logan, and now a SLC band, the band transformed over the years from a full group down to a one-man project from founding member Ben Hibshman. The latest release is an EP titled Shedding Layers Vol 1, which, according to Hibshman, is set to be the first part of a four-EP project to be released throughout 2013. You can download this first album for a “name your price” tag off Bandcamp, and be sure to check back for the remaining three pieces as they make their way onto the boulevard.

Keeping with the Americana theme, we have the debut album from Sam Winder. Winder has been doing the solo-performer thing in Provo for over a year now, and that's about it, really -- just a guy and his guitar gaining some exposure around the city, along with the awesome illustrations he does online. Winder hooked up with Chance Clift to put together his debut, The Oasis. You can download it on Bandcamp for a mere $5.

Staying in Provo but moving a tad indie, we have the debut album from Crazy Talk, a five-piece group who started up sometime in 2012. The group is comprised of both newcomers and experienced hands featuring Kevin Johnson, Felicia Zandonatti, Susanna Fullmer, Patrick Phinney and Stephen Bower. They haven't been doing this new project very long, but they've already cranked out a full-length debut titled Something Made of Wood. You can snag it for $5 off their Bandcamp page.

And finally, I'll end on something a little different from RJ Walker, the SLC-based stand-up comedian who has taken a very interesting route toward a performance album. His debut release, Anatomy of an Overdose, is partially funny, partially dramatic, but totally interesting when it comes to content. The album is essentially mini-essays set to music, with each track dealing with a different drug, ranging from marijuana to heroin, bath salts to cocaine. For this kind of album, it's pretty damned good, well worth listening to if you enjoy spoken word or even podcasts, not to mention awesome artwork from Chris Bodily for the cover. You can download it for a “name your price” tag on Bandcamp.