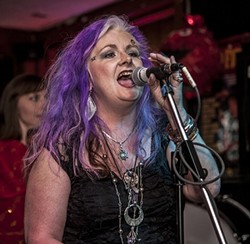 “This is either the CWMAs or a Portlandia episode,” City Weekly web editor Bill Frost Tweeted upon entering The Woodshed Saturday night. The most eclectic showcase of our two-week local-music series was certainly weird -- in all the right ways.---

When we book bands to play in our annual awards show -- this year there are 22 bands in seven showcases -- we strive to match genres to make for a cohesive concert. But, as is inevitable with this many bands, there are changes and add-ons, so we try to get as close to cohesive as possible. In the case of Saturday evening’s showcase with Bullets & Belles, Color Animal and Juana Ghani, this was definitely not the case, but the diversity and the dovetailing of talents made for an evening to remember, and left us wondering why we don’t mash-up genres more often.

The three-piece Bullets & Belles took the stage first, and once their two-girl-one-boy harmonies filled the bar, the chatter got a little quieter. With a minimal set-up of one guitar, a kickdrum, a tambourine and three voices, B&B played tunes from their debut EP, Curried Rice and the excellent January 2013 LP, Be Glad, which were stripped down to the emotional core of the vulnerable, heartfelt songwriting.

With cadenced, percussive “mmm”s, “doo”s and “bop”s, their namesake tune, “Bullets & Belles,” got the jaw-dropped crowd to shuffle their feet to the “neo-doo-wop-folk” sounds. One of the most beautiful songs of the evening, one that showcased singer Noel Sandberg’s crystal-clear voice (one of the best in the Salt Lake City music scene), was a cover of Honey Honey’s “Don’t Know How.” Other set highlights included a new song sung by Ryan Cron, Erin Haley’s moving “Monday Morning Prayer” (even though Haley stated she was nervous on stage, you couldn’t tell it by the performance), and “Countdown to Zero.”

In a musical landscape of genres with hyphens and slashes that's more about writers' egos (yes, I’m guilty) than music, long live rock & roll. The songs of Color Animal, a new band led by Andrew Shaw (The Platte), as heard on the four-piece’s new album, Vision Lies, are little earworms. But in concert, cranked up super-loud and full of crunchy tones and throbbing bass, they are earbleeders. And I loved it.

Even if the songs weren’t as good as they were, I would have been sold on them because the band was. All too often, there’s the aloof air of the performer that is less than engaging - -a “I’m going to stand here and make notes while you stand there and watch and drink your beer” aesthetic that does little to make people want to go see music. With Shaw sliding around onstage and hammering out notes with knees buckled and a cavorted look on his face, the band followed and blasted out a set of all-original tunes. Highlights included “Firecracker,” “Give Me Just a Little More Time” (the band’s “radio song”) and “Buffalo Point.” Long live SLC rock!

To end the night, Juana Ghani took over the stage -- literally, because there are so many of them; somehow, the “underground gypsy cabaret” personnel generally hovers in quantity at more than 10. Once settled, they evoked the macabre, but with a smile on their faces. Melodies coming from accordion, violin and classical guitar give this ensemble a unique sound that is at once cacophonous and mystifying. Also mystifying were the belly dancers the group brought in tow. Budmo!

Stay current on City Weekly Music Awards updates and vote for your favorite band over at CityWeekly.net/CWMA. And follow the action on Twitter by using #CWMA.