Ririe-Woodbury will be wrapping up its '12-'13 season tonight with the conclusion to its number-themed series. --- One will kick off tomorrow night at the Rose Wagner for a three-night engagement. If you'd like to read more about the production overall, check out Jacob Stringer's piece in this week's issue of City Weekly, where he talks with Charlotte Boye-Christensen (who is departing, with this being her final show) about her time at RW and the performance. As for me, I'm chatting with company dancer Alexandra Bradshaw about her career and thoughts on the show, which will also be the final performance from dancer Joseph "Jo" Blake. (All pictures courtesy of Ririe-Woodbury.)

Gavin: Hey, Alexandra. First thing, tell us a little bit about yourself.

Alexandra: This is my second year in Ririe-Woodbury Dance Company and I'm loving being back near the mountains. I grew up in Calgary, Alberta, which, much like SLC, is a city in a mountain valley. I feel very at home here. Let's see, what else? My favorite author is Salman Rushdie. I just married my best friend Jon, a classical guitarist. We have a beautiful border collie named Aida who keeps me on my toes.

Gavin: How did you first take an interest in dance, and what were some early influences?

Alexandra: As a young child, I was very ill and dance helped me feel strong, creative, and in control. My first stage debut at age 3 was "Itsy Bitsy Teeny Weeny Yellow Polka Dot Bikini." At age 4, my older brother James would "stage manage" my playroom dance concerts. He has since moved on to become a chemical physicist but I'm still stuck on dance.  In my early years, I wanted to be a ballerina -- shocking. It wasn't until I got to college and walked into a Donald McKayle rehearsal that I truly understood that I belonged in the contemporary realm. 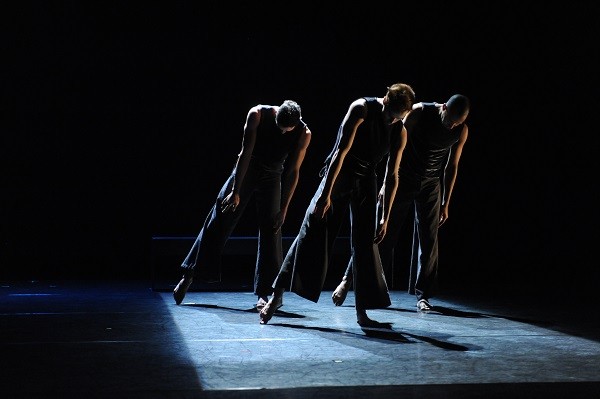 Gavin: What was it like for you growing up a dancer and learning the craft before college?

Alexandra: Sometimes, I envy those dancers who "found dance" in college. They have less old injuries and bad habits to sift through on their path. Alas! But for me, I am so grateful that I grew up inside the art form. It helped to hone a sense of discipline and drive in me that I feel has translated to all facets of my life.

Gavin: You have a BFA from the University of California Irvine in dance. What made you choose UCI and what was its program like for you?

Alexandra: I knew from the beginning that I wanted to double major in college. I had always possessed a passion for academics, particularly literature, and wanted to be certain that I could equally pursue those interests at the university level. Not all university dance programs are suited for that. UCI has an outstanding conservatory-model dance program that yet enables and actually encourages dancers to double major. The extraordinary faculty at UCI also makes it possible for students to excel equally in both ballet and modern technique, choreography, and performance. To be hireable in this dance world, it is crucial to be versatile!

Gavin: I read you also attended a couple of schools in NYC, and Cambridge in London. What made you decide to expand your education -- in another country, too -- rather than become a full-time professional as soon as you could?

Alexandra: I was lucky enough to have several opportunities to study abroad during my undergrad. I received research grants that helped enable me to leave UCI to go study dance at the Ailey School and Literature at Cambridge University in England. When I graduated at age 21, I started to pursue professional dance work. I am grateful for those invaluable learning opportunities in college that helped inform my career as a dancer. Possibly the most poignant lesson I learned was the importance for an artist or any human being to constantly inspire/challenge themselves by shifting their surroundings. I don't know if I would been brave enough to move to Israel a few years later if not for this initial taste of living abroad.

Gavin: Prior to coming to Utah, you performed with a number of groups, both international and in the States. How was it for you after all your education was done to just tour and perform?

Alexandra: HEAVEN! I am so grateful for dance, which has taken me to all corners of the globe. And possibly most memorable of all are the tiny middle-of-nowhere towns that I would have never, ever, ever experienced if not for touring opportunities.

Gavin: What eventually brought you to Ririe-Woodbury, and what was it like joining the company?

Alexandra: I loved the freedom and challenge of freelance dancing, but longed for stability and more performance opportunities. Ririe-Woodbury is a rare gem of a company -- a mecca where dancers work full time, tour internationally, and receive mentorship as teachers -- with health insurance, to boot! Furthermore, the dancers enjoy the unique privilege of working closely with one artistic director/choreographer while simultaneously dancing for numerous guest choreographers. It basically feels like full-time freelancing. And with that kind of focus and support, there is no limit to how far a dancer can grow. The year I joined, three of us came in together, which I think brought fresh voraciousness into the workspace. The six of us instantly became great colleagues and family.

Gavin: When did you learn about One, and what were your thoughts on the production?

Alexandra: We have essentially been working on this show since November, when German choreographer Johannes Weiland came in for two weeks to set a new piece on us to be premiered at One. You could even say that this show has been in the making since 2005, when Jo Blake first performed Charlotte's piece "Bridge." The dancers are excited to perform One: three unique works by three foreign choreographers. I believe the concert showcases the relevance and diversity of our company repertory, which Charlote Boye-Christensen has worked so hard to achieve during her 11-year tenure with RW.

Gavin: What is your personal favorite selection from One, and why?

Alexandra: "Bridge" is my favorite piece to perform. The exactness demanded inside of the choreography is tremendously fulfilling when achieved. It is an honor to perform this for Charlotte during her last concert with RW.

Alexandra: Stay calm so I can succeed and not just survive!

Alexandra: Well, you can find me here with Ririe-Woodbury. Our 50th-anniversary season has many exciting SLC shows and A LOT of touring in store. If you could be stationed on the sidelines with some oxygen and Gatorade, that would be super.

Alexandra: If you've never seen Jo Blake as a blonde diva rockstar, then you've never truly lived. Come join us and celebrate Charlotte and Jo, as they so deserve!