Hello to all you tissue-using, eye-watering, nose-itching, cotton-mouthing, where-the-hell-did-spring-come-from enthusiasts! --- Without fail, two days into the “warm up” and already I've seen people flocking through the pharmaceutical aisles for every variation of the tiny white pills that ward off all forms of allergy in the world. But, have no fear, it'll be gone in about a month, as we already have sacrificed half of our spring to the cold snap that would never fucking end. Before I dive into events, let's take a look at the latest addition to the 337 Memorial Wall, which in itself turns six years old this month!

First up on the event list will be tomorrow at the Main Library, as Craft Sabbath returns to take over its promenade with over 40 artists, ready to sell you that last-minute Mother's Day gift. And while you're there, say hi to the City Weekly crew holding down the table with some free goodies. 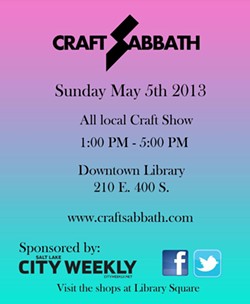 When you're done with that, head over to the Salt Haus to help them out with their all-day fundraiser for ... themselves! Let me explain a bit: Running a venue of ANY kind in SLC is a bitch. It truly is a combination of extensive paperwork, city codes, fire marshals and about a dozen other small additions and hassles that make it a pain in the ass for anyone to truly run an all-ages venue in here, let alone a bar or club. The Salt Haus has been helping bring more people out to the Granary District, but, of course, someone decided to inspect every minor detail about them, leaving them with about $1,000 worth of upgrades and repairs that need to take place. To help raise the funds, the crew are throwing an all-day for a $5 suggested donation. Performers will include Grimblee, DJ Robo Rob, DJ Battleship, Babble Rabbit, Ruddy Carpel, Heath Cliff, Dine Krew and more to be announced. Head over and show the Haus some love and keep this vital all-ages place open!

On Tuesday, Comedy Roadkill returns to The Complex, featuring the likes of Brian Pope, Clint Lehmberg, Natashia Mower and the gang in Toy Soup. The best part, it's absolutely free! Show kicks off at 7:30 p.m. with an open mic, followed by the headliners starting at 8.

Next Saturday in Magna at Art On You Studios, the fourth-annual Inkathon will take place, starting at 10 a.m. The shop's regulars and guest artists will be inking up everyone they can, with all proceeds going to the Humane Society of Utah, all the way until 8 p.m. The Society is working on Doggy Domain, which will be the sister station to Kitty City that was opened last year.

The following Sunday, the People's Market returns to the International Peace Gardens, opening up the earliest it ever has, with a wide selection of traders and seed swappers, crafters and artists, vendors and performers and a few other surprises that will probably pop up. Head over and check it out -- get into the rhythm of it before the Farmers Market starts doing its thing.

The majority of the following week is mostly concerts; the first abnormal show that comes around is The Paul Duane Show happening at The Complex. Much in the vein of a late-night talk show, your cross-dressing host will have Ninevah Dinah, director Richard Duitcher and the current Miss Utah, Kara Arnold, in the house to interview, along with Oh, Be Clever serving as the house band. Tickets are $10 and can only be purchased through his website; get them while you can!

And finally in two weeks time, I'll have an I-can't-speak-much-about-it-as-it's-from-SLUG Magazine (full disclosure: That's my dayjob), but it will be holding its first-ever SLUG Ca -- an extravagant alley cat through the streets of SLC for all you bike lovers out there. Go check it out for details.

As for the blog: Well, that's the biggest mystery of the weekend, as I'm not quite sure what's happening. A lot of things were in the works, and then, like a tidal wave crashing on the shore, everything was washed away in a single day, for various reasons. So, as I write this, I'm doing a lot of planning for the next two weeks from scratch. But hey, at least that adds to the fun of reading, as not even I know what will be on here in a matter of days. You'll just have to come back to see what happens.