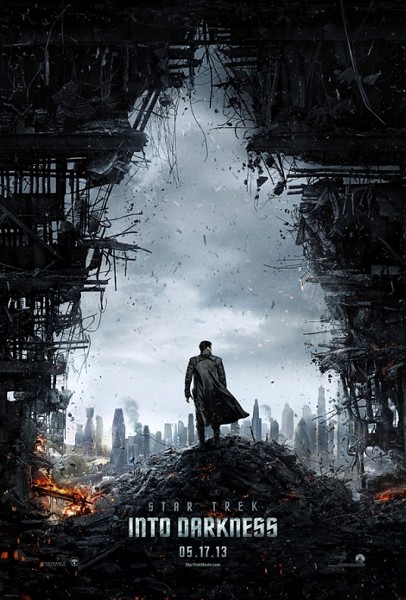 When it's time for a new Star Trek movie, you know it's time for the hacks to go blandly where they've always gone before: lazy references. ---

Like any familiar franchise entry, Star Trek Into Darkness comes ready-equipped with quotes and familiar touchstones so critics can nudge readers with them and avoid creativity. I wonder how many variations we'll see on "to boldly go," for example?

“To boldly go where a Star Trek film has gone before. That’s my main beef…” – Paul Chambers, Movie Chambers

“It doesn't boldly go where Star Trek has gone before. The story slips out of warp drive and into impulse power…” – Gary Wolcott, Tri-City Herald

“While not marking as significant a step to boldly go where few science fiction sequels have gone before, Abrams makes a very entertaining one…” – Jeffrey Lyles, Lyles’ Movie Files

“Expecting a Star Trek sequel to boldly go where no movie has gone before would be highly illogical.” – Joe Williams, St. Louis Post-Dispatch

“Star Trek Into Darkness is a first-class ticket into outer space. If you feel the urge, rocket yourself into blockbuster happiness. … This movie boldly goes.” – Bruce Kirkland, Jam! Movies

“Star Trek Into Darkness may be going not so boldly back to the archives, but it serves up an exhilarating spectacle …” – Claudia Puig, USA Today

“[I]t does go — albeit more cautiously than boldly — where his previous film hadn’t gone before…” – Mike Scott, Times-Picayune (New Orleans)

“Star Trek Into Darkness is a giddy homage to what’s come before it, but it also at least tries to go boldly where ... well, you know.” – Bill Goodykoontz, Arizona Republic

By comparison, then, other reference points seem almost imaginative:

“…fast and fun, zipping along on all thrusters…” – Rafer Guzman, Newsday

“Star Trek Into Darkness moves at warp speed … Abrams and his ace editing team set their phasers to stun in a series of exciting and slick set pieces.” – Jason Buchanan, TV Guide

“Star Trek Into Darkness is out of this world. … Beam yourself up for this one.” – Tom Long, Detroit News

Let's all now set our phasers on "oh, for the love of God, please stop."