Writing about the LDS faith as an outsider can be tricky; pop culture is rife with mocking representations of members. So, imagine the minefield that local artist Chris Hoffman is wading through as he launches his comic book Salt City Strangers, featuring an all-LDS superhero team. ---


“Utah and members of the church don’t get a fair shake in modern comic books,” says Hoffman. “Godzilla was here once, tearing down the Church building. One of She Hulk’s secretaries in her office is LDS.”

Hoffman came to the idea because of an offhand comment made by movie critic Roger Ebert in a review of the film Constantine. 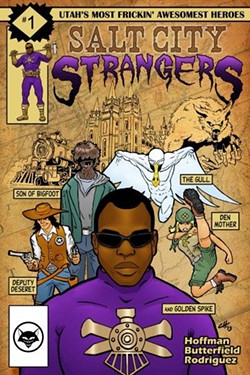 “Ebert said it was always funny that movies about Satan need to have the Catholic Church involved. He asked where the other religions were. I took it one more step and asked, 'Where were the Mormons.' ”

Hoffman is not LDS, but he’s lived in Utah his whole life. Naturally, that experience informs the characters in Strangers. 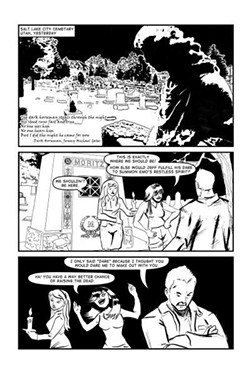 Resorting to stereotypes is an easy crutch for writers. Hoffman was extremely careful to stay away from that, running many of his jokes past friends who are either current members or former members of the LDS Church.

“I had to be extremely careful. At first, there were a bunch of jokes I brainstormed I thought were going to be hilarious. I didn’t want to be offensive, but I also didn’t want to ‘sanitize’ the story.”

One of the characters, Deputy Deseret, carries Orrin Porter Rockwell’s guns. Another, Son of Bigfoot, was discovered after a rash of Bigfoot sightings in Provo Canyon, then was taken in by a local family who raised him as a member of the church.

“There’s a joke where he -- Son of Bigfoot) -- has the strongest personal testimony of the group. He tries to get everyone together for a family-home-evening type of activity. He cares about the team like a family. I originally was going to give him all the stereotypes of a “Peter Priesthood” type, but my LDS friends said it was too close to being offensive, so I dropped it. I might bring that back if I can find a way to make it part of his character and not as a way to mock members of the church. I don’t want it to be a spectacle. I want it to come across as his point of view.”

The comic has been well received since its release on Free Comic Book Day a few weeks ago. Hoffman says he hasn’t heard any negative comments.

“When it was released, a woman asked me if it was ‘anti-LDS’ or ‘pro-LDS. I told her it was basically ‘Swiss-LDS’ -- very neutral. On the day it was released, one person who had bought an issue came back two hours later and bought eight more to give to their friends and family.”

Hoffman self-published the first issue. It took him more than a year, from concept to final product. He’s hoping the second issue won’t take that long because he wants to make it a little more tied into current events. He might even bring in Gov. Gary Herbert and Lt. Gov. Greg Bell as characters.

“One of the funniest things about Gov. Herbert is he sometimes talks like the Wu Tang Clan.”

Wait ... what? I think that’s probably the first time in recorded history Gary Herbert has been mentioned in the same sentence with the Wu Tang Clan.

“He says the word ‘recognize’ like Wu Tang does. He says ‘reconize.’ It makes me laugh every time. I’d like to play off of that. Maybe Herbert and Bell govern and legislate during the day and patrol the mean streets of Salt Lake City at night.”

But right now, those ideas and others for the second issue exist only on a series of note cards. Hoffman thinks he might turn to the popular crowdfunding platform Kickstarter to fund the next edition of the book.

[Editor's note: Listen to a podcast of a conversation with Chris Hoffman here.]