Unfortunately, the only thing memorable about the bout was that the skaters spent 80 percent of the playing time standing still. Yes, roller derby with little actual rolling. WTF?

Sure, this space could be spent entirely ranting against yet another roller-derby experience ruined by a half-assed wedding DJ who doesn’t understand that derby was built on rock & roll, not tired ‘80s pop hits or, for fuck’s sake, “Gangnam Style.” None of the local leagues get it anymore, so I give up—go ahead, treat your bouts like a shitty 1989 prom.

I don’t know—nor, as a spectator, do I care—when flat-track roller derby rules got to the point where the pack can just stand there while scorers circle in a so-called “power jam,” but it’s gotten to the point of utter ridiculousness. Players and refs can try and explain all damned day to me about Women’s Flat-Track Derby Association rule set No. 956 and “strategy,” but as Average Joe and Josey there to see what’s touted as a fast-paced “extreme” sport, watching a bunch of stationary women teetering in place on quads is pretty fucking boring, and most venues don’t sell enough beer to counteract it.

So, until local flat-track leagues knock it off with the Stopper Derby, I ain’t going to the bouts. I’ll still post scores and photos here, as there are now more excellent local derby photogs than ever before (and they can make it look like there’s actual movement on the track), but that’s it. I’ve been writing about local roller derby for almost eight years; recapping Stopper Derby bouts is just a drag. I support the former, not the latter. 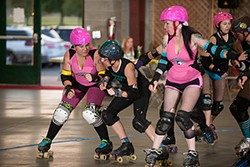 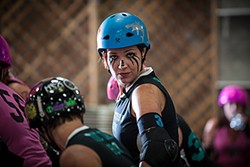