2013 has seen a major influx of stand-up comedians steal the show at comedy clubs, both popular and underground. --- Those names coming up through the ranks are putting a new shine on the profession and giving local audiences a new batch of shows to check out that they haven't seen before, which won't cost them a ton of cash, either. One of the newer names gaining prominence has been Natashia Mower, with whom I chat today about her career and thoughts on the local comedy scene. (All photos courtesy of Mower.)

Gavin: Hey, Natashia. First off, tell us a little bit about yourself.

Natashia: I'm 25 years old and I've lived in Utah my whole life. I've lived all over the state but currently reside in my parents basement in Taylorsville. I was an English major at the University of Utah but dropped out to pursue my love of customer service. Aside from being passionate about comedy, I'm a big lover of animals, soccer and things that are salty.

Natashia: I've always been a big fan of comedy, and I remember being in 10th grade when I started watching a lot of the Comedy Central Presents. It was instantly appealing because I'd never heard adults talk so honestly. It was new to see people use self-deprecation to turn their differences and insecurities into something that was okay and usually relatable. I remember seeing an old HBO special Ellen DeGeneres had done in 1992 or something and that was a big influence. After that, my favorite comedians were those who had a unique voice. like Laura Kightlinger, Bill Burr and Maria Bamford.

Natashia: There's nothing I've ever been as fond of or passionate about as stand-up. I had been writing joke ideas down since I was 14, but there wasn't anything that officially made me try it. I knew I wanted to but I had absolutely no idea how. I wasn't even sure how to compose a joke using the ideas I'd written down. The first comedy show I ever went to was to see Maria Bamford in 2008 at Wiseguys Ogden and I asked her for advice on how to start. Any really good comedian will tell you the same thing: Just do it,which made total sense after the first open mic I ever did in 2011.

Natashia: It was an eye-opener. I had no idea Utah really even had a local comedy scene, having only focused on what was going on in the bigger cities for comedy. There were more people doing it here than I'd realized, which was a really good thing. Like a lot of people, I was pretty rough on stage at first, but everyone kept encouraging me to keep going. I received a lot of support at open mics and was able to get my first shows not long after starting from people like Steve McInelly -- founder of K-Town Komedy --who put me on their own shows.

Natashia: I learned a lot about what it means to have confidence onstage. I used to, and still do, get really nervous sometimes, even if I'm just performing at an open mic and I realized I could fake confidence and end up doing well. I also got used to learning from failure. I would get so fixated on wanting my set to go well that I wouldn't end up taking any risks on stage. Now that I've started doing that, I find new ways to make things funny and expand on certain jokes. 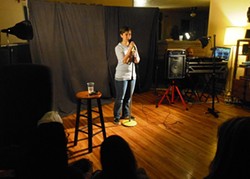 Natashia: It can definitely be difficult. I'm not particularly good at coming up with long bits or story telling, so I have to wait until I have an idea that can be delivered in a strict setup and punchline style. I'll usually try a new joke three or four times and decide if I want to keep it after that. One helpful thing about Utah in terms of trying out new material is how different each city is. I can tell a joke that kills in Provo but only gets stares in Kearns, so I get an idea of what type of material works with certain audiences. It also helps me be more confident when I can make a group of people laugh at a joke that I was hesitant to tell them at all.

Natashia: I love it. There's a great amount of talent that motivates me to get better, which is a blessing in disguise. I recently participated in a comedy competition at Lumpy's South called "Last Comic Sandy" and was lucky enough to place third behind Christopher Stephenson and Cody Eden. I felt really confident and proud of myself until I did a show with them. Cody destroyed for over an hour, and watching him made me realize how much work I have to do, which is what I want. It's a great opportunity to be able to see people perform at a level you hope to be at one day. There are a few local comics who motivate me to try to get better. The saying "If you're the smartest person in the room, you're in the wrong room" comes to mind; just replace "smartest" with "funniest."

Gavin: You've mainly been performing on the underground circuit in Utah. What has it been like building up your career through those shows, and what's your take on that audience?

Natashia: It's been a slow but steady process. I get a few open mics a week to try out material, and I usually have one or two shows a month where everything comes together. I like that there are diverse audience types here; it gives comedians a lot of opportunities to experiment with what material works with certain types of crowds. It really depends on where you perform; people are either eager to see comedy or completely apathetic to what's happening in front of them. Most crowds in Salt Lake are fine with most types of material, but there are a few places where I've had to plan my set around what's considered acceptable to laugh at. Some comics will shun places like that, but I think of it as another way to test my jokes.

Gavin: You've been performing for a couple of years now at a point where our stand-up scene is seeing real growth. How has it been watching it develop and seeing the talent come out of it today?

Natashia: It's been interesting to see the scene evolve. I've noticed more and more people coming out to open mics to try doing comedy and I genuinely think it's getting better. Open mics can be a grueling experience, and it's gotten less and less so as people who are coming out get funnier. I'm also proud to see more people taking advantage of stage time and being open to different venues. There used to be a lot of comics who strictly went to Wiseguys or only performed at bars, but that's happening less, for the better. 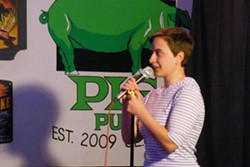 Natashia: I haven't done comedy regularly anywhere else so I don't have a comparison, but I think the local scene is good and will get better as it goes. Salt Lake has a lot more talent than people are aware of. There are comedians here who expand on what can be funny and different ways of doing stand-up. However, there is often a lack of support between comics and their different projects. People will want to be included in shows and whatnot, but won't promote or support each other's events.

Natashia: We get a decent amount of venues to let us do comedy, but they really don't try to promote it at all. That responsibility is mainly left to the comics themselves -- including myself -- who can get lax about promoting events. I think there just has to be more enthusiasm for even the smallest things, like a weekly open mic. Promoting each other's shows and spreading the word is the biggest thing. I try to go to as many local shows as I can to support people I see working on their sets every week at open mic.

Natashia: Oh boy, there are quite a few. I try not to miss when Andy Farnsworth and Steve Soelberg are onstage; they are great at what they do. I never get sick of seeing Christian Pieper, Lamar Kellywood, Jackson Banks or Abigail Petterborg. They make me envy their jokes and stage presence while I'm laughing my ass off.

Ntashia: I'm grateful for every stage we're able to perform on, but I don't see many venues trying to bring in crowds for comedy shows. Wiseguys is different because people go there expecting comedy and you know you'll usually have a really good crowd to perform for. Places like The Complex offer invaluable stage time but don't try to attract audiences for the comedy, so there's a lot more pressure in every aspect of the show. That said, every minute of stage time can be used to your advantage, regardless of the crowd size.

Ntashia: I've noticed more and more comedians I'm excited about coming to Utah over the last few years and it definitely helps promote awareness of the local scene. I know people who have seen local comics open for headliners coming through town and become fans of local comedy because of it. It's also really helpful to be able to interact with those comedians and get insight into what other places are like for comedy. I was able to open for Thai Rivera when he was in town, and after the show he gave me advice that I've employed almost every time I've performed since then.

Ntashia: I've been doing the same jokes for nine months, so I will mainly be focusing on new material. Keep coming out to Lumpy's South on Mondays, The Complex on Tuesdays and Wiseguys on Wednesdays to check it out.

Ntashia: I'll be performing at Lumpy's South in Sandy on Saturday, June 15 at 8 p.m., and hosting for John Hilder at 5 Monkeys in Murray sometime in July. I'll have more info on those shows on my Facebook and Twitter. Also, like SLC Comedy Scene on Facebook.