In Jamaica, you'll find folks selling grilled chicken at roadside stands all over the island. As with gumbo in Louisiana or cassoulet in France, there are as many different recipes as the people who make it. ---

Supposedly, the word "jerk" derives from a Spanish term of Quechua origina: charqui, which means dried or jerked meat. Eventually, that's where "jerky" in English came from. Nowadays, the culinary word jerk has come to refer both to a spice blend and to the technique for cooking jerk-style chicken.

I've tried a number of different recipes for jerk chicken. Some were incredibly complex and some were as simple as just rubbing the chicken with store-bought jerk seasoning and cooking it. I finally settled on this recipe, which I think has great flavor, but still tastes like chicken. It's got some heat from the Scotch bonnet peppers (the world's most incendiary chile!), but also tastes sort of sweet, thanks to spices like nutmeg and, especially, allspice.

If you have time, prepare the chicken in advance and allow it to marinate in the fridge overnight for maximum flavor.

Have all your chopped ingredients ready to go.

In a blender or a food processor, place all of the ingredients except the chicken.

Puree the jerk marinade until it's the consistency of a thin paste. If the marinade is too thick, add a little more soy sauce to loosen it up a little.

Pour the marinade over the chicken quarters and turn to coat both sides. 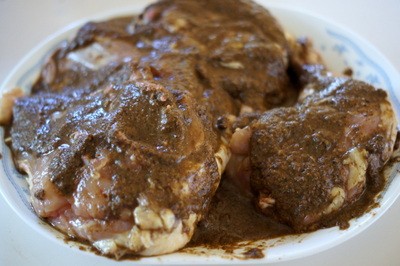 Refrigerate the marinated chicken until read to cook, preferably overnight.

Bring the chicken to room temperature prior to cooking -- about an hour.

Grill the chicken quarters over a medium-hot fire, turning once or twice, until cooked through, basting occasionally with any leftover marinade. I cook my chicken at about 375-400 degrees F.

When finished, the breast should register 160 degrees F. on an instant-read thermometer and the thighs should be at 180. The cooking time is about 35 to 40 minutes or so, depending on your grill. Don't worry if the skin blackens some, that's the way it usually comes in Jamaica.

By the way, the tinfoil packet in the photo contains wood chips to give the chicken a smoky flavor -- highly recommended. In Jamaica, jerk chicken is often cooked over coals but also with fresh green wood, traditionally from the pimento tree, which imparts a sweet, smoky flavor.

Serve with traditional Jamaican rice and "peas." (I'll provide a recipe for rice and peas in next week's Monday Meal.)