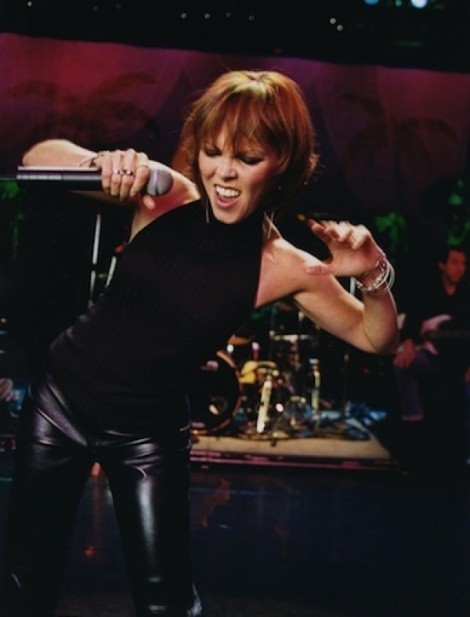 Attending a Pat Benatar show 35 years removed from her explosion on the scene creates a sort of visual disconnect. The songs, mostly about youthful rebellion, seem strangely out of place—especially since the crowd is mostly aging Gen Xers and baby boomers. ---

But, those same songs have a new resonance—a subtext about how, despite the pressures of growing up (and growing old), it’s still possible to capture moments of youth long past.

Let’s get one thing straight: Benatar can still bring it.

Holy crap, can she bring it!

Her Wednesday-night tilt at the Sandy Amphitheater did not disappoint the near-capacity crowd, as she and husband, Neil “Spyder” Giraldo, powered their way through an 11-song set that touched on every part of their 35-year musical partnership.

It’s common for singers to lose some of their range and power as they get older. Not Benatar. There was only one moment during the 90-minute show where she failed to reach the expected “Benatarian” heights—yes, I just made up a word; shut up. During the opening of “Love Is a Battlefield,” she chose a lower run of notes on one line than she had on the original.

The rest of the show was a graduate-level workshop on powerful rock & roll vocals. Her distinct raspy wailing that immediately jumps to mind when someone says “Pat Benatar” was in vintage form. Throughout the show, glimpses of the angry young singer bubbled to the surface.

Benatar also demonstrated an absolute command of the stage that has not diminished since the halcyon days when she ruled MTV. Even when she wasn’t singing, you had to remind yourself to pay attention to the other musicians, including guitarist Giraldo.

Benatar is the flash and sizzle of the show, but Giraldo is the anchor that keeps it all together. His impeccable guitar work would itself be worth the price of admission.

It’s interesting that the major thread running through the show was the 35 years Benatar and Giraldo have been making music together, which includes 31 years of marriage. It’s clear they still enjoy each other’s company and haven’t tired of the road. There’s a comfortable familiarity to their stage presence that is striking, given how most entertainment marriages/collaborations are temporary and disposable.

Little things, like an affectionate touch of the arm, remind you that despite their years together, there’s no other place they would rather be.

A personal note/complaint: I’ve seen Benatar in concert five times since 1984. During all of those shows, I have never seen her perform “Fire & Ice.” Not once. I understand there are certain songs that are mandatory -- “Hit Me with Your Best Shot,” We Belong” and “Heartbreaker” -- but, you'd think by sheer numbers it would have happened at least once.

Benatar's musical catalog is so expansive, she naturally has to leave something out. It’s kind of a pity that two Grammy-winning songs, “Fire & Ice” and “Shadows of the Night,” didn’t make the final cut for this show. The absence of those songs didn’t diminish the final product. How many other artists can casually omit half of their Grammy winners without anyone really noticing?

Wednesday night demonstrated that Benatar is still near the top of her game, and it doesn’t feel like she’s going to slow down anytime soon.