My experience playing a musical instrument is minimal, limited to one painful year in the fourth grade, where I was forced to learn the recorder. After my gawky fingers fumbled over the surface of the flute-like instrument, my teacher advised me to rest and let my classmates give it a try.---

Luckily, that experience did not dampen my appreciation for classical music. On Wednesday night, I attended the Utah Symphony’s patriotic showcase at Thanksgiving Point. I’m no hoity-toity symphony snob who loves her in piano nocturnes in E-flat major, but I do love the occasional Bach and Chopin.

And this symphonic event was an evening of splendor at the waterfalls of Thanksgiving Point, from the grassy-sloped amphitheater to the lively conductor. It was an easygoing way to celebrate my country and steadfast patriotism without the flashiness of cheap fireworks, parades and large masses of people.

The music was exquisite. The opening number was, fittingly, “The Star Spangled Banner.” Many people in the crowd in red, white & blue attire (I’ve never seen so many distorted flags made into clothing before) sang along, which is surprising to me because polls show that two-thirds of Americans don’t know the words to our national anthem.

I also really enjoyed “Serenata.” Despite the song's Italian title, Leroy Anderson composed the song according to Latin rhythms. The sound of the violins made me long for a fella of my own to serenade me. My dad kindly suggested a gentleman seated on the patchwork quilts in front of us. He was a surefire doppelganger to Jack Black in Nacho Libre, and, fittingly, he was stuffing his face with nachos. But alas, I had my heart set on the mustachioed percussionist in the symphony.

After the intermission, John Philip Sousa's  “Manhattan Beach March" replicated the undulations of the sea, the to-and-fro of the music  soothing to the soul. The concert ended with a brilliant encore of Polish polka music before a final, rousing, American-style march. Oh, and there were fireworks instantaneously set off once the band stopped playing. Needless to say, I nearly went into cardiac arrest from the unsuspected disruption to my peaceful classical music.

Thomas Hong, the conductor, was a pleasure to watch. He was witty and continuously engaged the audience. He was short in stature, but large in life. He even jumped up and down on his podium during one song. Hong explained afterward, “I was told by my wife to get a little taller in the middle.” After fervent arm motions throughout the concert, he left a sweaty, but proud, man, proclaiming, “It’s on, yo!” 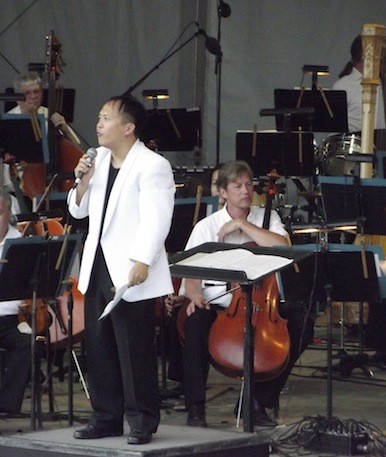 And each musician was just as passionate as the conductor. Music bows swung like swords over violins, and the trumpeters extended their arms and lungs to the utmost limits.

The scenery was also breathtaking. The natural surrounding was peaceful and fit the pace of the music. And sprawling across the green grass were lawn chairs and blankets alike.

A wide variety of people attended the performance. The two couples seated on the grass to my left wore formal attire -- the gentlemen in tuxedos,and the ladies attired in what looked like retired prom dresses. Since they were the only people in the audience who were gussied up, they seemed to attract a lot of curious attention. But if anyone asked about their clothes, they said, “We just wanted to go all out.” But, I overheard one of the young men tell his friend that the weather was a little warm for such attire. Even Gov. Herbert and his wife came to the show. 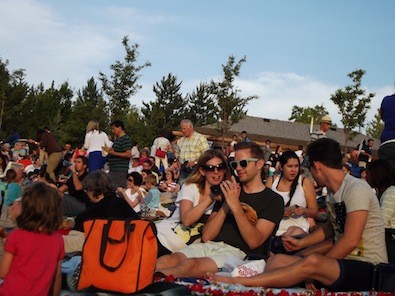 Of the huge crowd and the 60-plus band members, no one walked away disappointed at the end of the night. The performance was a musical and patriotic evening. And it inspired even the most amateur musicians, myself included.