The Flaming Lips at Twilight

There is no spectacle more illuminating than a Flaming Lips concert. The mind-bending rock band came to the Twilight Concert Series stage on Thursday night, put the audience in a musical spaceship and sent them off into a cosmic voyage of light and sound.---

The top-10 highlights of The Flaming Lips at Twilight:

1. Wayne Coyne cradling a baby: While writing their newest album, The Terror, frontman Wayne Coyne was also breaking up with his partner of 25 years, Michelle, as well as dealing with The Lips’ multi-instrumentalist Steven Drozd’s relapse into heroin addiction. 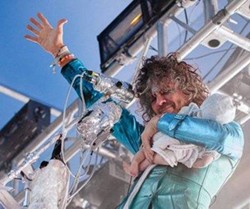 The Terror adheres to the same love story/space opera narrative that The Flaming Lips are famous for, but with a much darker approach. It’s more personally charged with turmoil, loneliness, depression and anxiety, which is why it was striking to see Wayne walk out onto the stage with a baby cradled in his arms. Albeit a fake baby, he still tenderly rocked it while kicking off the show, singing “Look ... The Sun Rising.” So wrong, yet so lovely.

2. Confetti bomb: Most bands will build up to a climax toward the end of the show; not so with The Flaming Lips. Two songs into the show, a huge confetti bomb blasted the delighted crowd. It set the bar for the rest of the show that would be continually met and raised until the very end of the night.

3. The alien intestine podium: Wayne preached the gospel of The Flaming Lips from a pulpit that looked like the guts of a pristinely dissected alien. The podium of tentacles coiled around the stage, creating a beautiful and grotesque effect. 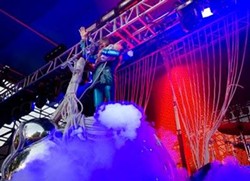 4. Zen: Every few songs, Wayne would sip some water and give a small sincere speech about living in the moment, loving one another and cherishing the time we have on Earth. Namaste.

5. The crowd: The Twilight Concert Series has finally figured it out. Charging people the controversial $5 entrance fee has really cut down on the riffraff, and has made room for genuine music fans. Although the show was still intensely crowded, the packed audience was hypnotized into one happy, dancing organism, but without the fear of being trampled or unable to exit the concert grounds. 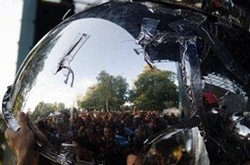 6. Wayne’s outfit: A fantastically dandy, shiny, aqua three-piece suit that looked like it was designed by Barbie— well, Barbie in a mental institution.

7. Also, Wayne is an alien: Given all his talk about outer space, celestial beings and the collective unconscious, it’s weird to hear Wayne say prosaic platitudes like, “We love you, guys” and “It’s great to be here.” It’s like hearing an alien who watched footage of some rock stars and then tried to mimic what he learned.

8. CSS: The opening band, CSS, seemed like the lovechild of Miley Cyrus and Bjork. With potential to be amazing, some songs were brilliant, but some were truly terrible. But, props have to be given to this spunky girl band that didn’t let the 100-degree sweltering heat keep them from being entertaining.

9. LOVE LOVE LOVE and double rainbows!!: When The Flaming Lips’ set was over, the word “LOVE” flashed across the backdrop for a full two minutes as the audience chanted in robotic unison. The ominous tone to the joyous repetition was dark and magnificent.

The show was so thrilling, much of the audience still begged for a double encore as the roadies began to pack up the stage.

10: The entire crowd singing along to "Do You Realize?": Awesome. Really. You should have been there.

All photos by Austen Diamond