As if the forest floors of Central America and the Caribbean weren't terrifying enough, what with poisonous snakes and foot-long centipedes, Jack Longino, a biologist at the University of Utah, has recently identified 33 new species of "nightmare ants."---

According to Longino, “Their faces are broad shields, the eyes reduced to tiny points at the edges and the fierce jaws are bristling with sharp teeth. They’re horrifying to look at up close. That’s sort of what makes them fun.”

Unlike most ants, these new species are predatory. Below are two pictures of the front and side views of a new ant species named Eurhopalothrix zipacna, which is found in Guatemala and Honduras and was named for a violent, crocodile-like Mayan demon. Longino named many of these new species after Mayan lords and demons because “they’re from Central America, live in the dark leaf litter on the forest floor -- kind of like the underworld -- and they look pretty demon-ish, ” said Longino.

These new species feature a labrum -- jaws that open and close sideways, instead of up and down -- that adds to their frightening appearance. 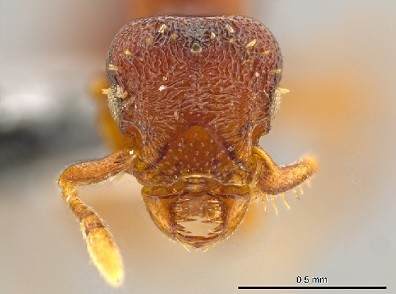 "Although these ants may look terrifying, they are way too small to sting us," Longino says. "Thus, they pose no threat to humans. Some of these ants are venomous, but to them, we would be like a giant brick wall."

Ants play an important role in many ecosystems, Longino says. “They are major movers of stuff. Some act as predators and influence the population sizes of other insects by eating them.”