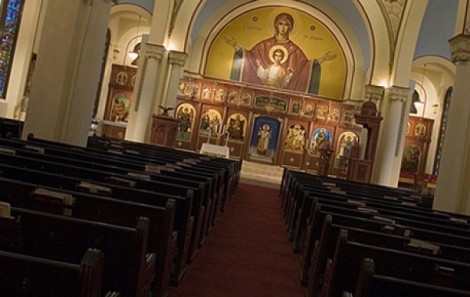 The Metropolitian Isaiah, head of the Greek Orthodox Church of Greater Salt Lake City (which is a single parish with two churches -- the Holy Trinity Cathedral in downtown Salt Lake City and Prophet Elias Church in Holladay) has ordered that both churches discontinue offering sacrament, liturgy, weddings and baptisms indefinitely as of Sunday, August 4, 2013.---

The surprise decision marks a bitter climax in a power struggle for the future of the Salt Lake City-area's Greek Orthodox parish. A call seeking comment from Rev. Matthew Gilbert of the Holy Trinity Cathedral was not immediately returned.

The Metropolitan's decision followed years of discussion, political maneuvers, and embittered finger pointing that on July 30, 2013, culminated in a letter sent out by the 14-strong parish council, cutting the salaries of the three priests employed by the two churches by 40 percent in the face of a chronic deficit. "Our community is out of money and unable to meet payroll this week," council members informed the parishioners in the letter, which was posted on a local blog.

The three clergy account for 32 percent of the Salt Lake City parishes $1.2 million annual budget, according to figures the council provided to parishioners attending the May 2013 annual parish assembly. The salary cut equated to annual savings of $124,890 a year.

By locking the doors of the cathedral and Prophet Elias to the spiritual needs of the local parish, the Metropolitian Isaiah appears to have called a strike of the community's clergy, until their full salaries, the levels of which are set by the New York-based Archdiocese, which oversees the United States' Greek Orthodox community, are reinstated, along with back pay.

Greek Orthodox Church parish council president Dimitrios Tsagaris described the decision to cut the priests three $100,000-plus annual salaries and the Metropolitan's response, as "an internal issue. We are working with the Metropolitan and the community to find a solution. We had to take this action." The Metropolitan's decision "was the result."

With emotions once more flying high in the Greek community over what many see as an ongoing power struggle between Denver and a substantive pro-unity group of Salt Lake City and Holladay's parishioners who have resisted for years against pressure from Isaiah to split the single parish into two parishes with two sets of clergy, members and financial management, Tsagaris said, "Tempers have to calm down. We will work together and everything will be fine."

The division within Salt Lake City's Greek church community has been marked by secret meetings held by a group of parishioners to split the parish -- including the secret formation of a new Prophet Elias Corporation -- in a manner that circumvents a methodology and practices set in place decades ago. This was coupled with a letter to the community from the Metropolitan that included allegations of theft and robbery made against nearly a dozen high-profile parish members. After a private meeting with parishioners, the Greek Orthodox Archbishop of North America, Archbishop Demetrios, mandated that the corporation be closed. Also, hundreds of local parishioners petitioned for an apology to be issued to those parish members accused of being "robbers." Neither occurred, which was interpreted by many in the community as the Denver Metropolitan and local clergy snubbing their nose at Archbishop Demetrios and the community itself.

Later, a lawsuit was filed by parishioners who petitioned for their rights as Greek Orthodox corporation members (legally separate from church membership) intent on achieving transparency in the church's muddy financial and operational affairs. Tensions rose so high that police were called out to a November 2011 vote over whether the parish should adopt regulations that would bind it tighter to the national church, resulting in the Metropolitan banning the five parishioners who signed the lawsuit from taking part in that vote, leaving several parish elders outside in the freezing cold. Parishioners ultimately voted 3 to 1 against those regulations, which many saw as potentially leading to a loss of control over assets the church and its community had built up over decades.

The ongoing fight saw stewardship pledges of money to the church decline as members, upset by the increasingly political and volatile struggle for the future direction of the church, voted either with their pocketbook or their feet. The parish council has estimated that in the last five years up to 25 percent -- or 300 people- - have left the two churches.

While the three priests would not be providing services for the foreseeable future, parish-council members informed community members that the churches would be open on Sunday for those who wished to pray there and light a candle.