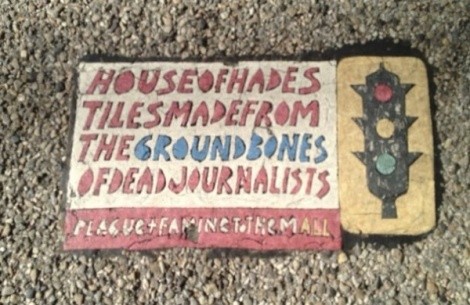 Salt Lake City has joined the ranks of more than two dozen cities across North and South America to have received a mysterious tile, embedded in the asphalt. The so-called “Toynbee tiles” have been appearing in streets since the 1980s, bearing cryptic messages of an unknown origin.---

In July, a tile appeared in Salt Lake City at the northeast corner of State Street and 200 South, bearing an ominous message—especially for local media—reading: “House of Hades Tiles Made From the Ground Bones of Dead Journalists. Plague+Famine to Them All” (pictured).

The tile appears to be in the same style as others that began popping up, mostly in North America but that have also been documented in four South American capital cities. No one quite knows who has placed the tiles, whether they act alone or if the original tiles have just been replicated by copycats. No one knows for sure what the hell the tiles' messages are supposed to mean, either, though they've certainly ignited a storm of speculation and conspiracy theories.

The Baltimore Sun first reported on the tiles popping up there in 1994, noting several tiles reading, “Toynbee Ideas in Kubrick's 2001 Resurrect Dead on Planet Jupiter.”

These first reports helped get the tiles their name and reference Stanley Kubrick's classic 2001: A Space Odyssey, as well as the writing of historian Arnold Joseph Toynbee.

True to the apocalyptic feel of the tiles that have been appearing in city streets around the world, Toynbee's work as a historian is best illustrated by his seminal work A Study of History, a 12-volume analysis of the rise and fall of civilizations published between 1934 and 1961.

The work challenged the idea that Western Civilization was immune to the boom-and-bust cycles that other great societies and cultures had succumbed to. Toynbee's works, written in the wake of World War I and during World War II, argue that, historically, while civilizations often flourished by responding to specific challenges—overpopulation, famine, war—that disintegration was nevertheless inevitable.

“[The] fundamental similarity in the purposes of all civilizations is not to be forgotten. Each seed has its own destiny, but the seeds are all of one kind, sown by the same Sower, in the hope of the same harvest,” Toynbee writes. “When this happens, the society enters on the road to disintegration.”

Whatever the meaning, the tiles have certainly grabbed the attention of many. The tiles have been documented in the New York Times and other major publications and were even the subject of a 2011 Sundance Documentary. Now, Salt Lakers can get a glimpse of the mystery for themselves. Just don't get too wrapped up in the mystery, since the tile is right inside a busy intersection.