For old-school punk fans who want a podcast to call their own, guess what? You got one. --- Channeling the hardcore and punk scene from Salt Lake City's past, San Clemente Punk is a show that plays old-school hits along with the rising bands kicking out doors today, plus interviews with those who pop by to talk to the show's longtime punk host. I chat with the host, Frank Carroll, about his love for the genre and the show itself, plus his thoughts on podcasting. (All pictures courtesy of the show's Facebook page.)

Gavin: Hey, Frank! First thing, tell us a bit about yourself.

Frank: Well, I am a punk-rock kid who never grew up. I am from Philly originally, but moved to SLC after being all over the U.S.

Gavin: What first got you interested in music, and what were some early influences on you?

Frank: I first got interested in punk rock when I was growing up in Philly. I was a skateboarder and was close friends with Chuck Treece and Tim Glomb. Chuck is one of the most gifted musicians ever and played in and founded McRad. When I moved to Delaware, I had to find another scene and found the boys from Infection. From there, I bought a lot of vinyl and tapes and shaved my head.

Gavin: What was it like for you joining bands and coming up through punk music?

Frank: I loved punk for its ability to accept everyone and stand tall against threats. It was a family that may have fought amongst itself but would not let others push one of us around. I was in a band called Suspicion Of Ignorance; very short-lived and inspired by bands like Pagan Babies, Ruin and Flag Of Democracy. We played for about a year and made a total of about eight bucks.

Gavin: What brought you to SLC, and how was it living here compared to Delaware?

Frank: I moved to SLC after  a divorce and wanted to snowboard here. The scene here is a lot different and VERY fragmented.

Gavin: When did the idea come to you to start up a podcast?

Frank: My brother was doing his podcasts All Hail Hair and Fightin' Words on the Fightin' Words Radio Network on Blog Talk Radio. I was helping him with the board and wanted to do my own show. I talked to Chuck Treece about helping out and co-hosting. I started out nervously one Monday night and have been on the Web since.

Gavin: What made you want to do an old-school punk show, and where did you get the name San Clemente Punk?

Frank: I love old-school punk -- back when bands played political song, when they wrote about injustice. You don’t see that anymore. There are some bands that do still write that, like "Beasts of no nation" out of D.C. They are a great punk band that have a message. By and large, though, it is the pre-packaged shit on the radio people call punk. I want people to know what real punk is like. It all went downhill when they called Blink 182 a punk band. I got the name when Chuck and I were talking. He said he always liked the city of San Clemente. So, I ran with it, and San Clemente Punk was born. 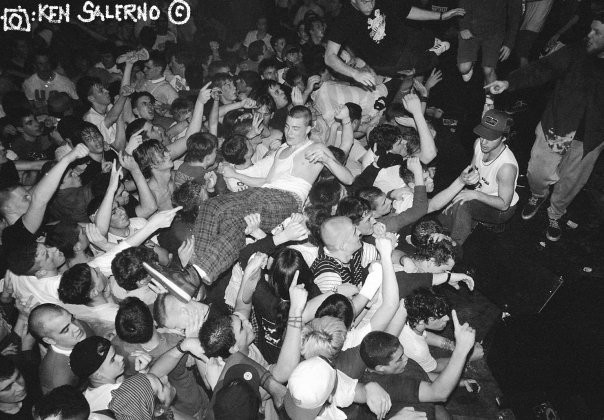 Gavin: What was it like for you gathering the equipment to produce a show?

Frank: It is just a cell phone and a computer; that simple. Anyone can do it for 40 bucks a month.

Gavin: What were the first few shows like for you, and what was the public reaction to it?

Frank: There were nervous rantings. I was not sure what to say about bands and history of bands. The public reacted slowly at first. I actually have most of my 20- 30,000 average listeners a week overseas.

Gavin: How do you go about choosing the playlist and deciding what to show off to listeners?

Frank: I choose a wide array of bands, from old-school to new bands to locals. I love hardcore also, and was lucky enough to see a lot of legendary hardcore bands in NYC and D.C. and Philly. I have played a lot of locals and would like more. People can contact me on Facebook at San Clemente Punk on there or sanclementepunk@yahoo.com. The locals here in Salt Lake are very good and I want to get them heard. I have featured Drunk As Shit, Year Of The Wolf, Never Say Never, Venzetti Crime, Dr. Drug and the possible side effects, Problem Daughter, Endless Struggle and a lot more. Drunk As Shit, though, is a favorite. They are the best street-punk band in Utah. On the hardcore side, Cool Your Jets is a juggernaut of hardcore here in Salt Lake.

Gavin: How important is it to you for people to learn about punk's roots and how it came to be where it is today?

Frank: It is VERY important. People are standing on the backs of giants. Brad from Raunch is a fountain of knowledge on the subject. Stop by Raunch and learn the history of punk rock and punk rock in SLC.

Gavin: When did you first come across Fightin' Words Radio Network, and what made you decide to join them?

Frank: Like I said, it was my brother Bobby's network. After his murder in 2011, I took over the network and continue on today. He built it from scratch and it is now one of the biggest podcast networks on Blog Talk Radio.

Gavin: What do you hope to do with the show down the road, and who do you hope it reaches?

Frank: I would like to feature more locals. I have struggled to find an audience in Salt Lake even being a local. My worldwide audience has been great, though.

Gavin: What's your take on local podcasting today and the shows coming out of Utah?

Frank: Some of the local podcasts are great, very well done and produced. A Steady Diet Of Music is awesome, and I really respect Skunk for that.

Frank: People need to look for punk podcasts. They are all download-able after they air. Mine can be found by searching Fightin' Words on iTunes.

Gavin: What are some shows you believe people should be checking out?

Frank: I am the only punk-rock webcast on Blog Talk Radio. So, people could search for punk and find me. But, people should create their own; let their voices be heard. Check out SLUG's podcast Soundwaves From The Underground, and A Steady Diet Of Music on UtahFM.

Gavin: Where do you hope to see the medium going over the next few years?

Frank: I hope it grows, letting bands that are small and local have a platform to be heard. I really want Drunk As Shit to get heard.

Gavin: What can we expect from you and the show over the rest of the year?

Frank: More guests. I have interviewed so many great musicians: Monkey from the Adicts, Jeff Nelson from Minor Threat, Mark Unseen, Keith Morris, Jon Pebsworth, Vic Bondi from Articles Of Faith, Adam Phafler from Jawbreaker, Anthony from Combat Crisis, Knox from The Vibrators, Bobby Steele from The Misfits and The Undead, Chuck Ragan from Hot Water Music and his own solo stuff and a lot more.

Gavin: Aside from the obvious, is there anything you'd like to promote or plug

Frank: Yes, you can hear my show live every Monday from 5-7 p.m. locally. You can call in if you like, also. I will play any band that wants to be heard. I would also say that people need to check out what the Pyarte Punx are doing in SLC. Those guys are bringing great shows here. Nov. 21 they have The Casualties, Negative Approach, MDC, Cool Your Jets and the return of Never Say Never.