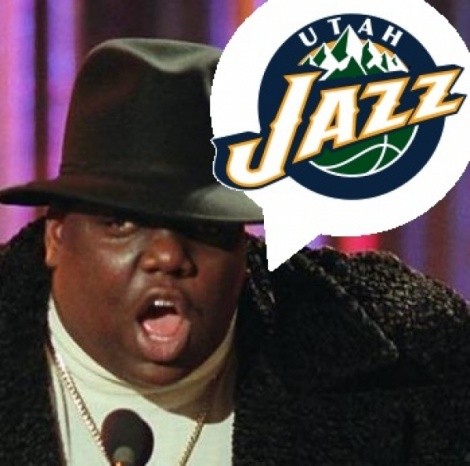 Rick Ross, the rapper most likely to never play in the NBA, once stated, “Rappers want to be ballers, ballers want to be rappers.” The eternal bromance between hip-hop and basketball is beyond obvious. Let's be honest: An NBA plug in a rap song is as boilerplate as a Ben Wallace air-ball. But besides the usual Jordan, Kobe and LeBron metaphors, one of the more common references is the classic nod to the Utah Jazz.---

Jay-Z, Biggie, Nas -- they've all rapped about the Jazz in one way or another and it makes sense. Though Utah isn't necessarily a rap epicenter, the peak of hip-hop's "Golden Era" (the mid to late '90s) occurred at roughly the same time as John Stockton and Karl Malone's prime. Plus, there are plenty of words that rhyme with "Jazz," and, unfortunately for diehard fans, Jordan's crossover on Bryon Russell in the 1998 NBA Finals will be rapped about forever. 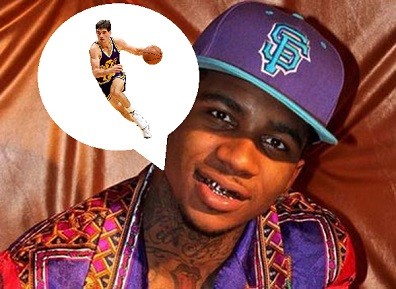 Lil B likes to think he looks like John Stockton


But because the list of Utah Jazz references in rap songs is longer that Tayshaun Prince's wingspan (I can keep going with these), I whittled it down to the top-25 best verses:

25 ."Red carpet on the sidewalk, I gotta step on it before I talk. Part investor of the Utah Jazz, I'm the real king of New York." - Kool Keith, Extravagant Traveler.

This is a typical brag-and-boast track. Kool Keith isn't, and never was, a part owner of the Utah Jazz. He's simply saying he has a lot of money and that he runs New York.

23. "Now I'm somewhere in Utah relaxing to Jazz with a broad, quarter mill in a stash, avoiding the law from far." - Rosco P Goldchain, Hot ft. The Neptunes

Rosco has $250,000 in cash stashed away while hiding from the law in Utah. The word Jazz has sort of a double meaning here -- he's either listening to Jazz and/or going to Jazz games with his girlfriend. Either way, Rosco is having a nice time in Utah.

Beenie Man is pointing out that this particular girl is smothering him like cologne, and she would prefer if he had intercourse with her deeply -- eh, sort of like how Karl Malone dunks a basketball.

21. "And now I'm naked on the couch wit Raisinets in ma mouth. I'm playin' a stupid Asian in NBA 2k12 and I'm beatin' that ass wit the Utah Jazz."- Lil Dicky, Staying In

Lil Dicky is relaxing at home eating Raisinets, a delicious chocolate-covered raisin candy. Not only is he beating an Asian (who, according to stereotypes, are known to be pretty good at video games), he's performing this feat while playing with the Utah Jazz, a team that was not highly ranked in NBA 2K12.

Sadly, Karl Malone never won an NBA championship; thus, he never got a ring. Kardi is saying he's not ready to settle down and marry.

J.Cole is stating that he'll pass on girls who are not that attractive, hence, the reference to Mark Jackson, who was known as a great passer in the NBA. Also, he's not interested in girls who are boring, sort of like the Utah Jazz (who used to run a lot of plays from the set). Mark Madsen was an NBA player who almost never played, reinforcing J. Cole's stance of not playing around when it comes to girls.

18. "Control schedules, take a clock and I turn it back. Why you talk, I'm in Utah like Hornacek doin' real estate, tryna get another corner shack (whoa)." - Chamillionaire, She Gonna Already Know

Jeff Hornacek was a shooting guard for the Jazz from 1994 to 2000 who was known for his strong work ethic. Chamillionaire is saying that he is willing to hustle extremely hard in order to purchase another home. His posse is impressed by this pronouncement, hence, the "whoa."

Action Bronson loves gourmet food and so he's announcing to the world his love for sesame seeds on delicious sea bass. While thinking about seafood, he's wearing his favorite pair of Adidas and sitting courtside at a Miami Heat-Utah Jazz game.

16. "Don’t want your money and I don’t gamble. Rap MJ and I got that game 6 handle." Charles Hamilton, I'm So Good

Charles is explaining that he has a handle on the rap game, sort of like Michael Jordan's handle on the 1998's game six NBA championship game versus the Jazz. This is also the game where Jordan performed his most famous crossover (handle) on Bryon Russell.

RZA is exaggerating. He claims that he's a gigantic human with the power of 18 men made of bronze. To make it even more clear, he claims he is the same height as Karl Malone, and he's as jacked-up as Larry Johnson.

14. "See, I'm jogging. Other niggas legs starts wobbling when opportunities start knockin. You got the crown, pass off like Stockton." - Joe Budden, Dumb Out

For Joe Budden, rap is easy, and so he's jogging his way through the rap game. Even if his opponents did win, the pressure would be too much and they would eventually pass on the title, like John Stockton, who was known for assists and never won an NBA championship.

Juiceman is explaining that the way he distributes drugs is very efficient, like a nail shop, which are known for their speedy service. He also carries six cell phones so that he can keep in contact with his many drug dealers, and when they call, he always "delivers" (Karl Malone's nickname was the Mailman).

When his girlfriend wakes up in the morning, Michael Rocks likes to take her shopping. He prefers to buy Polo shirts because they always look fresh and timeless. He's also very picky about his jewelry. This particular jeweler is decent, but not exceptional, when it comes to his diamond selection. Therefore, Michael Rocks would prefer a jeweler who was great with the rock, like John Stockton with a basketball.

11. "I'm equivalent to a Earl Boykins, Spud Webb, Muggsy Bogues. I suppose I handle the rock well, I do hoes like Stockton and Malone. Make my pick then roll." - Kendrick Lamar - Blood Sport Freestyle

Kendrick is literally a short individual, like Boykins, Webb and Bogues. However, even though he's a little guy, he's not to be counted out when it comes to interactions with the ladies. In fact, he picks his women similar to the way Karl Malone and John Stockton run their famous pick and roll -- meaning, he picks one out from the crowd and then they leave the club together.

10. "Like Rodman, I'm on my hustle, you shook up like Bryon Russell. The kush is Jazz purple, I'm takin' off from the free-throw." - Rockie Fresh, Driving 88 by Casey Veggies

Dennis Rodman was a player known for his tremendous hustle on the basketball floor, and Bryan Russell was a Jazz player made famous for getting crossed over by Michael Jordan in game six of the 1998 NBA Finals. Rockie is explaining that he's a hustler and that his weed is purple like the color of Utah Jazz jerseys. When he smokes it, he gets higher than Michael Jordan leaping from the free-throw line.

9. "The twinkle and diamonds upon my neck. More Jazz than Hornacek. I blast and leave your corner wet." - Nas, Quiet Niggas

Nas loves to wear a shiny, diamond-studded necklace. He's also the son of notable jazz guitarist Olu Dara, hence, he's more Jazz than Hornacek, who was a consistent presence on the Utah Jazz roster in the '90s. Also, when Nas shoots his gun, he leaves plenty of blood on the street corner.

8. "I'm like John Stockton, I don't even have to score. I just make the game better, by bein' out there on the floor." - C-Rayz Walz, Battle Me

John Stockton was known more for his assists rather than for his scoring. So, in other words, he made other players better by just being on the floor. In a rap battle, C-Rayz doesn't even need to speak -- he makes everyone, and the scene, better by just existing.

7.  "With this recording I'm as sick as Jordan before Game 6. Jazz talkin', I bet I pick and roll with your bitch." - Wale, Barry Sanders

When Wale says "as sick as Jordan before before Game 6" he means game 5 of the 1997 NBA Finals versus the Utah Jazz, a game known as Jordan's Flu Game. He then switches it up and gives props to the Jazz, who were known for running a great pick-and-roll game. However, like Kendrick, he also means he'll snatch up your girlfriend.

6. “The Spud Webb ticket, with the Larry Bird yay and it's jumpin' from the free throw like MJ. See my 'Vette pass by like a Steve Nash pass. Stay loyal like the fans of the Utah Jazz." Gucci Mane, Hold Dat Thought

Even though he's short like the 5'3' Spud Webb, Gucci Mane should not be underestimated. Plus, his cocaine is the real deal (like Michael Jordan) and it keeps his junkies loyal like Utah Jazz fans (who have dealt with many losing seasons).

5. "Far from a thug, but I'll drop one. Far from a scrub, but I'll mop them. Watch them, better leave 'em alone like Stockton. When he retired." - J.Cole, 93 Til Infinity

J. Cole is saying that he's not a criminal but he'll act accordingly to anyone who steps to him. However, he also avoids confrontation -- hence, the line "leave them alone like Stockton," which is heard as "Leave them Malone like Stockton." This has a double meaning and refers to when Stockton left Malone after his retirement in 2003 and to Stockton's standoffish personality. All-in-all, J.Cole is very knowledgeable when it comes to the Utah Jazz.

4. "I make moves that remove pebbles out of shoes. You suck pistol like pipe with the crystal John Stockton couldn't assist you." - Jay-Z, Bring It On

Jay-Z is explaining how good he is at selling drugs. At a point of sale, he'll remove crack rocks from his sneakers and sell them to his customers, who then smoke the product (either crack, or meth) via their pipes. His fiends are so addicted to his drugs that even John Stockton, the NBA's all-time leader in assists, could not assist in them becoming sober.

Here the Jigga man  is saying he is as great/psycho as all the best Michaels in history and he's inviting you to choose between them; Michael Myers, Michael Jackson, Mike Tyson and Michael Jordan in Game 6 of the 1998 NBA Finals versus the Utah Jazz.

2. "She's stressin' me to fuck, like she was in a rush. We fucked in his bed, quite dangerous. I'm in his ass while he playin' 'gainst the Utah Jazz."-  Notorious B.I.G., I Got A Story To Tell

Biggie is about to have sex with an NBA player's girlfriend. She's in a rush to do it, so he decides to throw caution to the wind and have sex with her on the poor bastard's bed while he's away playing against the Utah Jazz.

1. "If you block the cash, we lockin' ass, I'mma put it in your chest like a Stockton pass." - Big Daddy Kane, Platinum Plus by Big L

If you try to stop Big Daddy Kane and Big L from making money, they will literally beat your ass and/or shoot you directly in your chest like a pass from Stockton, who was famous for his accurate passing ability.

Any lyrics you think should have been included, leave 'em in the comments below.