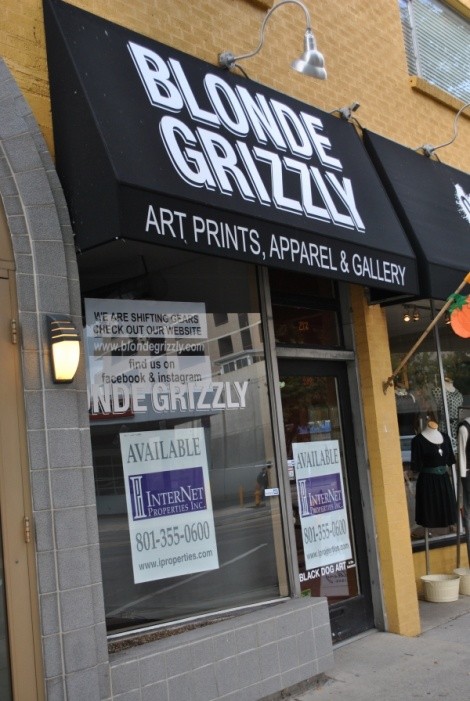 Pedestrians walking down Broadway might notice that one of the stores is looking a little empty. Salt Lake City gallery/shop Blonde Grizzly has closed its storefront on 213 E. 300 South, but the company isn't closing—you can now find the shop at ArtSpace Commons. ---

“It's still the same shop, it's just very, very small,” says co-founder Caleb Barney, who began the company with his wife, Hillary, in 2010. Barney closed the store at the end of September with little fanfare; he says their customers were shocked.

“I have gotten a lot of panicked e-mails from people who think that we've closed forever, and some people would come in while we were packing up and would get sad," Barney says. "We did this kind of under the radar. I didn't really want to do a big 'Oh, we're closing, you should feel sorry for us' kind of thing.”

Barney attributed most of the moving decision to cost -- the new space's expenses will amount to around a tenth of running the old one. The new ArtSpace location (423 W. 800 South) will also have limited hours and will be open to the public only on Fridays and Saturdays. But customers will have more offered to them through upcoming changes and improvements to the Blonde Grizzly online store.

“It will be the same as the original store, with the T-shirts and prints and stuff, but I'm going to concentrate on getting new shirts made by local, professional artists that are exclusively through Blonde Grizzly, and also doing a featured artist every month," Barney says. "We'll still have a lot of the same stuff, and if everything goes right, there'll be new T-shirts from artists all over the place that will be very special.”