In watching the local comedy scene grow, we're seeing a trend in Utah of women comedians on the rise and the impact they're having on the market. --- Statistically, men tend to run the gamut of most stand-up scenes, even in Utah, especially with the open-mic nights and major touring comedians. But in the past two years, Utah has started seeing an increase in women who can hold their own at the mic, and proving they're just as funny, if not funnier, as the men currently getting top billing. One of more recent rising names is Rachel Jensen, whom I'll be chatting with today about her career in stand-up so far and her thoughts on the local comedy scene in Utah. (All pictures courtesy of Jensen.)

Gavin: Hey, Rachel. First off, tell us a little bit about yourself.

Rachel: I'm a writer, a film nerd, an Internet time-waster, and I like to get up onstage and make people laugh. I kind of have a thing for leather pants and big boots. I've been called "the girl next door -- if you live next to a Hot Topic, "a "ballerina with brass-knuckles" and will also answer to "Hey, you! Get out of the bar." I love your mom jokes and tequila, though not at the same time, as I've learned a hard lesson with that one.

Rachel: I had a long background in performing, doing theater growing up, then joining a few rock bands, so I've always had a love for the stage. Stand-up comedy has always been an art form that I loved and admired, and it took me almost 10 years to get up the guts to finally try it out. I tend to like darker comedy, social commentary, and thought-provoking artists. I grew up loving the styles of Madeline Khan, Cloris Leachmen, and watched every old SNL rerun I could find. My favorite comedians would have to be Eddie Izzard and Christopher Titus -- in fact, my family's Thanksgiving tradition includes wine and the watching of Norman Rockwell Is Bleeding, sometimes crying ... but let's not get into that.

Rachel: To be honest, I had been toying with the idea seriously for about a year before I tried. I came up with sets, wrote them down, but always backed out. I finally had a weekday off work and a few co-conspirators who came with me, loaded me up with some courage beer, and I was addicted; it was really a group effort. From that point on, it's been about improvement and gaining ground in the scene. Anyone can start out with this because it's fun. Turning it from a hobby into a passion and then into a career just takes tenacity.

Rachel: It's always rough starting out. You have to make connections and get out onto the circuit first, but early on, I noticed how many comedians were willing to help out, give feedback and notes and invite me to join a few of their gigs. We've got a really great group in this town that will extend a hand to newcomers and really help you get your name out there. Starting out with open mic nights moved into bigger things pretty quick!

Rachel: Don't fight with your audience, don't get too drunk and always try to have fun. You win some and you lose some, and, unfortunately, those first few losses hit really hard. But, if you try to figure out your crowd and make notes of what works and what doesn't, it transforms from simply telling jokes and hoping that a few people laugh to really dragging your audience along into your neurosis, which is way more fun.

Gavin: What's it like for you personally coming up with material and deciding what works and what doesn't?

Rachel: It's not as easy as comedians make it look, really. It takes blood, sweat, tears, lots more tears, sometimes in the fetal position. Sometimes I'll really love a joke that is just not getting any kind of reaction, and I'll ask myself why. It might be the audience, it might be my timing, and realistically, it might just kind of suck. Doing sets in front of different crowds really helps you get a feel for your material and your delivery. It's an ongoing journey. At the end of the day, if I really enjoy it, and if my audience is into it, I decide that I'll keep it around.

Rachel: We're like family more than co-workers. We have moments where we bond and join together to do amazing things. We also have moments of in-fighting and jealousy -- you know, who's getting more gigs, or who's getting too big for their own ego. Really, the local comedians here are some of the most amazing people I've ever met; we have a blast together. Friends help friends out, and we get each other involved in things frequently. If one of us can make it and become successful, it's a win for the whole scene here.

Gavin: What has it been like for you, just starting out and learning the ropes of the comedy scene in Utah?

Rachel: Utah has its own idiosyncrasies. For instance, there are all-ages shows, and family shows that you have to watch your P's and Q's -- or rather, your F's and A's. There are so many different venues here with their own rules and social norms; you have to find your own voice, and then make sure you're also flexible for the many crowds here. Again, it's really an awesome group of people to be involved with, and I wouldn't have been able to get as far as I've come without the help of the other comedians.

Gavin: A lot of your gigs are on the underground circuit. What's it been like for you performing for those audiences and really trimming your set for more appeal?

Rachel: Underground sets get away with a little bit more. Sometimes the shows can get pretty interesting and horrible things are done with puppets. Open-mic nights are crazy fun, and we use them as playgrounds to try out new stuff. As far as trimming goes, I think it's more about learning how to have fun with the set you're working on; at that point, the appeal is there and you can take it anywhere.

Rachel: The bad: We need more places to perform, more nights, more variety. Most of us do have other jobs, and so the nights we get out regularly are hit-or-miss. We've lost a few of my favorite open-mic venues, which was really sad -- imagine me pouring a 40 right now -- and so we're trying to do the best we can with fewer outlets. It seems that people are either unaware or unwilling to get out there and support the local scene; maybe they don't know where or when, or the times just don't work. The good: We've got awesome talent here, and tons of variety. We have great prop comics, improv groups, songwriters, shock comics and sketch writers. Seriously, there is something for everybody, and the more you go, the funnier it gets. It's amazing to see comics break out and really become great at what they do. You start local and you get to see the next comedy greats from the very beginning.

Rachel: Get people out there. If you like comedy, go to an open-mic night. They don't cost much -- some are free; does FREE catch your attention? -- they have awesome people, and if all else fails, usually a bar. Grab your friends, your significant other, your not-so-significant other, your grandma, anyone, and just get out there to see what SLC has to offer! 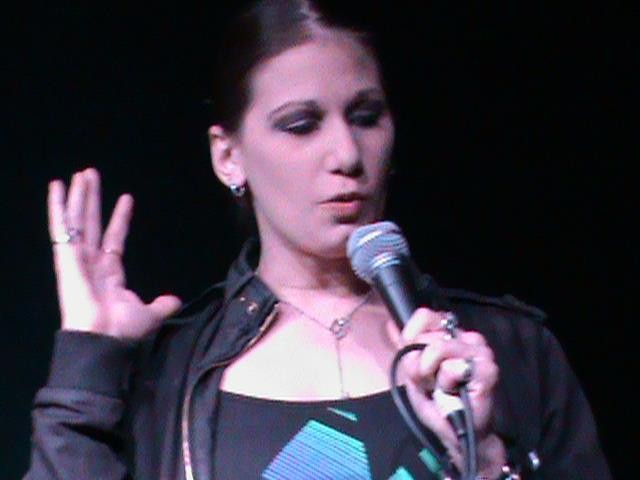 Rachel: Aw, man, I can't play favorites, but we've got some amazing acts to see in this town. Melissa Merlot always finds the funnest shows to do both as a host and a featured comic. I've gotta give a shout-out to Patrick Ramirez and newcomer Nick Smith because they both always have me busting up. One of my absolute on-going favorite shows in town, whether I'm in it or just checking it out, is the set list show by Andy Farnsworth called "Someone Else's Baby." Also, check out some talented people in Joker's Gone Wild, a monthly show for those up North of SLC; it's always at an awesome venue and always funny.

Rachel: As I said before, we need more! The venues are always so hospitable to the comedians. The reality is, they can't do it on their own. Any venue that hosts comedy shows needs word of mouth and audience members every week bringing their friends and having fun to keep us around.

Rachel: Anything that gets people out and enjoying comedy is a good thing. We get some amazing national, traveling comedians who then in turn use local comedians as opening acts. It's great exposure and it's a real learning experience to work with someone who's made it to more of a commercial level and take notes. We have a huge comedy following in town, and these shows are a blast to go to.

Rachel: At this point, I'll be out every week at open-mic nights and making random appearances. My major goal for the rest of the year is to have a returning role on COPS. Fingers crossed!

Rachel: I really would love to get more exposure for the local scene at its very roots. So, get out there to open-mic nights on the town. Come see me nearly every week at Comedy Roadkill at the Complex, Tuesday nights at 8 p.m., no cover to get in. For those interested, they can sign up to perform starting at 7:30 p.m. Check out SLC Comedy Scene on Facebook to watch for upcoming shows, and you can follow me on Twitter.