Hello to all you body-checking, gift-snatching, toy-destroying, plasma-carrying, guard-shoving, Black-Friday morons ... er, I mean, enthusiasts! --- With any luck, many of you have stopped trying to kill each other over the 80% off deals on items marked up way beyond what they would cost even if made in America, and have started plunking money into the local economy with Utah businesses over the weekend. But then, we can only hope. In lieu of a 337 update, here's something random from downtown Salt Lake City:

Getting into events, first up on Sunday will be the holiday edition of Craft Sabbath! In fact, it's the first of two in the annual tradition of having the first two Sundays of the month dedicated to the monthly bazaar. Held in the promenade of the Salt Lake City Main Library, you can check out dozens of crafters, from 1-5 p.m., offering you locally made products as potential gift ideas. If you can't make it tomorrow, the next one happens Dec. 8. 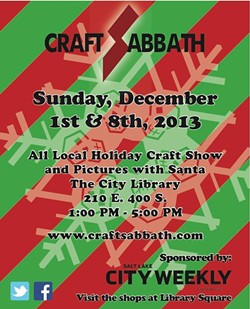 Next up on Tuesday, we'll see the RAWards come to The Complex, as it holds the semifinal rounds. Let me be clear: This is not really a localized event, as it is actually a national competition held in cities all across the nation. Salt Lake City just happens to be one of the major hotspots, where local designers, makeup artists, hairstylists and more are on display to be crowned the best our city has to offer. Tickets run $17-$20, depending on when you get them, and it is cocktail attire, but if you're into local fashion then this is a can't-miss event, as you'll be seeing many rising starts and established talent compete for national recognition.

On Friday, aside from the final Gallery Stroll of the year (more next week), the producers of local independent film Hellskate will be hosting a fundraiser to help get the film ready for release. The group will be taking over Alleged, where artists, musicians and various other local talent will be on hand to support and help pass out items out for auction. If you love roller derby and/or horror, this is one you need to check out and help fund.

Next Saturday will be the start of the Holiday Market. From the summer warmth and green grass of Pioneer Park (suspiciously vacant of all homeless people), the Downtown Alliance moves indoors to the Rio Grande just a block away to help you get locally made produce and products in season, rather than having to wade through national food chains for certain items. The two markets for this month will be Dec.7 and 21; visit them online for more details.

Starting on Monday, Dec. 9, Velour will bring you its Winter 2013 Battle Of The Bands. The six-day event will present four bands every weekday night for you the audience to check out and vote on. The winner of each night will then play in the finals, happening Dec. 14 where they'll be judged by fans, a select panel of knowledgeable music lovers (including myself) and the Velour staff. If you've ever wanted to see what's coming down the pike in local music out of Utah County and surrounding areas, this is your best bet.

In Weber County, the Indie Ogden Awards will be happening Dec. 12. From the namesake website that's been blogging about Ogden-everything the past few years, selected businesses and people from Ogden are competing for awards to highlight them as the best in the area. Voting is all but completed at this point, but you can attend the awards gala and celebrate Ogden to its fullest this evening at Union Station.

And then, in two weeks, the People's Market will hold its Seventh-Annual Holiday Market -- much in the vein of the regular markets the group holds throughout the spring and summer, but with more of an emphasis on local materials for the winter season and possible holiday gifts, in the warmth of the atrium of Trolley Square (right outside Weller Book Works). And if you can't make it, a second one will be held Dec. 21, as well, just before you're almost out of luck shopping around.

As for the blog: I'll be looking at some of the final performances in theater and dance, the last Gallery Stroll of the year, checking out a local stand-up comedian and a geek-related blog. At least, that's the plan; as always, we'll see what happens.