As noted earlier this month, the Utah County music scene continues to thrive, and with it come more opportunities for musicians to put out great albums and expand their part of it all. --- One of the studios helping crank out the local music is Audio West, located on the north end of Provo, with one of the fanciest studios you'll find in the entire state. Not only have local bands been hammering out tunes within the studio's walls, national musicians also have started taking notice and making the Utah studio a quiet retreat to record material without anyone looking over their shoulders.

Today, I chat with founder and owner David Devaney about the formation of Audio West, the impact the studio has had locally, thoughts on the local music scene and a few other topics. (All photos courtesy of Audio West.)

Gavin: Hey, David. First thing, tell us a bit about yourself.

David: I was born and raised in Los Angeles California as one of six children. I always had a love for music, even at a young age. The inspiration came from my father, who played several instrumentals and was also a drum major in college. Later in life, he worked for a record company in which I got to meet several well-known artists and musicians. In high school, I was in several bands, would teach at a dance studio at night and I would DJ on the weekends. Needless to say, my life was consumed by music. After high school, I attended the Musicians Institute in Hollywood and graduated from the Recording Institute Of Technology. After a brief internship in a local studio, I began work as a recording engineer and producer. After t10years of work in the industry, I made the move to Utah and started up my own recording studio and small independent record label, Audio West.

David: One of my favorite artists to watch growing up was the King Of Pop, Michael Jackson. I used to rent his Thriller VHS from the library almost every week. I would practice in the mirror, trying to mimic his dance moves, and performed at several school functions as an impersonator; later in life, artists like John Legend, Justin Timberlake, Incubus, Sublime and a new-found love for The Beatles.

David: I originally came to Utah in 2007 to work on a project producing music for a TV show, and only expected to be here for the summer. When I was here, I realized how much of a music scene Utah had and felt like something big was on the verge on happening here because the talent was abundant. After going back and forth for several years, working with clients as a freelance engineer renting time at whatever studio had availabilities, I finally decided to make the move and set up my own studio and plant my roots in Provo under the name Audio West. I wanted a simple name that was easy to spell and remember, but also had some meaning. Since a studio works on various things that are more than just music, I decided to use the word "Audio." Then, being from California, I added on "West" to represent my past and where I come from, and what mentality I was bringing to the state of Utah.

Gavin: How did you come across the location in North Provo, and what made you decide to set up shop there?

David: When I decided that the move to Utah was on the horizon, I began scouting locations, and contacted several well-connected people in Utah and asked them for their help in finding the right location. I had been in the building several years prior when it was run by a film company and fell in love with the setup. When one of my friends mentioned that the space had become available, I rushed over and checked it out and felt like I had found my home. Besides being in a nice building with great security and a close location to Utah Valley University and Brigham Young University, the custom soundproofing and pre-installed wiring saved hundreds of thousands of dollars, which gave me the flexibility to put that money into equipment, marketing and minor renovations,

Gavin: How did you go about getting all the equipment and instruments you needed, and what was it like setting it up?

David: Some of the equipment and instruments I had previously owned from past years of working in the industry and collecting things along the way, but a big portion of what's in the studio today has been funded by the studio itself. I started small with just the bare essentials of what I needed to start taking clients, and any profit that came into the studio for the first year went right back out to upgrade existing gear, buying new mics or adding on to our instrument and software suite. Slowly, we began to grow and take on bigger projects and offer various types of services and begin to compete with some of the bigger-name studios around. 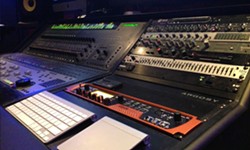 Gavin: Tech-wise, what kind of audio and recording equipment do you have?

David: Our recording console is the Digidesign Control 24 running into a Audiofire12 audio interface, which connects to a Mac computer running Pro Tools software. We record with several mics including the Nuemann u67, Shure Sm81, Shure sm57, AKG D112, audix d6, Sennheiser 421 and more. Software-wise, we use several Waves bundles, Omnisphere, Autotune, Melodyne, Steven Slate drums, as well as several others. We have an in-house drum kit, upright piano, acoustic and electric guitar, bass and keyboard. As far as outboard gear, we have a dbx 160x compressor, Symetrix 528-channel strip-voice processor, 11 rack guitar FX, and an emulation rack coming out of some KRK 8 monitors. We use the HearBack Hub for headphone monitoring.

Gavin: What was it like for you during the first few months of running the place, and what was the reaction to the studio from local musicians?

David: The reaction was amazing the first few months; I couldn't have been more happy with the results. We offered some new services that some other studios were lacking, such as not only recording opportunities for bands and musicians, but also production for pop, hip-hop and R&B singers. We also gave very competitive rates, which starving artists loved. 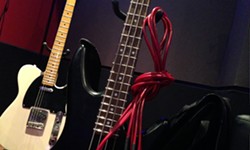 Gavin: To date, who have you worked with locally to produce albums, and what are some of the more familiar titles to come out of the studio?

David: Locally, as far as recording goes, we have worked with artists like Alex Boye, Amy Whitcomb, Ryan Inness, Allred, The Jets, David Archuletta, The New Electric Sound, Luna Lune, as well as several contestants from American Idol, The Voice, X-Factor and America's Got Talent. We have also been involved with events, playing with and running live sound for artists who have been in our studio, like Neon Trees, Fictionist, Lindsey Sterling, Jordan Sparks and Imagine Dragons.

Gavin: You've also worked with a lot of people outside of Utah. How has it been expanding the business and helping record and produce music on a national level?

David: With technology these days, it is amazing the kind of productions we can do with people all over the world when we utilize things like Skype, e-mail, Dropbox and UStream; you can truly set up your business anywhere and be able to connect in ways never thought of before.

Gavin: For those interested in recording at the studio, what other services are available for musicians to take advantage of?

David: We offer a wide range of services, from voice-over work, radio ads and jingles to recording and production in rock, pop, hip-hop, R&B, country and spiritual. We also offer songwriters and musicians if you need help piecing together a song idea and tracking all the instruments for you, if needed.

David: For now, we are comfortable with the setup we have, but expansion is always an idea in the back of my head. If an opportunity presents itself that allows more space, or a second location and it makes sense, then I would strongly consider it.

David: I think the music scene in Utah is striving and there are a lot of great up-and-coming bands to look out for. However, I would caution many of them to not try and be like someone else. They see success from other locals bands and try to copy them and recreate the magic, but the true magic is in the originality and spontaneity of it all.

David: I think in the last few years, there have been several artists who have helped put Utah on the map as a legit contender in the music scene. As long as we show them that it wasn't just an accident and that there are plenty more ready to take the big stage, then we can solidify our spot as one of the music hubs, like Nashville, Los Angeles and New York.

David: I think some of the local labels are great if they have the right intentions. We have a small label at the studio that focuses on finding amazing talent who don't have the necessary resources or funding to record and we help them out to try and keep the music scene alive and thriving. We then we split a portion of the profits from sales to help keep the label going so we can help the next act. Some labels only concern is money and the music comes secondary, which hinders the creative process and greed takes control instead of talent.

David: I think Utah has a great range of studios to record in, but just like I came in and created my space in the market, I welcome anyone else to do so, as well. However, I think what is more in need is places for bands and musicians to meet and practice and rehearse in a professional and creative environment instead of a garage or basement of a house.

David: Unfortunately, in the modern age of iPods and streaming services, the radio is not as important as it once was. But any tool that a local artist has to get their music out there helps, and if local radio stations continue to play local music, the bands will do their part to help promote and keep radio alive.

Gavin: What can we expect from both yourself and Audio West over the next year?

David: We are now entering our third year here in Utah. The first two were getting the business up and running, building a strong staff and make a splash on the local scene. The next year is when we will try to reach new heights and put our efforts into launching our local artists to the national stage and once again bringing attention from the world to Utah.

David: Anyone who has an interest in recording, or taking a tour of the studio and learning more about the industry, please visit our website and contact us.