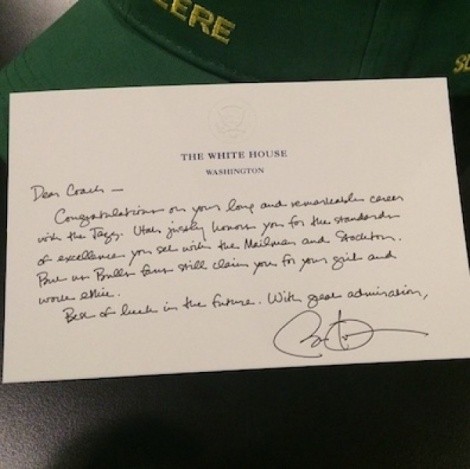 The Jazz are honoring former coach Jerry Sloan tonight with a banner-hanging ceremony, and even the leader of the free world is getting in on the action.---

The Jazz Facebook account posted a photo of an apparently handwritten card from President (and notorious Bulls fan) Barack Obama to Sloan next to a green John Deere hat (no indication if that was a gift from Obama or simply a photo prop). The text reads:

Dear Coach,
Congratulations on your long and remarkable career with the Jazz. Utah justly honors you for the standards of excellence you set with the Mailman and Stockton. But us Bulls fans still claim you for your grit and work ethic.
Best of luck in the future. With great admiration,
Barack Obama

Sloan spent 23 seasons with the Jazz—that's the longest tenure by any coach in any major sport—before unexpectedly resigning in February 2011, which I wrote about with much hand-wringing. I bemoaned that Sloan wouldn't be getting a sendoff full of fanfare, which he would (and will) probably hate but that saps like me will eat up. It looks like I'll be getting my way tonight, three years later—though my parents have since given up their season tickets and thus I won't be there to see all the action (I assume Obama also has to miss it).

Of course, this being Facebook, and this being Utah, people are upset about Obama's note. Many of the comments below the picture follow this theme:

If Obama was half the person Sloan is, this country would be much better off

Nice note…. somehow I doubt Sloan is an Obama fan though.

Complements from your true fans, trash from Obama.

Doesn't he have better things to do?

And the grammar assholes also came out of the woodwork, finding one of the least-observed rules in the English language to complain about:

"Us fans" should be "We fans." This is the POTUS for crying out loud.

Us Bulls fans? How many English classes did he sleep through in school?