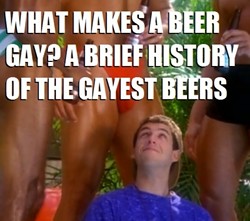 Ever since SNL's "Schmidt's Gay," beer enthusiast have long thirsted for a truly gay beer, one that is totally gay and not just curiously hoppy. Well, Wasatch Brewery, the same folks who brought us the clever Polygamy Porter and Provo Girl Pilsner, have finally developed a brew in response to Utah's issues surrounding sex marriage, called Live and Let Live. The question is, is it really that gay?---

According to a press release from Wasatch brewer Dan Burick, “Live and Let Live is a blond pale ale built with two beautiful malts and two wonderful hops, all fermented with a pair of yeasts." So, basically, what makes this beer unique and, I guess, sort of "gay," is the fact that it unnecessarily uses two yeasts. That's right, two yeasts ... at the same time. 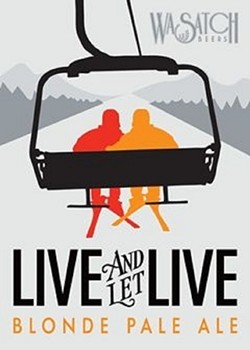 “This pairing of similar ingredients is a first for Utah and we think it's way overdue,” continues Burick.

This is indeed correct; Live and Let Live is the first "queer beer" in Utah, and I suppose a delicious gay beer is long overdue. However, let us ignore the obvious question of, "do we really need a gay beer?" and just jump to the extremely pressing inquiry of, "what makes a gay beer ... well, gay?"

Since there's clearly no such thing as a gay palette, a gay beer is all about marketing and intention. On the surface, the 4 percent alcohol by volume Live and Let Live seems somewhat gay. The label features two sexless shapes of skier people and, as mentioned before, the beer features two of the same ingredients living together in the same bottle. So far, it's kind of gay.

As for intentions, the aim of Live and Let Live comes across as a bit watery. Wasatch Brewery is making a topical brew out of Utah's gay-marriage situation and clearly has good intentions with this beer, but the press release is just packed with goofy gay jokes and doesn't take a meaningful stance on supporting same-sex marriage: "Schirf points out that his brewery has been a practitioner of civil unions for years. 'In 2000, we entered into a partnership with another brewery much like ours,' he says with a smile, referencing a partnership with Squatters Craft Beers. 'Our Utah Brewers Cooperative is still happily ‘married’ today." Uuurgh, Great. Good one.

Clearly, what Utah's first gay beer needs is some historical context. So in order to find out how gay this beer really is and if gay beers ever go over well with the general public, let's take a look at the gay beers that have proceeded Wasatch Brewery's Live and Let Live:

What makes this beer gay? This is one of the weirder so-called gay beers. Brewed in 2011 for the Prague Pride festival, the beer was actually crafted by Ladislav Jakl, who is the secretary and political office director to Czech President Václav Klaus, a renowned homophobe.

How was it received? Though the beer has a "pink color and sweet taste," it experienced a lukewarm reception. Critics have questioned the motives behind the beer and have criticized it as more of a mockery than a celebration of Czech's LGBTQ community.

Salamandra and Purple Hand by Minerva Brewing in Mexico City 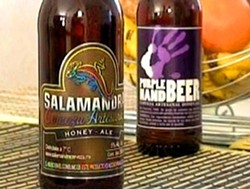 What makes this beer gay? In 2011, Minerva Brewing released two artisanal honey beers, Salamandra and Purple Hand, and claimed to be the first brewery in the world to create a line of beers specifically for the LGBT community. The beers are reportedly named after iconic names and symbols of the LGBTQ community. Purple Hand is a nod to the the Gay Liberation Front and the famous Society for Individual Rights protests in 1969 to disparaging articles from the San Francisco Examiner. As for the Salamandra (Salamander), your guess is as good as mine.

How was it received? The two beers were met with mixed reviews. Though they sold fairly well in the beginning, the beers were criticized as patronizing to the LGBTQ community.

What makes this beer gay? Hillcrest Brewery claims to be the first LGBTQ brewery, and its only gay-specific beer, Pride 13 XPA, debuted for San Diego's Gay Pride Festival in 2013. The beer was launched as a limited-edition commemorative beer to celebrate the historic Stonewall Inn Uprising and the Prop 8 Ruling, which makes it pretty gay.

How was it received? The beer was released at only two locations and for two months. But since Prop 8 was deemed unconstitutional, you could say the beer went over pretty well.

Hello My Name is Vladimir by BrewDog Brewery, Scotland

Ingredients: A double IPA with a touch of Limonnik Berries.

What makes this beer gay? Scottish brewery BrewDog whipped up this "not for gays" limited-edition batch right before the 2014 Olympics in Sochi as a "tongue in cheek" protest against the Russian leader's anti-gay laws. The best thing about it? A case was sent to Vladimir himself, and according to BrewDog co-founder James Watt, 50 percent of the proceeds are going to organizations that support suppressed minorities.

How was it received? Because of its relentless jabs at Mr. Putin, the beer made international headlines and sold out almost immediately. People love making fun of Putin.