As we continue to see the stand-up scene in Utah thrive, more local names are coming out of the woodwork to bring a little bit of joy to your evenings. --- What's even more impressive is watching that scene support itself by encouraging newer talent to try harder and push themselves to greater heights, whether it be on the big stage of Wiseguys or the open mic night at one of the local bars that have opened their doors to the wave of talent. Today we chat with John Forbyn about his time coming up through the local circuit, thoughts on Utah's comedy scene and a few other topics. (All pictures courtesy of Forbyn.)

Gavin: Hey John, first off, tell us a little bit about yourself.

John: I’m definitely a product of Utah, and yet I’ve never quite fit in because I am a pretentious bastard in the literal senses of those words. I was an only child with two single mothers and I got used to a lot of attention, privacy and conversation with adults. I moved a lot and didn’t really have cool older siblings to introduce me to comedy, music, etc., but my mum has good taste in comedy and made sure I got hold of things like Steve Martin and Monty Python. For a long time, I really identified as a liberal Mormon and wanted to use satire to fix all the things I disagreed with in the church I was determined to stick with. I did an LDS mission in Switzerland, France and Luxembourg and film school at BYU, where I taught Intro to Film labs and mostly studied screenwriting. Those years afforded me a lot of character definition and inspiration, but I had an increasingly harder time being creative, as I felt so censored, you know? My sense of humor – and my values in general – felt like the fleas in the jar who don’t realize that the lid is off and they could jump out. Now I’m settling into uncensored life, and it’s no surprise that my comedic voice is sounding more natural. I also met the right person, who happens to be a lovely and hilarious woman, and we’re gearing up to move to New York City as soon as she finishes up at the University of Utah. The idea is to take classes at the Upright Citizens Brigade training center, meet people with similar project interests and do whatever it takes to make a career out of comedy.

John: My friend permanently stashed his CD copy of Monty Python: The Final Rip-Off and that was a revelation to me. Then Mike Myers, Kids In The Hall, Christopher Guest, Homestar Runner, Adult Swim, Ricky Gervais, Edgar Wright, and an increasingly absurd lineup of disproportionately English, Scottish and Irish offerings all flowed in thanks to BBC DVDs at the OPL (Orem Public Library), BYU HBLL, other acronyms and Netflix. I was fascinated by the Monty Python guys, and the lifestyle of comedy writers in general: typically well-educated people with talents that could make them a more lucrative, or at least more secure living, but who obsessively commit themselves to putting silly peanut butter on the celery of truth. And to work with peanut butter all day! Mmmmm...

John: I remember making a list when I was 8 or so: veterinarian, inventor, or comedian. By junior high, I decided I’d have to go to film school, since it was the only thing that kind of touched on everything, like some culmination of the various media as a particularly effective way of telling stories and/or jokes. I had a weird freakout after my mission, where the Great Recession hit right as I got unwisely BYU-married, then graduated into the real world. I seriously contemplated hiding out in grad school, possibly even law school, and ended working a series of, you know, jobby jobs, as I kept adjusting the trajectory back to what I always knew I needed to do: make fun of things for the greater good. Here’s where the pretentious bastard part really comes in: I was lying on a bench across the Seine from the Notre Dame cathedral in Paris, where I had just moved to teach English and try to not go insane during the aforementioned period; I was reading The War of Art by Stephen Pressfield, and it just kicked my ass for not getting in gear creatively. His point is very idealistic, like, if you feel inspired to create something, then you have a responsibility to the world to put it out there. Not everyone can be a full-time artist, but if you can manage it, and you truly want to, it’s kinda wrong to not at least put your stuff out there for whomever might appreciate it. Certain movies and albums saved my life at times, and I hate to think where I’d be if Jeunet hadn’t made Amélie or Hornby hadn’t bothered to write High Fidelity.

John: Extremely gradual and, thus, pretty painless. I’ve been committed to practicing stand-up for about three years now, but I’ve split the time with a lot of improv, some sketch groups, a couple of bands and this graphic novel thing my wife and I are doing. Between all those things, I’ve made enough friends that the invitations have been getting momentum on their own, which is really encouraging and exciting.

John: I guess just the basic, obvious, but easy-to-forget fact that there’s no reason to be nervous; the audience wants you to do well. There’s also no reason to compare your stuff to others’ too much. Just do stuff that you like and share it with people to see if they like it.

Gavin: What's it like for you personally coming up with material and deciding what works and doesn’t?

John: It’s mostly fun, and kind of agonizing. I tend to procrastinate editing and mostly just churn out new material. The exploring is my favorite part, but I’m getting into a phase where the editing is way overdue, so I’m in the process of going back through things and selecting my favorites, then polishing them into a more memorizable set. I’m pretty methodical about noting down ideas that hit me throughout the day, so a lot of my writing comes from joking around with my wife and other friends. That, and just being open to my own weird thoughts, especially the ones which surprise even myself. Then I sit down a few times a week for deliberate sessions of sketching those notes out into presentable forms, figuring out what it is about them that tickles my brain and seeing if that leads to anything else.

John: Basically, I only do the former. I focus on getting to know and work with the people I naturally gravitate to, and otherwise avoid comparisons as much as I can. I mean, that’s impossible, but I try.

Gavin: You've been a part of the local circuit for a few years now, how has it been for you to watch it grow?

John: I’m really excited to see Utah audiences get more and more accustomed to a wider range of comedic styles. It’s great to have several clubs going and drawing their own types of crowds, so that comics get to practice with different environments.

Gavin: You don't just do the major spots in town, you also hit up the more underground clubs and comedy nights. How is it changing up audiences and how does that affect the way you approach a gig?

John: I enjoy smaller shows where I can have enough time to talk to the audience and get to know them. My favorite stand-ups take a lot of time to discover silly things in the moment, and I have the most fun when I feel like I can read a crowd’s personality and try to speak their language. 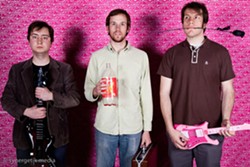 John: I love how individualistic stand-ups tend to be, but it can also make it harder to hang out together unless you really have a lot in common. Improv folks tend to be the opposite, a lot more teamwork-y and emotionally generous, which hypersensitive nerds like myself really value. I’ll probably always mix around in both communities.

John: I’ve missed my promising-comic buddy Greg Orme, and I’m looking forward to hooking back up in New York. I always look forward to the sets of people like Christian Pieper, Jackson Banks, Wallace Fetzer, and I was ecstatic when Buddy killed it opening for Tracy Morgan.

John: It's crucial, and so great of the clubs who see the mutual benefit. I think it's what makes a local culture viable. It gives the clubs and bars affordable, unique entertainment, and the comedians benefit from trying out their voices with a wider variety of audiences. I especially love it when cafes and public places host comedy nights. They're easier to hear and be heard in, and better for some comedic voices.

John: It makes the connection to the wider world and industry of comedy. It makes it real, and that’s very inspiring. Plus local comics get to steal moments and chats with these successful performers and get personalized advice. That’s hugely motivating.

Gavin: What advice do you have for people looking to get into stand-up comedy?

John: Be yourself. Figure out your voice and how you’re feeling and sounding when you are having the most fun, then bring that on stage. People, no matter how different, resonate with authenticity, and if you’re having fun, they probably are, too.

John: This is the year of preparing for NYC, so I’m getting a few sketches actually produced and getting a writing portfolio together, in addition to getting a feature-length stand-up set polished enough to do a demo album.

John: My Twitter’s not bad. JohnForbyn.com is in the works, too, and currently has at least my upcoming performance dates, a couple of videos and some drawings.