The band showcase at The Complex on Friday night was a powerful wrap-up to the 2014 CWMAs. With a lineup that featured Drew Danburry, Mideau, The Hollering Pines, Polytype and The Circulars, the evening was filled with a diverse selection of music as well as a few fun surprises. ---

Singer-songwriter Drew Danburry (pictured above) is becoming well-known as one of the most generous and humble musicians in the scene. That was especially true during his set at the showcase, when he featured a guest musician or vocalist on every song, just as he does on 70 Love Songs, the new album he recently released through his For All the Girls side project. He doesn’t play very many live shows, but this is the second performance of his I’ve seen where instead of taking the spotlight, he stands off to the side to share the glory with his fellow musicians. 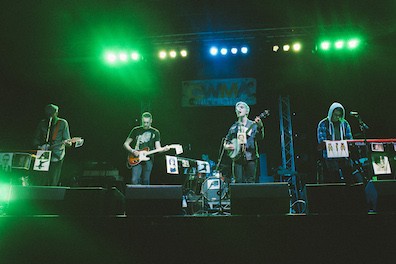 In reference to the new album, which is dedicated to various women in his life, Danburry decorated the stage with about 100 photographs, taped to microphones, his keyboards and his backing band’s instruments, which gave his set a sense of a loose narrative. The sound of the music was just as eclectic as the about 10 guests that took the stage one after the other, ranging from electro-driven pop and indie-rock. Such a feat could’ve easily gone awry, but Danburry pulled it off quite well, with additions of new instruments such as banjo and trombone getting integrated smoothly.

The featured guests were stellar, especially rapper Atheist on “Whitney.” When John-Ross Boyce of The Troubles took over lead vocals on “Juanita,” his gravelly voice combined with the horns and clacking percussion gave the song a satisfyingly dark Tom Waits feel. Danburry’s stage presence was excellent, as his belted out his lyrics and cracked jokes between songs. He even surprised the audience by throwing inflated plastic balls for people to kick around. It was definitely the most visual set of the night.

Next up was Mideau. I’ve listened to Mideau’s recorded material, but seeing them live is a must so you can watch lead vocalist Libbie Linton in person. In addition to having a lovely voice as well as complete control over it, Libbie gesticulates a lot as she sings, and the movements and facial expressions really stand out, adding emotional depth to the lyrics. And while Linton may have started out singing very quietly, she really hit her stride toward the middle of performance, vocalizing powerfully as well as perfectly in key. 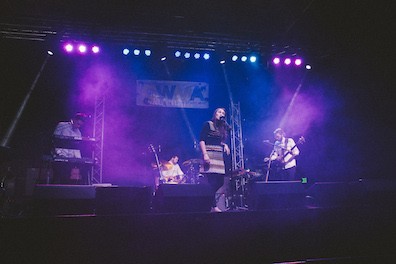 The combination of beautiful synths and delicate guitar was utterly lush, as well the harmonies by Spencer Harrison and the other energetic members of the band. In fact, one of the most inspiring moments of the set was toward the end, when the entire group sang together a cappella as flawlessly as a small choir. The song “Benny” was especially awesome, with its fantastic buildup and finale.

The Hollering Pines were incredible, with the vocal harmonies between sisters Marie Bradshaw and Kiki Buehner taking center stage, literally and sonically. The twangy country instrumentation was a nice change from the indie-rock, electro and pop that the evening mostly consisted of, with guitar and percussion blending warmly with pedal steel and fiddle.

The band mostly drew from their amazing debut album, Long Nights, Short Lives & Spilled Chances, songs such as “Don’t You Say Nothing,” “Carla Cain” and the heart-warmer “Rainy Day Woman.” A great cover of the classic “Long Black Veil” was The Hollering Pines’ most dynamically played song, with a lot of fantastic energy.

Though the crowd significantly diminished after Mideau, Polytype filled the house once more, and for good reason. Their rich soundscapes of various mic effects, watery synths, insanely intricate drumming and dreamy guitar was very fascinating, with multiple layers for the ear to grab onto. The night’s subdued audience was so enthralled, a good number of people crowded up to the rail to experience it all more closely.


Polytype’s entire set was very impressive, with fractal-like electro creating crystalline towers of sound. The coolest musical moment by far was the snappy single “Cyclone”: The beat was impossibly catchy and got the crowd dancing along.

The concluding band was The Circulars, and they showed off their ability to begin a song from a small, quiet point and slowly build it up into being. Their sound was very mellow, misty and slightly melancholy, but with a beat you could sway to, with frontman Sam Burton’s deep voice floating over it all. Every time I hear The Circulars, either live or on a recording, I’m reminded of a rainy day because of their music’s cool, liquid quality.

THE CIRCULARS // PHOTO BY ANDREW FILLMORE


The Circulars drew a lot of their set’s songs from their self-titled debut album, including the mournful “What’s to Say.” For their final song, they chose to end with a bang with ’80s-pop-influenced “Spent Our Wisdom.” It was undoubtedly The Circulars’ strongest moment, as they abandoned their stoic stances to really get into playing the music with all of their energy.

Thank you to all of the bands who participated and for everyone who came and voted! We couldn’t have created the CWMAs without you. We’re excited to announce the 2014 Band of the Year in the March 6 issue of City Weekly, so stay tuned.