Hello to all you scarf-washing, hoodie-hanging, sunglasses-wearing, smog-watching, can't-believe-this-is-what-we-get-for-weather enthusiasts! --- Yep, this month has so little happening in it, we're talking about the weather in our intro, and not the good kind you'd hear on Welcome To Night Vale either. Seems like all it took was a couple days of rain for people to whip out the shorts and sunscreen because summer is right around the corner. In lieu of a 337 Wall update, here's some random artwork from downtown SLC.

A lot of what's out there has already been covered at length in the next few weeks, so here's a few tidbits of what's to come that you should check out. The first being the Tumbleweeds Film Festival running from March 14-16, put on by the awesome people at the Utah Film Center. The fourth annual event will take over venues suck as the Rose Wagner, the City Library and the Park City Library to showcase films for kids of independent film and documentaries from around the world. You can check out the full program and snag tickets at the Center's website right now, this is a must-do for children who are into movies.

On that same night, the Connect series created by the Utah Arts Alliance returns to the Urban Arts Gallery in The Gateway. The evening allows participating artists to bring three pieces of their work for people to check out and preview up-and-coming artists. This month the special guest speakers will be the people from Signed & Numbered as they will chat with the crowd on the finer points of art framing. Go check it out from 6-9 p.m., and remember that it's totally free to attend.

On Saturday, it's time for all of us to get our Irish on. Or for me, get up and act like myself. The annual St. Patrick's Day Parade will be held again this year in downtown SLC. The route will be the same as previous years, starting up the road on 400 South by West High School, heading down into The Gateway and out the end on 200 South. This year, we're being particularly defiant, because the city apparently slammed the Hibernian Society with a $4,000 fee to run the parade after the Mayor and City Council cut funds to pay for police at parades. (Which will be very interesting to watch how the Pride Parade and the Days of '47 events are treated in a few months.) The parade is still happening rain or shine even if there are no cops, but the Society needs your help in donations (if you can spare a couple bucks). Click their website for more info, and come watch us march with... I don't know what, I don't plan City Weekly's part in it, I'll just be there.

Skipping down to March 20, the non-competitive roller derby league The Red Rockettes will be throwing their own bout between their two squads: The Cherry Bombs vs. The Black Hearts. Tickets are just $10 with the game starting at 7 p.m. over at The Derby Depot. Good night for derby if you're free on a Thursday night!

And then on March 22, the next installment of When She Speaks I Hear The Revolution will take place at Jitterbug Coffee Hop. These are incredibly passionate open mic performances from some of the best writers and activist women in the area, presenting it in spoken word, poetry, musical performance and more. And what's more, you too can take part and make your voice heard among the others who support these monthly gatherings. The event will take place at 7 p.m., be sure to arrive early and get in the list. 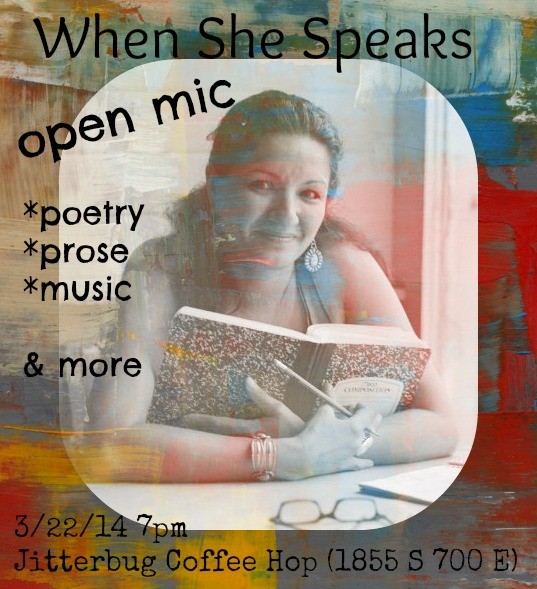 As for the blog... I'm not really sure what is on the way beyond a chat with a recording studio and a local music label, this month got quite a shakeup and things are still falling into place. Just keep checking in and see how it goes. As always, we'll see what happens.