We're closing out the month with some leftover local releases, one on the way this Sunday. --- We'll start off with a couple we forgot back in February, the first being from solo artist Jake Burch. A former member of L'anarchiste, Burch was part of the first group of people who helped get the band off the ground before lineup changes and expansion. He then went on to do his own works, the first being from June 2012 with his first solo album, War. Now, the folk musician has returned with a follow-up EP called BloodFlower, which is much more melodic and professional-sounding compared to his debut. To make it, Burch brought on the talents of local musicians Riley Parsons, Erik Maloy and Sam Johnson, but he still took on at least seven different instruments himself. You can download the EP for whatever you'd like to pay off his Bandcamp.

Keeping with the melodic, February also saw the release of a brand-new EP from The Lazy Waves. Their self-titled debut album from 2010 is still one of my favorites, plus they contributed a Christmas song to this blog, which was really sweet of them. The band's previous album, Spring Fling, came out in April 2013, but with the band living in different parts of the country, it took Michael Gross, Daniel Fischer and Matt Glass nearly a year to produce the new album, Wavetable. For a full review of Wavetable, check out last week's City Weekly, where music editor Kolbie Stonehocker gives her full opinion. You can download Wavetable for whatever you'd like to pay on Bandcamp. 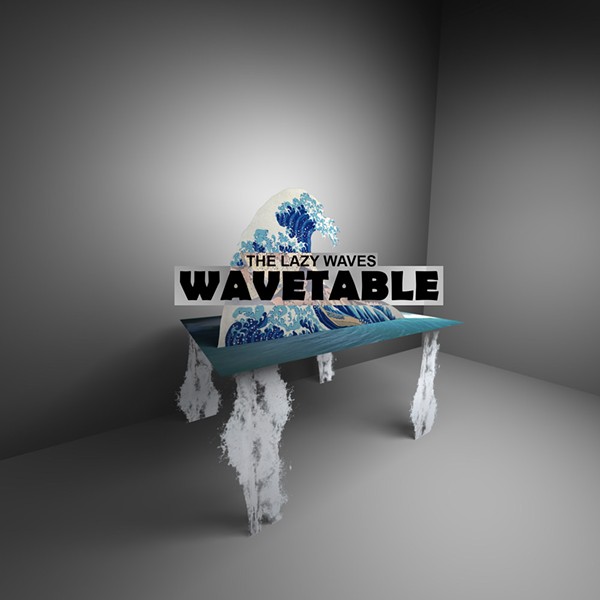 Speaking of Michael Gross, he released a new EP this month. He's been in a number of acts over the years, including The Brobecks, Let's Become Actors and his own group that recently changed their name to just The Statuettes. This new EP, Golden Hits: Volume 1, is actually a solo effort of new material recorded only by Gross. You can download it now for free off The Statuettes' Bandcamp page.

Moving into the experimental, last week we saw the release of the latest album from The Artificial Flower Company. The duo of Amadeus Davies Joestar and Shelly Mae Steele have been around for about two years now, mainly playing secret shows or at underground venues like Stale Street. This is one of those bands we don't cover in in these posts much because, being DIY artists, they have a habit of recording everything, good or bad, and posting it online, to the point where you can't tell if they're serious about their music and want to share everything they've got, or if they're just tossing everything they can at the wall to see what sticks. That method has given them eight releases of both full albums and single efforts in the length of a year. This new album, Sein-Freudian Girls Go to Chugalug House (And What They Found There), marks their ninth release in 15 months, and like much of their catalog, it's a mix of really great tracks and “what the fuck” garbage, but it's at least worth checking out. You can listen to it yourself for whatever you'd like to pay on their Bandcamp.

And finally, due to come out this Sunday is the debut album from Shadow Windhawk & The Morticians. The horror punk band (seen above, courtesy of their Facebook) is comprised of fictitious members Shadow Windhawk, Rich Misery and Trip MD, who have been belting out their brand of storytelling rock, which ranks right up there with any local heavy rock or metal bands doing the same thing in higher chords. These guys just decided to add more gore to the presentation, and it works pretty well for what they've got going. Their debut EP, Casket Spray, is officially out and you can purchase it online in various forms and price ranges through Bandcamp. No word of a release show, but damn, when they do one, it will be a show to check out.