Concert Review: Chvrches at The Depot

Chvrches is a band that in the space of a year rose from obscurity to international popularity, with tickets for their Salt Lake City show selling out two weeks beforehand. --- Like many of their fans, I was surprised that so many other people knew and liked them—but even if they’re mainstream and I’m not cool anymore, it was still amazing to be a part of the Chvrches craze on Tuesday night at The Depot.

The Range opened, which put out some deep house stuff that had the crowd shouting “This sucks!” Thankfully, Chvrches was reasonably punctual, but when the electro-pop trio came out, it was like the walking undead had arrived. Shuffling to their positions with hardly more than a wave to acknowledge they were playing in front of an audience, they jumped right on in with “We Sink,” which actually sounded way better than the recording, despite their IDGAF vibe.

Afterward, Chvrches lead singer Lauren Mayberry thanked the crowd for coming to their first-ever show in Salt Lake City, and started in on the next song, using little movement. It would’ve been weird if she weren’t so charming. She could’ve flipped everyone off and people would be like, “That’s cool.”

The band’s live sound was impressive. The vocals were pure and on-key and the beat was pulse-pumping, which made the crowd look like a sea of bobbing marmots and kept a group of drunk guys shouting “Yeaahhh!!” for the whole show. Their live stage-presence, however, was not as noteworthy, but because their music was tight, it almost didn’t matter.

At this point in the concert, no one expected Chvrches to talk at all, but they suddenly became Chatty Cathies, when Mayberry was like, “Someone told me we were on a different altitude level here and I was expecting to feel it, but I’m OK, I’m fine.” If there were a chance that someone didn’t have a crush on her already, her adorable Scottish accent obliterated all their crush defenses.

Martin Doherty, one of the keyboardists and vocalists, chimed in, saying, “Someone told me this place was haunted—does anyone know anything about this?” The crowd was like, “ What!? It is?” Some people were kind of freaked out. Nice trolling, Doherty. 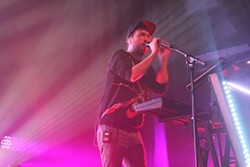 Doherty, who had more energy than both of his bandmates combined, broke out of his shell and sang “Under the Tide.” It’s hard to describe his dance moves, but imagine Gumby on cocaine— a lot of appendage flailing, which was less weird than it was entertaining.

Chvrches fake closed with “The Mother We Share,” but it wouldn’t have been surprising if they just didn’t come back out. Some people were already leaving, but then the band re-emerged and played two encore songs. Their actual last song was “By the Throat,” which was solid, but not one of their most popular. They thanked the crowd again, which actually seemed reasonably heartfelt this time, and peaced out for real.