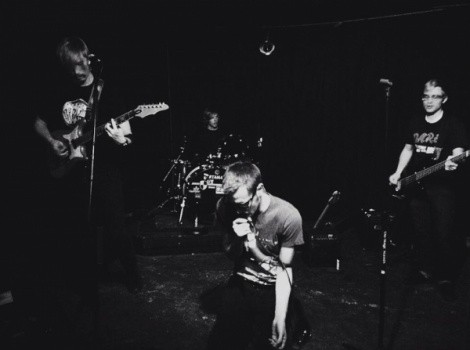 April had a lot of action going on, but now we're slowing a bit as spring winds down in May and we start to hit the summer concert season. --- Today we've got just one release show, but first some leftovers from April's online schedule. First up is DRIX, the alias of dubstep producer Dallin Ricks on the Damn Son! label who refuses to give out his name. Previously he was a founding member of Parlor Trix, and earned a name for himself being an awesome DJ, having opened for acts like Nappy Roots, Shwayze and Mod Sun. His brand new album titled Cave Dweller hit this past Tuesday and sounds pretty damn good, you can snag it for whatever price you'd like to pay on Bandcamp right now.

On that same day we got the debut EP from Wolf Nunley, an experimental pop musician who has been around for a couple of years now, but really hasn't made much of an impact on the scene. He's mainly created online releases under the name Wolfepar, but nothing to speak of in a live sense. This is his first EP under his real name called Bulma. It sounds pretty cool, with hints of 8-bit and electronica. You can snag a copy for just $2 on Bandcamp.

Continuing the online releases, we have the latest from Goodbye Nova. This is the solo project of Cedar City musician Brock Bentley, who has been cranking out music for more than six years now. He's got a rather weird habit of popping up on people's radars for a moment, and then once they notice him, he vanishes again. His latest blip on the screen is in the form of his new EP, Impressions, Vol. 2, which is essentially just three cover tracks. Honestly, his covers are not as good as his originals, but if you're down for hearing him play someone else's music, you can pre-order it (it releases May 13) for $3 on Bandcamp.

Next on the list is the latest from OK Ikumi, Karl Jorgenson's awesome project he started before creating the Hel Audio label. He's had interesting live performances, as well as an impressive discography. The last release we saw was the EP 10/13, which came out October 2013. This time around his new album titled Outside is in the form of a 7-inch vinyl record, a first for OK Ikumi and the label itself, which has remained mostly on cassette and online. You can get the album now for just $5, or the record for $7 off Hel Audio's Bandcamp.

Moving onto release shows, Saturday will have two for you to chose from, the first being up in SLC where the Better Taste Bureau will be pushing out their first full-length under the new moniker. Formerly known as Hurris & Gig, the duo transformed into a trio in 2013 and revamped their sound and pushed publicity harder than they did in their previous incarnation. Last year they put out a self-titled EP that got a lot of recognition, propelled with backing tracks from Luna Lune's Tessa Barton, now they're lining up their full-length to come out this Saturday with the hopes of capitalizing on that momentum. You can get a copy of Outliers tomorrow night at The Complex as the band plays with Luna Lune, Solarsuit and Mimi Knowles. Tickets are $10 in advance and $13 the day of, with the doors opening at 7:30 p.m.

Meanwhile down in Provo, we'll see the debut release from The Ladells. This four piece art-rock band out of Provo (seen above, courtesy of Facebook) have been a minor hit in the area since forming in 2011, going from forms of grunge to punk to noise rock in a heartbeat. They've been steadily working on their debut album, Crime, in their spare time. If the Soundcloud tracks floating about are any indication, this should be a kickass album. You can pick up a copy tonight at Muse Music Cafe on May 3 as they play with The Dilettantes and The Danger Kids. Tickets are a mere $5 with the show starting at 8 p.m.