This past Gallery Stroll was pretty cool, that is, if you weren't at the Living Traditions Festival on Friday night. In either case it was awesome to be out. --- For this month's Stroll I made my way over to The Leonardo, which took its Art Lab on the ground floor and dedicated a great portion of it to an exhibition for the works of Pat Bagley. Yes, that Pat Bagley, the Salt Lake Tribune's political cartoonist Pat Bagley, who has had a stellar career with the newspaper currently in dire times. (Which you can read about in this week's issue, but enough plugs.) The exhibition was part of their Artist-In-Residence series, featuring nearly 100 of Bagley's cartoons as well as some interactive features.

Today, in the ultimate of cross-over media writing, I chat with Bagley briefly about his career and style, the show itself and working with The Leo, as well as a few other topics, all with photos for you to check out in this gallery here.

Gavin: Hey Pat, first off, tell us a little bit about yourself.

Pat: I'm a native Utahn who grew up in California. I went on an LDS mission to Bolivia in the '70s and graduated from BYU to The Salt Lake Tribune 36 years ago. I consider myself a Mormon emeritus.

Gavin: For those unfamiliar with your career, how did you start out doing editorial cartoons?

Pat: I cut my teeth on political cartooning at the BYU newspaper, The Daily Universe. A place with so many sacred cows is a natural training ground for cartoonists.

Gavin: What eventually led to your job at the Salt Lake Tribune and becoming their resident cartoonist?

Pat: I was rejected the first time I went to interview with the Tribune. But because of office politics, somebody felt slighted that they hadn't been the one to reject me. So I was called back in and hired to spite someone.

Gavin: You've had a long career that we could go into on many levels, but to keep it simple, what's been the most rewarding experience you've done over the years?

Pat: I won the Herblock Prize a couple of years back, which was nice, and the city declared an official "Pat Bagley Day." I'd never had my own day before.

Gavin: Do you ever hear back from anyone you've drawn up or do they usually keep quiet about it?

Pat: People don't usually respond. I've heard that I am considered to be the devil in some Utah congressional offices, but Senator Hatch is gracious about being skewered and has even called to ask for the original. 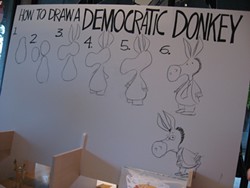 Gavin: What's the process like for you in creating a new cartoon, from concept to final piece?

Pat: It's like reinventing the wheel every day. I wake up to new stories, new information and new players in a 24-hour always-on news cycle. I have to sift through a mountain of information and select the bit I plan to work on that day. It's fine if people are entertained by my cartoons, but it's better if they are informed and persuaded to think more about the issue at hand.

Gavin: How have things been for you lately with the paper going through the changes it has and the recent developments regarding the Deseret News deal.

Pat: The hardest thing for all of us at the Trib is that our fate is out of our hands. Unless the Justice Department puts the kibosh on the deal our hedge fund-owners made with Clark Gilbert and the Deseret News, our competitor will have veto power over who buys us. That's not how the free market is supposed to work. 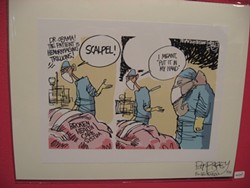 Gavin: Getting to the show, how did you become involved with The Leonardo's artist-in-residence program?

Pat: I met Jann Howarth at the Leonardo when I hosted the Association of American Editorial Cartoonists convention last year and they graciously let us use their facilities. Jann runs the art program for the Leo and we got to know each other. She's a terrific artist with a quirky sense of humor and she must have thought I could do something fun at the Leo.

Gavin: How did the idea come about for you to do a show based around your pieces from the Trib?

Pat: The cartoons from the Trib are only a small part of what I'm doing. I've made a work space for kids where they can learn the rudiments of political cartoons, there is a political cartoon I've painted on the windows that's as big as a house,  and I am creating a large mural featuring 10 notable and notorious Utahns. Trib readers got a say in who they thought should be included.

Gavin: What was it like for you in picking which ones to use for the show?

Pat: The cartoon prints on display are a mix of recent and golden oldies. Some are apparently pretty edgy, if reports of patron comments are true.

Pat: I was conscious of choosing cartoons that a moderately informed person would appreciate.

Gavin: How has it been for you working with The Leo on this project?

Pat: The Leo and its art programs are an undiscovered gem in the valley. In Jann Howarth you have a world renowned artist who is happy to work with kids to awaken their inner artistic genius. And she has a staff just as talented and dedicated. Bring the kids. It's fun, and it just might provide the spark that blazes into greatness down the road. I'm not kidding.

Pat: I will still be doing cartoons, no matter what. 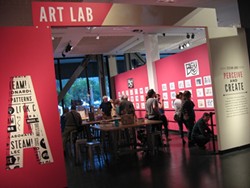 Pat: Look for a book coming out in the Fall. Welcome To Utah will have new and classic cartoons about life in the Beehive.