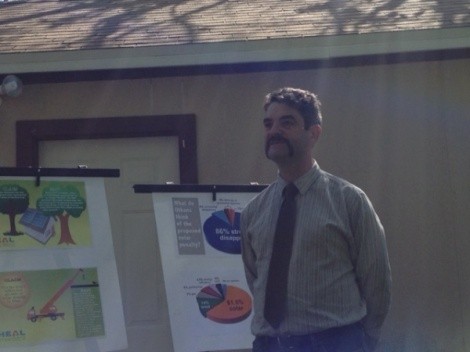 More than 2,000 solar panel owners in Utah soak up the sun's rays to power their homes and in some cases even provide extra energy back to the grid. For Rocky Mountain Power with it's heavy emphasis on coal-fired power it's a small but welcome contribution of clean energy. That's what solar panel owners thought at least until Rocky Mountain Power recently has proposed charging a $4.25 a month net metering fee onto solar users.---

For the panel people it's a perverse move for a company that supposedly is a supporter of conservation and clean energy.

“To punish people who are sending clean power to the grid is simply not fair,” says Jim French, a Salt Lake City resident and solar panel owner. “Instead of an extra charge perhaps there should be a reward for solar producers for doing their part in increasing clean energy.” French's home served as the site of a press conference for a newly formed advocacy group called the Utah Citizens Advocating Renewable Energy, or UCARE which with the help of the eco-advocates of HEAL Utah is challenging the fee increase which will be decided upon at a Public Service Commission hearing later this summer.

At issue is what's fair to be charged to solar users for “net metering” which refers to the cost of a meter that has to be installed by Rocky Mountain Power at homes with solar panels. These meters record the amount of energy used by a home and how much that use is offset by solar energy collected by the panels and that is sent back into the grid.

Mike Rossetti who started UCARE and has officially filed testimony with the Public Service Commission against Rocky Mountain Power's proposed fee says that according to his calculations the cost that solar panel owners pass onto other Rocky Mountain Power users is a fraction of what the utility is asking for in it's $4.25 rate increase.

“The Public Service Commission has to consider the costs of net-metering, which is what solar power is, against the benefits of net metering,” Rossetti says. “Rocky Mountain Power doesn't take into consideration any of those benefits, like reducing emissions, reducing wear and tear on their system or the fact that they make money from any excess solar energy—which is significant. They're picking out one little fact and distorting it.”

In Utah alone Rossetti points out Utah solar customers have eliminated 60 million pounds of carbon emissions through use of renewable energy.

In an emailed statement, Rocky Mountain Power spokesman David Eskelsen says, however, that the benefits claimed by advocates are “overstated.”

“In operating with these systems for some years now, we have enough experience to know that their main benefit is to lower the electricity use of the customers who install the technology,” Eskelsen writes. “Residential solar applications don’t really make a significant contribution to the system peak needs of customers, or displace the generation from power plants.”

He adds that the system isn't designed to efficiently collect energy from small residential sources at the ends of distribution lines. That being said Eskelsen also says that the credit solar panel owners receive for energy they collect from the sun is a “very good price for that energy.”

“The proposal does not increase company profits,” Eskelsen says. “It is part of a longstanding regulatory practice to ensure that rates for particular classes of customers cover the cost to serve them.”

But others present at the UCARE press conference challenged that notion and argued that Rocky Mountain Power's penalizing solar panel customers is just another the way company spurns renewables in favor of fossil fuels for which it is heavily invested in.

Ryan Perry with SolarTek, a local solar panel company, challenged the perception that solar panels are overly favored by government subsidies and therefore need to contribute more to utility costs.

“Rocky Mountain Power will paste [its] website with green fields and windmills but they will fail to acknowledge that they--and we as their consumers-- are effectively one of the worst polluters in the United States,” Perry said.

“They are desperate to hang onto the model that they give us all the energy, we give them money and they walk away satisfied,” Pacenza said. “Well we know the cost of that [model], the carbon buildup in our atmosphere, our children and families getting sick—and there are folks out there willing to put out their own money to be a part of the solution. So instead of punishing these folks we need to encourage them, we need to reward them.”

The Public Service Commission will consider the issue as a part of a larger discussion about Rocky Mountain Power's rate changes, with hearing happening through August. To comment on the solar panel fee proposal comments can be emailed to psc@Utah.Gov