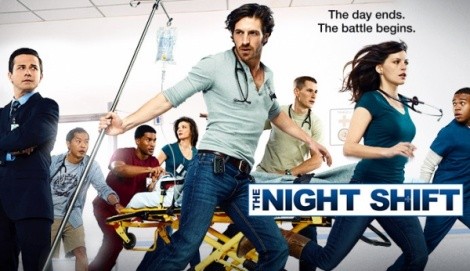 The Night Shift (NBC) Series Debut: It was too much to hope for that The Night Shift would be the long-long-overdue TV adaptation of the 1982 Henry Winkler/Michael Keaton comedy of the same name. ---Instead, it’s just another Pretty Doctors Who Barely Have Time to Bang Between Traumatic Events dramedy tossed out as summer filler until someone at NBC figures out where they misplaced those leftover episodes of The Michael J. Fox Show. Will these docs who “work hard and play harder” run afoul of their new no-nonsense boss? Will old loves/lusts be rekindled? Will anyone notice The Night Shift before it’s canceled in two weeks? Yes, yes, and Chicago Fire reruns are locked and loaded.

The Wil Wheaton Project (Syfy) Series Debut: Wil Wheaton, he of Star Trek: The Next Generation and The Big Bang Theory, hosts his own weekly geek-culture roundup—it’s like an even nerdier version of The Soup than Web Soup. But why “Project”? Is it not finished yet? Come back when it’s done, Wesley.