The final night of Velour Live Music Gallery’s Summer Battle of the Bands on Saturday night featured prime examples of the tremendous talent that’s currently emerging from Provo. --- The finalists from the showcases earlier in the week—Queenadilla, Coin in the Sea, The May Reunion, Brumby and Static Waves—went head to head that evening, but only one could walk away with the big prize: Western-rock outfit Brumby.

The large crowd wasted no time filling Velour almost to the gills as early as the first band’s set. Queenadilla began the Battle of the Bands with a rousing performance of rootsy, muscular blues-rock. Confident in their stage presence and friendly with the audience, all the band members were excellent showmen, slamming on their respective instruments and head-banging. Lead vocalist Chase McKnight said he’d lost his voice from playing their qualifying showcase the night before, but his raw throat only seemed to make his voice sound extra gritty (in a good way), even if the higher notes appeared to be difficult for him. 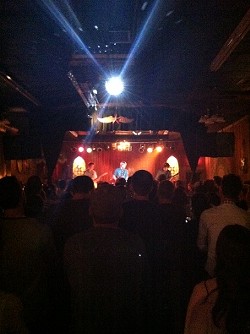 From McKnight’s wailing harmonica to the killer guitar riffs and soul-pounding drums, Queenadilla brought the power, and kept their energy up throughout the whole set—but the crowd just didn’t seem to be into it. Perhaps not yet warmed up for the night, most people only politely bobbed their heads, but Queenadilla keep on chugging. The coolest moment of their set was definitely when they had the audience stomp and clap along to a satisfyingly dark gospel-tinged song about all hell breaking loose.

Coin in the Sea

Coin in the Sea was up next, and their style of twangy folk helped the audience begin to get more amped up. With instruments including warm acoustic guitar and keyboard, Coin in the Sea’s sound was inviting and melodious, and simultaneously rich and minimal—these musicians know where to place each note just so, creating songs that never feel like they’re “too much.”

The standout element of Coin in the Sea’s set—which earned them some excited whoops from the crowd—was the harmonies between the two lead vocalists. The male and female voices complemented one another beautifully, but it wasn’t just the crystal-clear sound of the voices that was impressive, even though they were both very powerful. The way the vocalists sang seemed like they were singing in a round, with each singing different lyrics at the same time but somehow fitting them together. The process was truly fascinating.


Next came The May Reunion, who gave the most low-key performance of the night. The lullaby-like songs were made with only piano, xylophone, acoustic guitar and a little harmonica and tambourine, and were gentle and wistful. The two lead singers complemented the soothing instrumentation with equally soothing boy/girl harmonies, which were more effective when crooned instead of belted.

For The May Reunion’s relaxed stage presence, they had some funny banter with the audience that earned some genuine laughter—something about an onstage lavender-oil diffuser. The best moment of the band’s set was their closing song, the heartfelt “Rescue Me,” with the lead vocalist delicately picking on a banjo.

Brumby nearly brought the roof down with their rowdy performance, which clearly stood out from the others. In front of a banner of the band’s name floating above a cactus-filled desert, Brumby launched into their set with energy that seemed to fill the air with electricity. Huge, lonely Spaghetti Western-style guitar chords and harmonica mixed with rock sensibilities for a sound that was catchy but as haunting as the wide-open West.

Brumby’s set was definitely the most dramatic of the night. During one song, lead vocalist Oliver Tingey requested that as many house lights as possible be turned off, and that the audience hold up their cell phones, which illuminated the room like neon fireflies. The members put their whole bodies into the whole performance, but were jumping as high as they could toward the end. And for the final song, Tingey walked into the crowd with a guitarist or two, and sang surrounded on all sides by fans. Their set was a total blast. 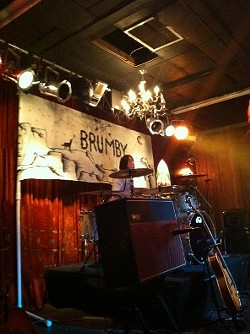 
The final performance of the night was by Static Waves, a set that ended the Battle of the Bands on an extremely energetic note. This was the act that the audience was most excited about by far, and the only band name that was chanted by the crowd. The band’s brand of pop-rock was snappy and bright, made with synths, electric guitar and driving percussion, and the audience got really into it. 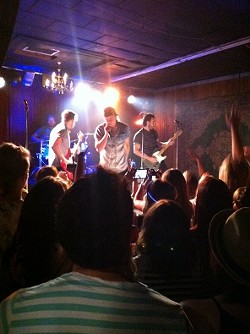 Clapping, screaming and shouting, the crowd was held rapt by Static Waves, and even continued chanting the band’s name after they ended their set and walked off the stage. 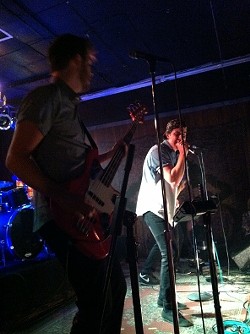 In the end though, it was Brumby that had the entire package: excellent songwriting, magnetic stage presence and an impressively executed sound. They won recording time, a cash prize, a plaque and loads of other goodies, and it’s safe to say that Utah will be hearing great things from them in the future.