At the most recent Alt Press Fest, one of the highlights for many was seeing a new run of comics from several talented people in Salt Lake City. The majority of zines are doing awesome, but nothing beats a good local comic filled with characters that live in your own neck of the woods, doing things in places you know, many designed after the people you know. One of the names that stood out from the last festival was Athena Splett, who was awesome enough to chat with us today about her artwork and comics she's been producing. (All photos and artwork courtesy of Splett.)

Gavin: Hey Athena, first thing, tell us a little bit about yourself.

Athena: Well, I suppose I'm basically your average woman in her mid-twenties who identifies more with a teenage boy than anything else. I like comics, beer, pizza, playing catch and I can still totally listen to and enjoy bad pop punk pretty frequently. 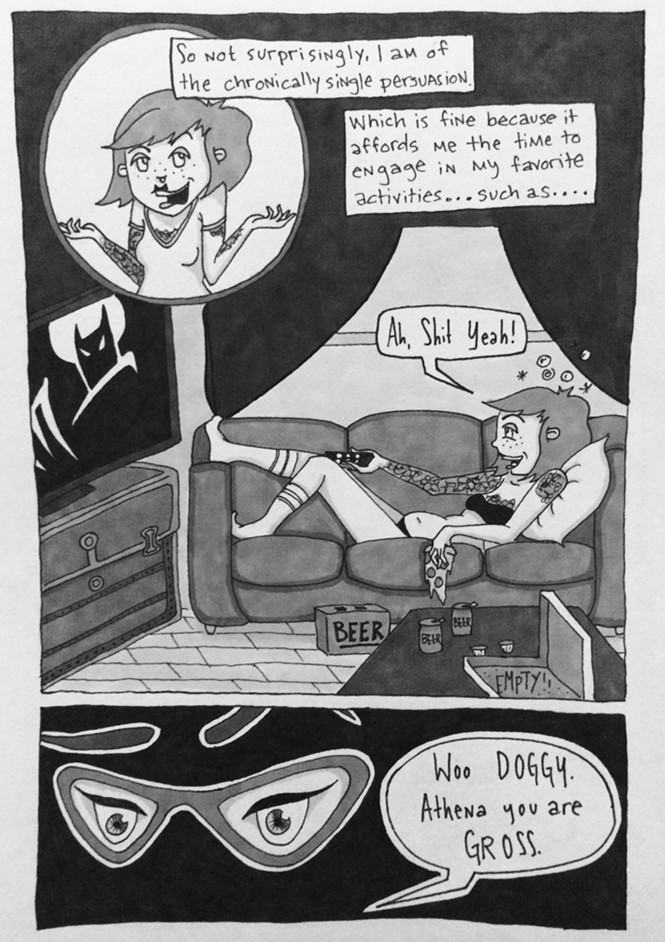 Gavin: What first got you interested in comics and what were some titles you liked reading growing up?

Athena: My first exposure to comics was probably Calvin & Hobbes as a wee tot, but the first series I ever read was Johnny The Homicidal Maniac when I was 12 or 13. It was perfect for an angst-ridden tween. I still think they're great. I also really loved Mitch Clem's online stuff (Nothing Nice To Say) as a little punk rock teenager. Then there were a few years in between where I was kind of indifferent to the whole thing, until I picked up Watchmen at 17 and it blew my fucking mind. That's when I got really into comics.

Gavin: What influenced you to start drawing them and how was it learning the style?

Athena: Not to sound like a total fangirl over Mitch Clem, but he's probably to blame. I am no fine artist, so it was cool to see something that was pretty simple in style. The more I read, the more I thought, "Shit, I can totally do this," and I drew my first strips around 14. They were terrible. Like, just god awful. I don't think I ever actively pursued a particular style. I picked things up of course, like the use of onomatopoeia, exaggerated facial expressions, etc. but I mostly just do what I can with what I've got, which so far I'm pretty happy with. 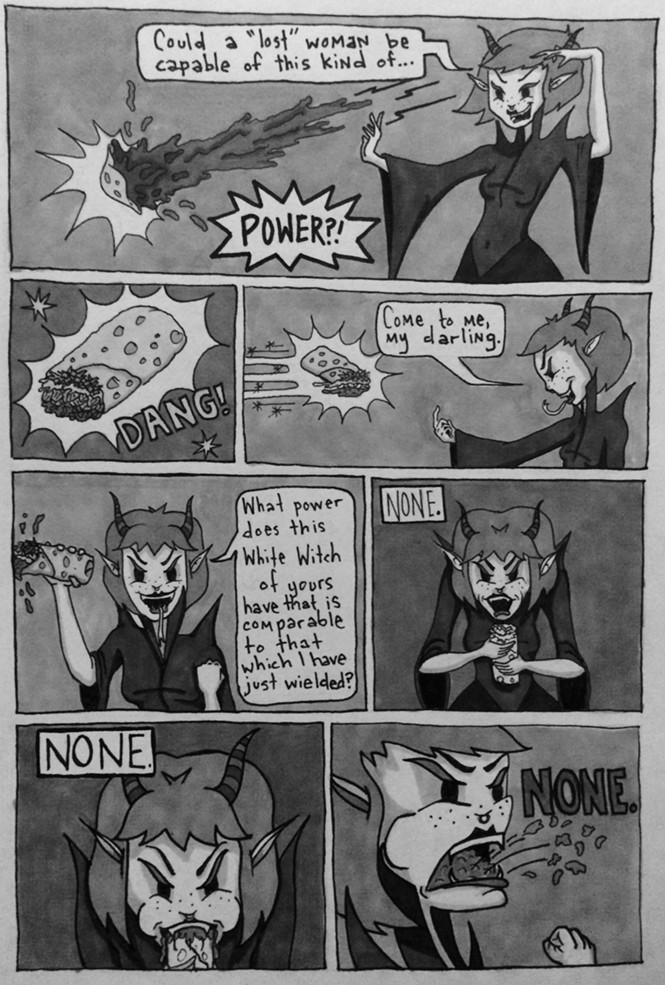 Gavin: Did you go to college or take any formal classes, or were you mainly self-taught?

Athena: I took one drawing class at a community college to fulfill a general requirement. I don't think I'll ever take another drawing class again. I paid like 300 dollars to learn how to draw plastic fruit in various lighting.

Gavin: What was it like for you developing your style of the years?

Athena: It was mostly just a matter of me getting progressively less shitty at drawing as I grew up. That's basically it. To a certain extent, I think my style has pretty much been the same since middle school. I resigned myself, pretty early on, to my limitations as an artist, so everything I've ever done has always been pretty cartoony. Insofar are writing style goes, I try to have an irreverent and self-deprecating sense of humor. I like to poke fun at generational idiosyncrasies. People in their twenties are unintentionally hilarious, literally constantly, and I am no exception. I just think I'm hyper aware of how goofy we, as young people, are no matter the lengths we go to be worthy of being taken seriously. It's a style that wasn't so much cultivated as it was just ingrained in me by being constantly bombarded by my generation's various absurdities. Coffee shop intellectuals, the phrase "I liked them more when they were in the clubs," top knots, the whole craft beer thing, you name it. We're just total goons.

Gavin: What made you decide to start publishing comics for people to check out?

Athena: Basically, I was operating under the theory that drawing comics was a relatively untapped means of getting laid. Think the last verse of MC5's "Teenage Lust" but with goofy drawings. Just kidding. That's ridiculous. Let's see. Boredom? Existential validation? I don't know. It just seemed like something cool to do.

Gavin: What's the process like for you in creating a comic, from story to final version?

Athena: It's pretty simple and I typically just wing it. I do everything by hand, initially. I figure out how I want to lay it out, draw the cells, pencil in everything and when I'm happy with that, I go over it in pen. Then I just use my trusty grey scale markers and color it. I'm basically just making my own coloring books.

Gavin: Do you try to plan ahead where you're going with it, or do you find yourself making it up as you go sometimes?

Athena: The one I have printed I did completely by the seat of my pants. I just started and wrote it as I went. I'd have a moment of inspiration, like, "Oh, let's throw in some irreverent bible references," and just go nuts. I'm working on the second one right now and I did write this one. Or at least I have a somewhat cohesive story line that I'm following, but it's much the same as the first, in that I'll randomly come up with something I think is clever, jot it down and just go from there.

Gavin: What's the reaction been like from people who check out your comics?

Athena: Super positive, actually, which is awesome. The only actual constructive criticism I've received was in regards to the amount of profanity I use and it being kind of illegible where the text is concerned, but you probably know Rory Donahoe and he's basically the Michael Jordan of picking shit apart. I did appreciate it though, and have kind of dropped the loopy lettering that I started with and opted for something that I think is easier on the eyeballs. As to the profanity, hey hey hey, fuck you Rory.

Gavin: You've recently started putting comics out online, what made you decide to essentially give them away for free?

Athena: I'm no Alan Moore and I'm no Brian Bolland. I don't have any disillusions or visions of grandeur in regards to what I'm doing. It's a hobby that I like sharing with people, not a get rich quick scheme. Plus, I feel like when you're just starting out, it's more about getting people to pay attention to what you're doing and people pay attention to free.

Athena: It was kind of just a thing that happened. My friend Ricky Vigil asked if I was going to have a table, and I had planned on it, but never gotten around to it, because I'm lazy and unmotivated, so he offered to share his table with me. I already had everything edited and sized, so I basically just printed them and dropped them off with Ricky. I still owe him some pizza for that.

Gavin: What have you got planned as far as new works? Any story ideas you can share with us?

Athena: Just truckin' away at the second comic. This "installment" is going to hopefully be infinitely better and longer than the first. It's basically a mystery comic where my all-girl mystery-solving gang, The Nancy Drew Tang Clan, helps solve a late-night, post-bar food crisis centering around Beto's and Big Daddy's. I'm really excited about it.

Athena: Well, assuming that I don't meet an untimely demise, I hope to finish this comic, get it printed before the year's out. And hell, maybe even have it online in a timely manner. And also bring an end to world hunger. 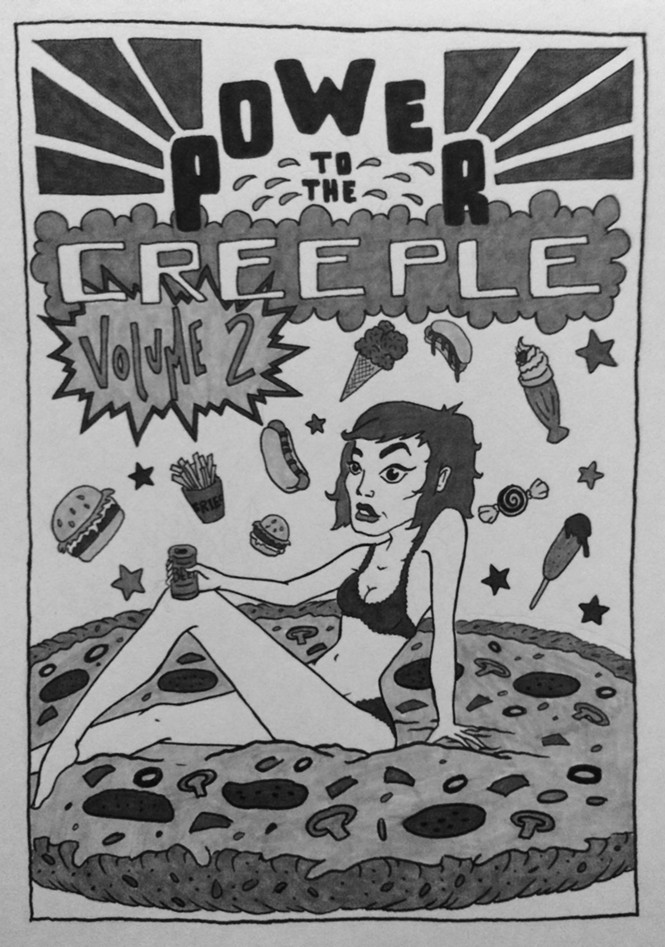 Athena: It would be a dick move not to plug Ricky Vigil's stuff and not just because he's been so immensely helpful and supportive. Super Cool & Stuff is so good. Check it out. Seriously.