Dorito Man is dead, we shot him in the desert (video) | Buzz Blog

Dorito Man is dead, we shot him in the desert (video) 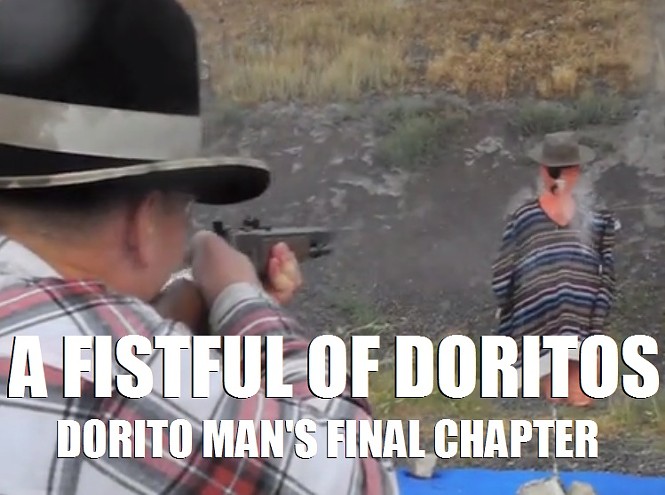 As they say in Game of Thrones, "All men must die," and such is the case for Dorito Man, the statue made in my likeness out of 100 pounds of Chile Limon flavored Dinamitas Doritos.

After it molded in City Weekly's foyer for a few months, we reluctantly had to dispose of Dorito Man and did so in the best way possible: by dragging him out to a shooting range in the middle of nowhere and blasting him with old-timey cowboy guns.

For some context to this "story," you should read the origins of Dorito Man. If clicking that link is too hard, essentially, we met a guy on Craigslist who was flim-flammin' loose Doritios for Xboxes and so, naturally, we bought some and hired a local artist to forge said Doritos into a man-like shape.

It was a spectacular piece of art. But the summer heat began to take its toll on our Dorito De Milo after its months of standing guard in City Weekly's foyer. The mold-induced smell was terrible (like a box of Wheat Thins filled with old Play-Doh) and, most importantly, I started to feel bad for our receptionist, who had to sit right next to it. I knew Dorito Man had to go. But how?

Picking the best way to plug  Dorito Man wasn't easy. His death needed to be poetic, beautiful and fitting for a life spent encased in hardened cheese dust. For the sake of posterity, here are a few of the ideas that never came to fruition:
Ultimately, we decided that dressing him up like a cowboy and shooting him would be the most efficient and honorable way for him to leave this world. Plus, I really wanted to dress him up in a poncho and an eye patch ...

After some calling around, we got in touch with Michael Steck and Adam Eaton of Joe Firearms and Five Star Arms, who were more than happy to lend a hand. Based in Sandy, they're a custom manufacturer of rifles, pistols and shotguns with an emphasis in NFA style firearms and custom Cerakote gun coatings. They also import Pietta cowboy guns and act as the U.S. service center for all Pietta guns. Because we desperately wanted to shoot Dorito Man with some old-fashioned cowboy shit, we knew these were our guys.

So, a couple weeks ago, on a rainy Wednesday morning, we carted Dorito Man out of the City Weekly offices to a private gun range near Eagle Mountain called The Farm. It was here where Dorito Man would finally leave this world...