Salt Lake City has a new nickname and it sucks...it sucks sooo bad 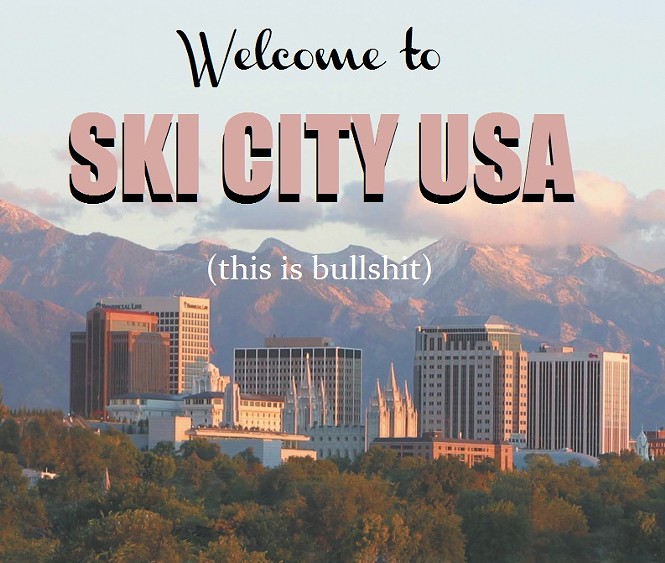 Coming up with a good nickname is hard work, and since Steamboat Ski Resort in Colorado already owns the rights to "Ski Town, USA," what other nickname could Visit Salt Lake possibly come up with other than "Ski City USA"? Yep, that's actually Salt Lake City's new nickname, "Ski City USA," which makes it sound like the entire population of SLC is working at a discount sporting goods store.

Not that there's anything wrong with that; I love Play it Again Sports and got a great deal on a bike there once. But come on, seriously? Ski City USA?! That's all we got? If this new nickname doesn't bring up images of rear-entry Nordica boots, then at least admit it's lazy. There's already a Fun Town USA, a Car City USA, a Furniture City USA and Huntington Beach claimed "Surf City, USA," last year; that sucks, too...


To be fair, SLC's new moniker is the brainchild of Visit Salt Lake and the four resorts that occupy the Cottonwood canyons: Solitude, Brighton, Alta and Snowbird. Tuesday morning, Visit Salt Lake, along with Salt Lake County Mayor Ben McAdams, met with media folk at Market Street Grill to announce the new $1.8 million ad campaign, a rebranding effort with the goal of luring out-of-state skiers or anyone looking for a good deal on some cheap used ski equipment.

According to the Desert News, Mayor McAdams loves it:


"Ski City USA is a fantastic alternative to the traditional ski or snowboard experience where visitors are restricted by the limited offerings of a small resort town," said McAdams.


Cities and states coming up with catchy slogans isn't anything new and, in the past, Utah's been reasonably good at it. Ski Utah's slogan, "The greatest snow on earth," makes sense. It's brash. It's confident. And It inspires you to come shred the alleged "greatest snow" in existence. On the other hand, "Ski City USA" sound like everyone in Salt Lake City is hawking CB jackets and, in the off-season, slightly used golf clubs and tennis rackets.

Here are a few nicknames that, based purely on speculation, were more than likely scrapped before ultimately deciding on "Ski City USA," which makes us sound like we're the sponsors of a youth soccer team:
Oh yeah, and here's the official tagline for this thing: "Once you've stayed in Ski City, you'll never stay in a ski town."

In other words, "Once you've stayed in Ski City, you'll never stay in a ski town because of our double reward points on great deals like buy-one-get-one Oakley goggles."

If you have any better nicknames, let's have it in the comment section.