In The Loop: 10/4/14. Rolling Fashionably & Sketching An Open House

Hello to all you radiator-repairing, hand-warming, fireplace-cleaning, wood-chopping, coat-cleaning, told-you-to-enjoy-the-heat-while-it-lasted enthusiasts! Seriously, what did I say just two weeks ago?! Now you're all standing in line at Pib's or Consignment Circuit looking for a better jacket to so you can tread into the canyons and stare at leaves. That's what the next six weeks hold in store for you if you like looking at nature. For those of you who aren't into staring at nature, we've got some suggestions below for the next couple weeks. In lieu of 337 Wall artwork, here's a shot of local band Ocean Commotion from last week's performance as the opening band of the X96 Big Ass Show.

Tomorrow, October 5, the BallroomUtah Dance Studio will be offering a hip hop fusion dance class from Flava Entertainment Productions called Hip Hop Church. To be blunt, its a 90 minute class that only costs $5 and covers a lot of ground within several genres of performance art when working with modern music. That's a hell of a steal for anyone, whether they be totally experience or a beginner. If you're into dance and performing arts, I highly encourage taking a look at it.

Meanwhile up at Snowbasin they'll be throwing their annual Pray For Snow Party. This is a completely free, all-ages event that will feature live music, some cool drink specials and some sampling of food you'll be able to get up there all season long. Plus they'll announce the winner of their big Instagram contest they've been running all summer long. Take some case for the food and drinks, but enjoy all the free activities they have to offer.

On Wednesday, October 8, KUER will take over the Rose Wagner for a one-night showing of the film This Ain't No Moise Music. The film is a profile of Chris Strachwitz, a German immigrant who came to the U.S. in the '40s and founded the record label Arhoolie Records. The label itself focuses on cajun, zydeco, bluegrass, regional Mexican music and all things “good roots.” If for nothing else than exploring the history of music in America, you should definitely go see this one.

On Friday, October 10, Provo Fashion Week will end with two days worth of events. Primarily focused around their fashion show featuring dozens of local designers, all putting their work out on display fro you to check out on the runway. Not to mention material from shops and boutiques joining in the fun. The first one will be on Friday starting at 6:30 p.m., and the second will kick of at 3 p.m. on Saturday. Tickets for this are actually super cheap, but they're going mighty quickly. Snag a pair and go enjoy the snow.

Speaking of Saturday, On October 11, Wasatch Roller Derby will be holding their annual Beehive Brawl. If you're thinking this is a standard WRD event, try again. Every flat-track league in the state will be represented at this event, from Ogden to Moab. A five team double-elimination tournament with everyone's A-List players going against each other. The competition will kick off at 10 a.m. and run until they've crowned a state-wide winner. Check out their website for tickets.

Also on Saturday, if you need a break in the action, the SLC Arts Hub will be holding an Open Hub event! Completely free to the public, much in the way Poor Yorick opened their studio last weekend, this is a chance for you to explore the normally closed-up artspace and see what they've got going on inside. You get a first-hand look at art, performances and more from 801 FM, Damba Fogo, Derek Dyer, Jimmi Toro, Element 11, Revolution United, Rhythms Of Life, Quinn Ressor, Retrofutura and more. The open event will run from 6-9 p.m.

On Sunday, October 12, the Urban Flea Market will be holding their last event for 2014. Taking over the parking space on 600 South and Main Street, the organization will have their biggest market to date, featuring nearly 100 vendors and plenty of opportunities to buy/sell/trade goods. Grab a wagon with useful junk you don't need and go see what you can get for it.

On Monday, October 13, Salt Lake Design Week will kick off. The event will feature dozens of workshops and exhibitions, stretched throughout the week at multiple venues. To try an list them all here would be an insult as there is SO MUCH STUFF to check out in just five days. We'll primarily highlight the kickoff event for you here, which is Vol. 13 of the Pecha Kucha SLC series, happening at The Fallout at 6 p.m. Visit SLDW's website for a complete list of all the events and be sure to at least check out 2-3 if you can. 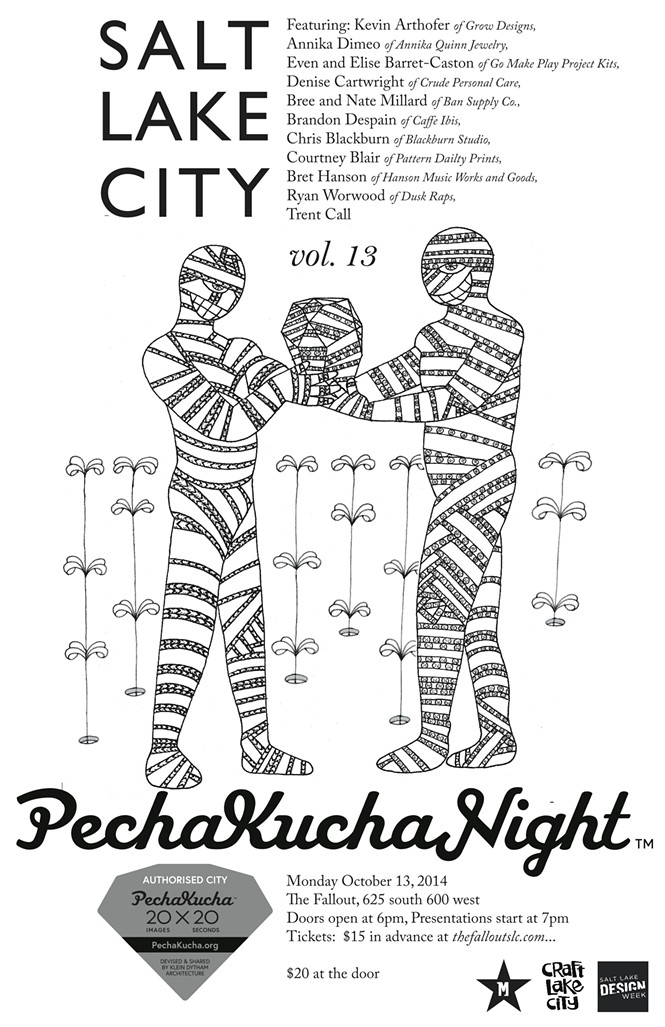 On Friday, October 17, Sketch Cabaret will be holding another event after Salt Lake Gallery Stroll. The event will take over The Metro over on 100 South, with music from MorZFeen and TurtleBoy while you get to sketch women latex. Artists looking to participate need to pay $15, general admission is simply $10 after that. For more details on the event, check out their Facebook page.

And then finally on Saturday, October 18, we have the return of An October Evening! Taking over the Masonic Temple's main theater again, the evening will feature short films, a couple fashion shows, live dance performances and more, all with an alien encounters theme to it. (No, not the old haunted attraction.) This show is always a grand performance and usually sells out quickly. Snag your $10 tickets while you can!

As for the blog, we'll have some tidbits from local theatre, art, film and other areas over the next couple weeks. Maybe even some wine. But we're still keeping ti all one the down-low for you to come back and read it all. As always, we'll see what happens.