A conversation with an ex-Mormon who started his own cult 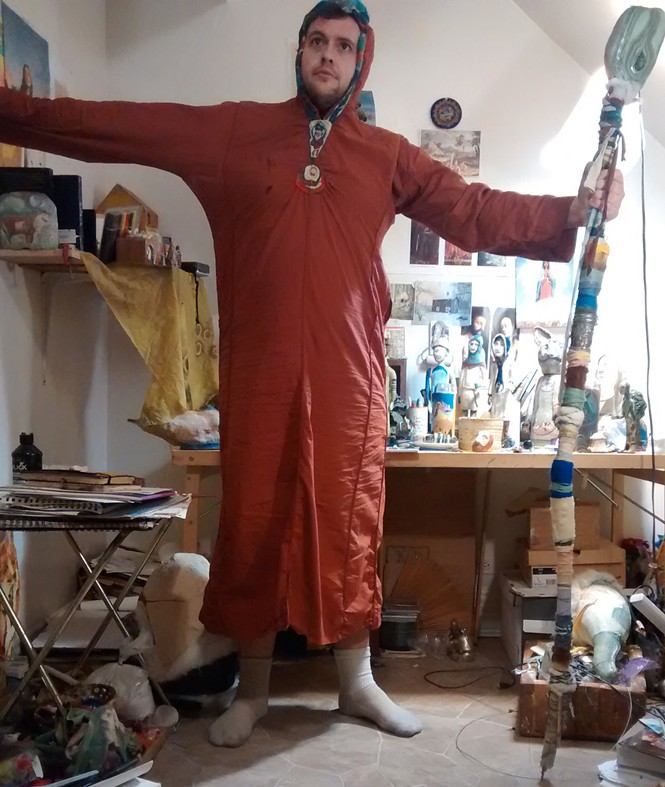 Christopher Allman experienced the typical ex-Mormon story. He grew up in Utah County. He served his mission. He went away to school. He started asking questions about theology and faith. And, eventually, he left the church. The only difference is, instead of complaining about Mormonism on Internet forums, Allman started his own religion and, subsequently, his own cult.

The idea of someone starting his own religion shouldn't sound too audacious, especially for Mormons. In fact, that might be the understatement of the year. But unlike The Church of Jesus Christ of Latter-day Saints, Allman's religion started as an art project. While working on his MFA thesis, Allman decided to merge his love of art and religion by creating his own cult called the The People of Ieya. To help visualize what this ideal society would like, Allman built a massive model town with tiny homes, in-depth back stories and, of course, religion.

Essentially, this miniaturized utopia incorporates Old World lifestyles with advanced technology. His website lays out every intricacy of how this city would operate if it were actually built, including details on community roles, literature found in the city libraries and specific characteristics surrounding the center temple, where followers worship Ieya. 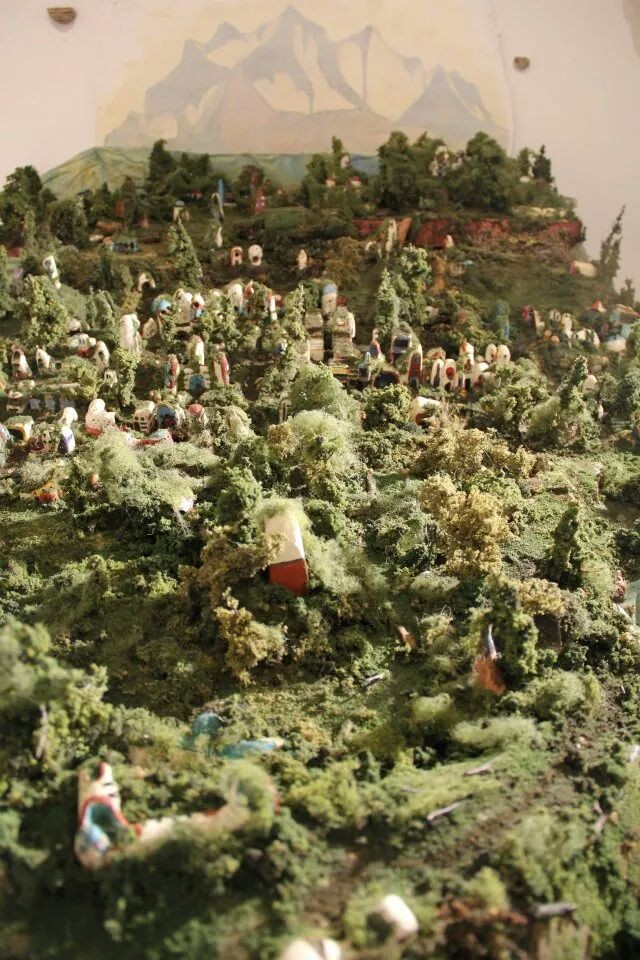 Allman is a huge sci-fi fan (sort of like L. Ron Hubbard) and as he tells it, the Ieya were a group of time-traveling beings from the future, god-like creatures who, for whatever reason, wanted to advance the human race. They appeared before the prophet Xavier Toubes (whose name was borrowed from Allman's ceramics professor) who was given ancient knowledge that was later passed down to Allman.

The Chicago-based religion is entirely made up by Allman, and he'll be the first to admit that Ieya is a fictional story that arose from smoking too much weed. But that hasn't stopped him from attracting new members and even, he says, attention from law enforcement. Allman makes a living as a freelance artist and has yet to make profit from his cult, but he claims he was "aggressively tracked by the FBI" in 2013.

Though the cult is still in its infancy, Allman hopes it will grow to the point where he's a benevolent, god-like leader. (Not a joke.) But for now, there's no secret rituals or weird Kool-Aid involved. Essentially, all they do is meet once a week for a big dinner to talk about current events, smoke weed and meditate.

Though some people believe that The People of Ieya is simply designed to mock mainstream religions (Mormonism specifically), Allman doesn't see it that way. He calls it appreciation.

On Thursday, Oct. 16, I chatted with Allman about the issues that come with starting your own cult and what his Utah-based Mormon parents think about it. The following interview has been edited for brevity and clarity:

So, what’s it like being a cult leader? Whenever I think of cults, I'm reminded of that Simpsons episode where Homer joins a cult and his leader seemed to have a pretty good time.

It’s awesome, especially since having grown up Mormon and having being told what to do your whole life. Now, the roles are reversed, and I get to tell other people what to do, even if it doesn't quite have the same gravity. It’s fun. It’s a real ego-boost. I read this study where a lot of cult founders come from families where they didn't have strong parental figures or, like, they didn't have parents that they admired in a way. Not to be overly critical of my parents, but that’s kind of how I felt. I kind of wondered on an evolutionary level that if people come from a weak parental background, if they felt the impulse to start their own tribe. I sort of feel that impulse in myself.

Is this just an art project that grew into something bigger?

Yeah, definitely, much bigger. I want it to be for real. But you know, I’m not mentally ill. I don’t believe that time travelers have been visiting us.

Do you think you’ll get to the point where you're sitting on a pyramid bossing people around?

Even though the theological framework is fictional, I tried to make all the ideas and ethics involved based on my own beliefs. So, whether or not it would go to that point, I don't know. But if it did, yeah, that would be awesome. I tried to construct it in such a way that if it did, it would be a community I would want to be part of. So, yeah, I would like it to go that way, but I don't know if it ever will.

Run me through the day when you decided to do this.

I used to be a religious-studies major and I love science fiction, and I guess I was sort of floundering with what I wanted to sink my teeth into for two years. I guess it just kind of clicked that I wanted to start a sci-fi religion. I was probably high, just because I am a lot. The city came next, and then it just expanded from there.

You openly use the word cult, which I think is interesting considering that most people who start cults stay away from that word.

I think of it the same way that feminists use the word "bitch." By using it, it takes the power out of it. I know the word cult is coming, so it’s best to just use it yourself and reclaim it. You know, this is sort of a counter-culture religion, and one element of counter culture is to reclaim things from the mainstream that are negative and make them seem positive.

Do you have members? How does one join your cult?

Right now there's about 15 members. There’s people on the membership rolls and within performances I’ve given, there’s been people who have signed up and are on my e-mail listings. I don't know if any of them are on a different page then me. I don't think anyone sees it beyond an art project, yet. I’d like for there to be people that do.

What does this cult do? I saw you guys have a weekly “feast.”

Basically, the weekly feast is all that’s happening now, it’s more of a discussion-based event. We eat food and talk about ideas. It’s only happened three times so far.

Does your cult have any practical use for drugs?

I actually, haha, so when I made my MFA piece (the model city), I made that entire thing while stoned. So, I think that being high went so much into the creation of it, it’s sort of the impetus of it. Also, you know, psychical activities like fasting can invoke a physiological response that feels spiritual. I think a drug can do the same thing, it’s sort of a short cut route to that. We understand how drugs work and how fasting and meditation work. I see them both as one in the same. I love the way it makes your mind work.

You claim you were under “aggressive surveillance by the FBI" in 2013. Can you talk about that a little bit?

Yeah, that’s true. Chicago has a long reputation of crazy FBI things. Basically, I was doing a performance in the park and walking around wearing robes. I had my “followers” with me and we did some meditations and I preached a sermon. Then this guy shows up and he’s like, "Hey, can I join? Who here uses drugs?! Raise your hand." We're like “Who is this guy?” Turns out he was a special agent. It happened shortly after I started the cult. I’m guessing they saw what looked like a cult leader leading people around a park and wanted to see what the big deal was. It was very stressful. They had a car parked outside of my house for a week and eventually my neighbor said he saw them going in and out of my apartment and so I confronted them, and they were surprisingly very forthcoming. They at least said I was not going to be arrested, which was a relief, but it was still pretty stressful. It was a lot more stressful for my girlfriend, I think.

What does she think about your cult?

She loves it. I met her because of the cult. She saw it and was interested in it. That’s how I met her. We live together and she’s been involved in a lot of the behind-the-scenes stuff.

You were raised Mormon. Tell me about that, and why you left the church.

It’s a pretty typical story. You know, I was 23 and finished my mission. I stumbled across weird church history stuff online and gradually looked more into it. I was like, "This isn't what I thought it was." Because I’m a counter culture artist, I never really fit in. But at the same time, I was super-involved. I consider myself atheist, agnostic, but I feel like I still have a lot of spiritual feelings. I miss [Mormonism] a lot, but I'm happy to be out.

Did creating this cult help you appreciate Mormonism in any way?

I definitely think it’s helped me empathize with Joesph Smith, in a way. To put myself in his shoes, to create a utopian community. I keep thinking about how my ideas for this religion might some day become irrelevant. You know, kind of like how some of things Joseph Smith said have become irrelevant.

What does your family back home think?

They don’t say it, but I can tell they don't like it. When I bring it up, they get quiet and awkward. Like, I tried to show my mom my website and she would be like “Oh, that's nice,” and not look at it. I’m pretty sure they might think I’m delusional or that I think it’s more real than it is, I dunno. Or maybe they just think that I’m making fun of Mormonism.

But don't you think some Mormons might actually think you are making fun of them?

I've had a few people get worked up about it and I couldn't understand why, until I realized they thought I was making fun of Mormonism. I mean, it is very much a riff on Mormonism, maybe even a parody. So, to a certain extent they are right. But it’s also an homage to Mormonism. It celebrates the things I like about it. I like the sci-fi element of Mormonism. I like how deep and complex the theology is, that it sort of has a sci-fi element that gods are evolving forever. There’s even a whole group of trans-humanist Mormons out there, who kind of map that secular scientific thought from Mormonism. I don't believe in Mormonism, and this is sort of a way for me to create my own version that indulges the things I like, minus the things I don't like.

What is the ultimate goal of this cult? What's your 10-year plan?

You know, I would love to have this city built. I would be surprised if that happened. The way cities are made up, they’re so car-centric, where you don't have a market or town center to go to and interact with people. They create a sense of isolation. Way before any of this, I’ve been thinking about a hypothetical city that I would love to live in. I would love to design a community that better serves people's needs than they do currently.

You could always just move out into the desert.

Maybe I will! Who knows! If I could get enough people, I would. I totally would.

All pics courtesy of Christopher Allman