Starting tonight, SB Dance will bring us their annual Halloween showcase, this time taking a very different collaborative move than usual. Cannibal, A Love Story will focus on a love story gone completely wrong, with brand new performances and an original score that will be performed live on stage. Today we're chatting with performers Jeffrey Price and Genevieve Christianson, as well as SB Dance's own Stephen Brown and Winnie Wood, about the production and planning behind the two-night show. (All pictures courtesy of SB Dance, photos by John Brandon.)

Gavin: Hey everyone! First thing, tell us a little bit about yourselves.

Genevieve: I was working as a singer with opera companies and symphonies around the world when I was hired for a job with the Utah Opera. I was planning to continue a career path as a soloist-for-hire, but I fell in love, had kids and a wonderful civilian life. A friend introduced me to SB Dance. I was intrigued. Stephen and I hit it off. And voila.

Jeffrey: I’m a full-time professor at the U’s School of Music and a Steinway Artist (like being a sponsored athlete). I’ve known and worked with Winnie for ages on everything from radio shows to musicals. I worked previously with Stephen. When he and Winnie called with the idea for this show and wanted we to do the music, I was thrilled. It has been a terrific collaboration.

Winnie: I’m the Associate Director of SB Dance and I direct SB Dance shows. I don’t direct in the usual sense of “directing a play” because what we make are quite different from plays. Stephen is the main creator. My job is to help wrangle his creations onto the stage— to give them continuity, fix what’s wrong, imbue them with life. In my day job, I’m in charge of drama at an international prep school called Wasatch Academy. I also direct plays and have acted, danced, painted, and done almost every job there is to do in the performing arts.

Stephen: I’m the SB in SB Dance, though we’re slowly rebranding as Strange Beast Dance Circus, a name change that reflects work that isn’t dance at all but rather an idiosyncratic blend of many disciplines, closer to a movement circus than anything else. Formerly a professional dancer with companies around the nation, including RDT and Ririe-Woodbury locally, I founded SB Dance in 1998. My motivation wasn’t what you might think. I wasn’t really so interested in a me-me-me-I’m-the-big-cheese dance company. Rather, I wanted to be a part of something (I used to perform in every show) that, as a professional, I had occasionally nibbled on but never had a chance to chew: project-to-project rather than full-time, longer pieces (our shows are generally 60 minutes without intermission), and multi-disciplinary.

Gavin: What have each of you been up to over the past year in the performing community?

Jeffrey: Lots of operas at the U.

Genevieve: Low key singing here and there. This is the first production I’ve done in a few years.

Gavin: Stephen and Winnie, how did the idea for Cannibal: A Love Story come about?

Stephen: Rio Tinto had given me a fellowship to go to Papua New Guinea. From an artist’s point of view, I was to study how their mine operations are traumatizing indigenous people and a fragile, unique ecosystem. In Bougainville, I got lost in the shanty town and ended up eating lunch in a cafe decorated with human skulls. The rest is history.

Gavin: What was it like first formulating a plan and putting the elements together. And how did you decide who to bring on board for it?

Winnie: Making an original theatrical work isn’t the same as staging an existing play or even adapting a book. For us, we look at the elements at our disposal— for example, we wanted to work with Genevieve— and then we dream up a good structure or story for those elements.

Stephen: I call it “affordability,” a term I borrow from a user design—what kind of movement does a round door knob afford? For this show, we knew it was a Halloween theme. We wanted to have a stand-alone musical element. There was a certain group of people that we wanted to work with. All those elements afforded us to do Cannibal.

Gavin: For everyone involved, how were you first approached to take part in it and what were your first thoughts on the show?

Jeffrey: I got into my car one night. Stephen and Winnie popped out of the back seat. They spoke in low voices as I drove to an undisclosed location. They gave me no choice.

Genevieve: I found a horse head in my bed.

Gavin: Genevieve, what is it like for you to work with these folks on a show like this?

Genevieve: In an opera company, I’m given my music months in advance. I walk into the first rehearsal knowing exactly what I’m going to sing. For Cannibal, I received my music just a few weeks before opening. And we’re still figuring out what I’m singing and where. That uncertainty is sometimes uncomfortable. On the other hand, it’s much more of a collaboration. They ask me what makes sense for my character to do or to sing at a specific moment.

Gavin: Do you get to dance in this show?

Genevieve: As a matter of fact, at the last rehearsal, there was a new waltz for me and the Butcher.

Gavin: Jeffrey, what's the story behind the piece you've composed for this performance?

Jeffrey: We’re calling it “jazz noir,” a term we invented because the music can’t be described categorically. The music is diverse, from a gospel to operatic. Lots of sounds. Huge challenge.

Gavin: How is it for you collaborating with Alden Terry and making music as a two-piece band?

Jeffrey: A piano, cello, and bass are going to sound like much much more than a two-piece band. The diversity of sound in this show is really amazing. Also, there is music being played continually through the show, softly underscoring dialogue. Alden and I go way back— with Winnie, too— but we haven’t had a chance to play together for several years. It’s very exciting.

Gavin: Winnie, how would you say this show differs from the others that SB Dance has produced over the past year?

Winnie: The musical element is a new level for us. We worked with a terrific rock band last year for Of Meat and Marrow, but they were mainly in the orchestra pit. Rock bands are highly amplified too. The musicians this year are onstage and play acoustically. The sound dynamics and quality are concert quality. So there are parts of the evening where the music stands alone in a way it never has before in an SB Dance show.

Gavin: Stephen, how does this show fit into the last sixteen years of work from SB Dance?

Stephen: I think we’re making our best work ever. It’s much clearer and direct. The stories are stronger. The elements integrate better. The performance and design teams have never been better. The company is also receiving a new degree of community recognition. Bigger audiences. An energized board. Higher visibility. Did you know that in our region SB Dance is the ONLY professional, regularly-producing art group dedicated to the vision of a single artistic team? My team makes an original work, we make it ourselves, and we don’t produce works by other people. We’re boutique manufacturers. I hope we’re pioneering a path where more people appreciate the significance of supporting artists who show their work directly to the public rather than through a third-party. The Wasatch has many outstanding professional performing art companies, but the cultural ecosystem is not diverse. I think Strange Beast shows that can change.

Jeffrey: Oh, are we opening soon?

Winnie: This is more fun than Christmas.

Stephen: Do we have time to add one more scene?

Gavin: What can we expect from Strange Beast over the rest of the year?

Stephen: We have some unpublicized events coming up— better go to our website and get on our email list to receive an invite. Wine Theater Food! (WTF!) on January 17 is our annual fund- and one of the best parties in town. During Sundance, the Strange Beast Studio Bar is a pop-up bar where folks can hang between flicks, chat, or watch as we create onstage. I’ve even been known to take suggestions from the peanut gallery. Our new creation arrives in June 2015. A new kids workshop called The Romeo and Juliet Project. More Cultural Confidential interviews coming up. 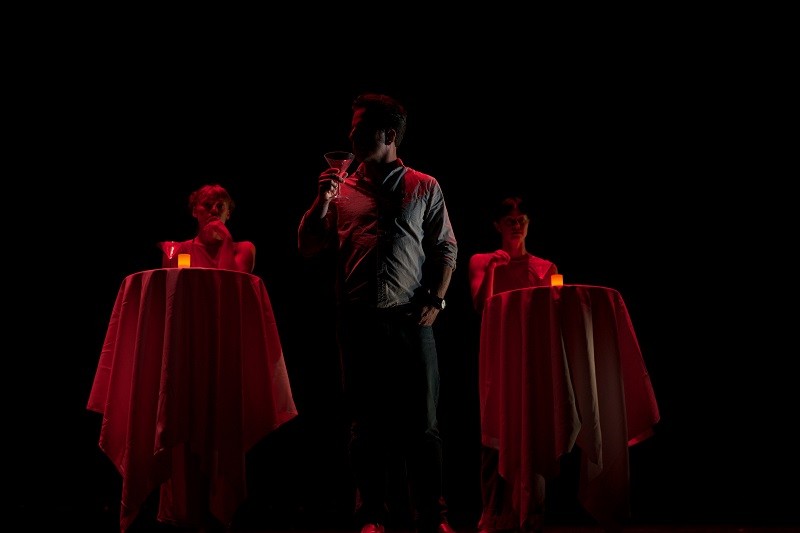 Jeffrey: 2015 marks a century since Scriabin died and I’m doing a special concert of his works. There might even be a Strange Beast element involved.