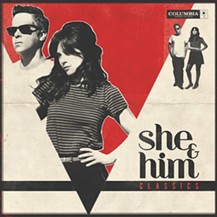 Greetings, music fans. With last week being Thanksgiving, the world of national releases was a barren wasteland. But now we're back with another installment of New Tunes Tuesday, and a mix of a music that's as eclectic as a Thanksgiving-leftovers sandwich.

Despite guitarist and founding member Malcolm Young departing after being diagnosed with dementia, classic hard-rock band AC/DC is still kicking and making music, including their latest, Rock or Bust. Revolutionary New York hip-hop crew Wu-Tang Clan just released A Better Tomorrow, which is rumored to be their final album.

Also out this week are two cover albums, one from Owen (the solo project of Chicago multi-instrumentalist Mike Kinsella) and She & Him, as well as the third album from Ohio indie-rock band Walk the Moon.


Wu-Tang Clan, A Better Tomorrow
"Ruckus in B Minor"

She & Him, Classics
"Stay Awhile"

Owen, Other People's Songs
"Under the Blanket" (The Smoking Popes)