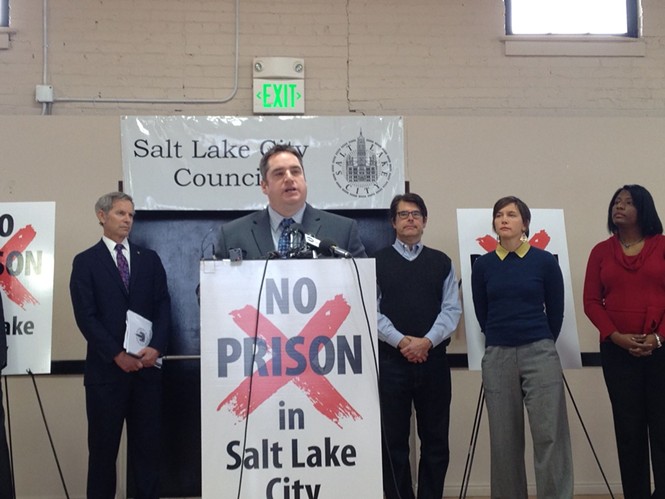 A press conference at the Utah State Fairpark was packed with more than a hundred residents angry about the idea of the new state prison being relocated in their back yard. Next to signs reading “Keep the Joint at the Point” and “Leave the Priz Where It Is” members of the Salt Lake City Council, Salt Lake City Mayor Ralph Becker and lawmakers from Salt Lake City stood shoulder to shoulder in opposition to the potential relocation of the prison at two possible sites in Salt Lake City unveiled at recent hearing of the Prison Relocation Commission.

The state legislature's Prison Relocation Commission initially unveiled six potential sites, two of which have already been withdrawn at the request of the land owners who submitted their properties for consideration—one in West Jordan and one in Saratoga Springs.

At the Tuesday press conference council members unleashed a fusillade of arguments against prison relocation, at the possible Salt Lake City sites, one called “Airport North” a 500-acre parcel north of the Salt Lake City International Airport and the other located at approximately 7200 West just north of I-80.

“So who will pay for all of this? It will likely fall on the shoulders of Salt Lake City taxpayers,” Luke said to groans of disapproval from the crowd.

He also questioned the Legislature for its stated goal of moving the state prison in Draper so that the land underneath could be developed for a business park to attract out of state companies into relocating to Utah. Luke challenged the Legislature's “backwards thinking,” arguing that such a business park would be much more logical in Salt Lake City at one of the proposed prison relocation sites that are within minutes of the airport.

Council member James Rogers, whose District 1 includes both of the proposed prison sites, decried the economic burden the prison would place on Salt Lakers.

“Salt Lake City already has an incredibly high 42 percent of its land as tax-exempt,” Rogers said. “A new prison with its tax exempt status would not only increase the tax burden for residents but would destroy property values.” Rogers pointed out that businesses and a youth soccer complex near the proposed sites would likely never have agreed to set up there if they knew they would soon become neighbors to a penitentiary.

Kyle LaMalfa whose District 2 on the west side already contains or borders four community correctional centers, said the Prison Relocation Commission did not consider the impact the prison relocation would have on families in his district.

“People growing up on the west side have some of the largest families in Utah,” LaMalfa said. “We don't want our kids growing up in the shadow of a prison fence.”

Salt Lake City Mayor Ralph Becker challenged the commission for failing to consider environmental impacts at the sites, including seismic activity concerns at the I-80/7200 West site.

“The 'Airport North' site was underwater as recently as the '83-'84 flood. It's also a site where our airport protection runway zone exists,” Becker said.

Becker said such major oversights, including proximity to schools, should make the Prison Relocation Commission look more carefully at how it determines sites to relocate the prison.

“If the state is serious about looking for a site, then they better look at sites much more carefully then they have today,” Becker said.

Luke told the crowd that not only was Salt Lake City not the right site for relocation but that citizens need to challenge lawmakers about why the prison needs to be relocated at all. He argued that the conversations needs to be shifted back to simply rebuilding the prison at its existing site.

But the city may have trouble on that front as prison relocation has built up significant political momentum on capitol hill. Lawmakers on the hill aren't just excited about developing the land under the prison but also as part of the discussion also passing significant criminal justice reforms.

The Pew Charitable Trust and the Commission on Criminal and Juvenile Justice reported to legislators that the prison's population would grow by 37 percent in the next 20 years unless significant reforms were enacted to contain that growth. Such reforms could bolster community resources for mental health and substance abuse treatment and help slow recidivism in the state.

According to the Utah Department of Corrections, nearly 40 percent of the inmate population was convicted in Salt Lake County. Luke believes that criminal justice reform will still happen in the Legislature and will help reduce recidivism in the city even if the prison is not relocated, because the prison will still need to be renovated.

“I think the political will [for reform] is going to be there as much as it is now,” Luke says.

Rep. Eric Hutchings, R-Kearns, who will be presenting the bill in the Legislature to enact criminal justice reform, disagrees. After 14 years in the Legislature, and six as chair of the committee tasked with funding corrections programs, Hutchings believes that without prison relocation, lawmakers will not be able to get behind a historic opportunity for criminal justice reform.

“Sure, lots of talk would occur, but when the discussion of money to implement new programs comes up it would go belly up and be dead,” Hutchings says.