This past Friday I made my way around SLC, mainly because the weather was just right for February. So right, it felt like April. I decided I was going to hit up a local show at Kilby Court and interview some of the local bands I haven't chatted with before. I've been going to enough Kilby shows to know that just because it says 7 p.m. for the doors doesn't mean that's the start time, especially for a three-band showcase. Oddly enough, this was one of the few shows to start on-time in more years than I can remember, so I missed the first act. I did, however, catch the middle band, a math-rock trio by the name Fish Eating Children, who we're chatting with today about their careers so far. (For most of this interview, the band chose to answer as a group.)

Gavin: Hey guys, thing, tell us a little about yourselves.

FEC: We’re just some laid back dudes with fresh faces and fresh tunes. We try really hard to say witty things and we’re generally mediocre at what we do. But we love writing music, and we want people to hear it so that they might enjoy it too. We’re ready to rock the world or just Salt Lake or just Evan’s Basement.

Gavin: What got each of you interested in music and what were your biggest influences growing up?

Zeus: Both of my parents are musicians so I’ve been around music since I was a kid. As for the artists that influenced me the most I’d say Korn, Nirvana and The Fall of Troy.

Evan: I’ve also been around music ever since I was young. My parents often listened to Pink Floyd and The Beatles, so right away I was hearing rock music as a kid. But I was most influenced by my brother, who also plays the drums; he introduced me to the heavier side of music with bands like Korn, Slipknot and Nine Inch Nails.

Gavin: What was it like for each of you getting into the local music scene?

FEC: So far, it’s just been a blast. At every show we’ve played we’ve met some real, genuine people. And it’s just cool how total strangers all gather to enjoy something that we all enjoy, and just being able to be apart of that is awesome. Who doesn’t love to share their art?

FEC: We met a few years back in high school through some mutual friends. We almost instantly clicked and became good friends and now we pretty much consider each other “musical soul mates.” So you could say it’s getting pretty serious. Insert winky face here.

Gavin: How did the idea come about to start a band, and where did the name come from?

FEC: In 2013 we played (and lost) in our school sponsored Battle of the Bands, and immediately after we started writing songs together. We cycled through a few different members and musical styles, as well as band names. But we eventually settled on the basis that we’d like to play a variety of genres with the tone of Progressive Post-Hardcore. Evan’s brother came up with the band name, and it sort of just fit. 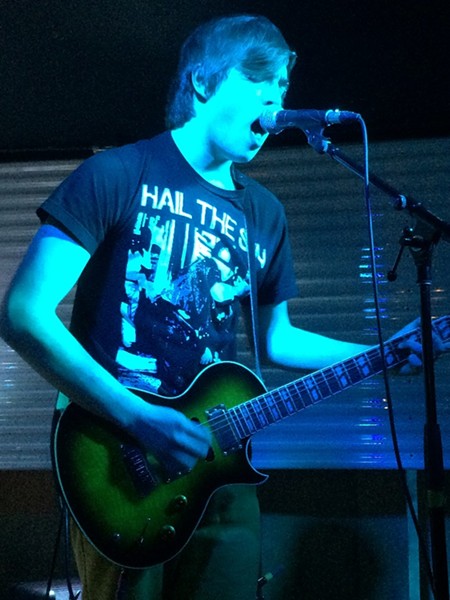 Gavin: What made you go for a faster-paced kind of math rock and how is it for you to play off each other?

FEC: For the choice of style I’d say just three words: Energy, Variety, and Technicality. The thing is, is that we can all enjoy listening to math rock, but yet we still all listen to stuff anywhere from Explosions In the Sky to Animals As Leaders. And we can take things from anywhere in between and use what we like and try to infuse it in with our style. And the more we’ve played together the more there’s been sort of a “musical synergy” if you will, and that’s really helped us a lot with our writing.

Gavin: What's it been like playing around SLC and gaining a following?

FEC: Salt Lake City has such a large thriving music scene and we’re quite grateful to be of it. As for our small but growing following, we’d have to attribute that to our wonderful friends and families that are very supportive of us, they often come to shows as well as rep the band name, and we’re very thankful for that.

Gavin: For a period of time it looked like you were looking for a bassist, but you seemed to have found one now, right?

FEC: We’re very happy to welcome our newest addition to our fishy family! Jacob Roller has been added to our lineup as bassist, and we feel considerably lucky to have him.

Gavin: Do you have any plans in the works at the moment to record an album, or mainly writing songs for now?

FEC: Right now, we’re mostly focused on finishing some songs, but we’d really like to get a single out for people to hear.

Gavin: Any plans for a tour?

FEC: Definitely, but most likely not for quite a while, we’d like to gain a following here as a local band, as well as focus on recording. But hopefully soon we’ll be able to hit the road.

Gavin: What can we expect from both of you and the band for the rest of the year?

FEC: We’re quite confident that we will have an EP to release this fall, so we’re very excited for that.

Gavin: Do you have anything coming up soon you wanna plug?

FEC: Yes! We are currently acting as a session band for our good friend Duncan Clawson. We will be on his second EP titled , as well has his full-length album titled Dear, Friends. We will also be doing a self-made west coast tour this summer under the name Duncan Clawson & The Vessels, and we couldn’t be more excited about it.