The Long Road to a Statewide LGBT Nondiscrimination Law

March 12, 2015
comment
In 2008, Rep. Christine Johnson, D-Salt Lake City, introduced to the Utah Legislature a bill that would protect LGBT Utahns from being fired from their jobs or evicted for being gay or transgender. Now, after seven years of tumult and debate, bills getting shot down and bottled up in committee, protests, rallies, arrests, misinformation campaigns, and countless tears shed out of woe and joy, on Thursday, Gov. Gary Herbert signed into law historic legislation that simultaneously protects the rights of LGBT Utahns and people of religious convictions.

Here's a look back at Utah's long trek toward discrimination protections for all its citizens.

Johnson, an openly gay legislator representing Salt Lake City, proposes a bill that calls for workplace and housing protections for LGBT Utahns for the first time, while also offering exemptions to religious institutions like Brigham Young University. Johnson prepares not for a battle but for a very lengthy dialogue with her conservative and heterosexual colleagues on the hill.

“I’m going to thank my colleagues for hearing the bill and then gently move them forward,” Johnson said.

The bill did not escape a House Business & Labor Committee but was moved to the Interim for further study. Johnson at least saw the bill as the beginning of a necessary conversation.

“This is the only way we can stop the cycle of dehumanizing the LGBT community,” Johnson said. Critics like Paul Mero, former head of the conservative think tank The Sutherland Institute, criticized the bill for seeking to create a "special class" of protected citizens.

“I still consider it a policy that arrived D.O.A., and now I guess it’s just moved to the funeral home,” Mero said of the bill's 2008 defeat.

Johnson's bill is once again defeated by the House Business & Labor Committee. Johnson pleads with colleagues on the panel to at least let the full House debate the merits of the bill for the sake of LGBT Utahns.

"Voting in favor of this bill, voting to bring it to the floor so that these individuals represented have an opportunity to be heard on it, is not an endorsement of nontraditional relationships," Johnson said. "But voting against this bill and killing this bill in this committee is an endorsement of discrimination."

The committee killed the bill by an 8 to 5 vote.

Thanks to secret lobbying sessions between a group of LGBT advocates dubbed "The Gang of Five" and members of The Church of Jesus Christ of Latter-day Saints, the Church gets behind an ordinance protecting LGBT Salt Lakers from workplace and housing discrimination.

“Their endorsement was a direct response to the onslaught of negative press they’ve received over the last year,” Williams said.

The adoption of the ordinance sets off a domino effect of other cities adopting similar ordinances.

A "compromise" is brokered whereby state lawmakers agree not to try to undo Salt Lake City's ordinance, but in return, a statewide nondiscrimination law is not introduced on the hill.

Regardless, activists and citizen lobbyists like Eric Ethington challenged lawmakers for not even being willing to discuss the issue on the hill.

“Citizen lobbyists should be essential because we care the most, enough to make something happen. Really, we should be the strongest voice up there, but that tends not to happen," Ethington said.

The nondiscrimination bill is picked up by Sen. Ben McAdams, D-Salt Lake City, but the Mormon lawmaker's bill is not allowed to get out of the Senate Rules Committee, stifling discussion before it can be heard in a regular committee. 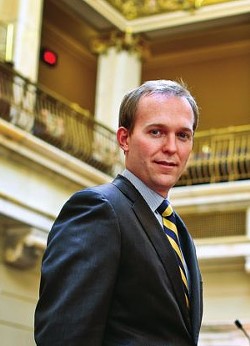 In 2012, McAdams was able to get his bill out of Rules Committee and to a regular committee. He also brought the support of the Salt Lake Chamber of Commerce and pointed out at that time that 14 other cities in the state had nondiscrimination ordinances that did not have an unfair impact on business.

As a Mormon, McAdams argued that the bill was not in conflict with the teachings or spirit of his faith.

“I don’t believe we have to choose between protecting against discrimination and the religious values many of us have in our state," McAdams said.  "I believe that faith and respect can coexist, and this bill would accomplish that.”

Once again, the bill was squashed and never made it out of committee.

March 2013: A Republican Sponsor Finally Breaks the Bill Out of Committee

Sen. Stephen Urquhart, R-St. George, helps power the bill out of a Senate committee, winning the favorable recommendation by a single vote. In 2013, the bill was bolstered by a University of Utah study citing 43 percent of gay Utahns and 67 percent of transgender Utahns reporting having experienced discrimination.

But it was nevertheless a divisive debate.

Sen. Stuart Reid, R-Ogden, argued that homosexual activity in his personal opinion was immoral and shouldn’t be supported by public policy.

“We do discriminate all the time as a society if we believe something is immoral,” Reid said. “As long as I feel that way, I cannot advance policy that frankly encourages the societal acceptance of [homosexual activities].”

“We’re not responsible for the moral beliefs of everybody,” Dabakis said. “We’re just trying to set the rules so everybody can have life, liberty and happiness.”

While the bill made it out of committee, it was once again denied full debate in the Senate, as Sen. President Wayne Niederhauser, R-Sandy, decided against hearing it by arguing that debate was pointless if the bill didn't have enough votes to possibly pass.

In the lead-up to the 2014 Legislature, Urquhart's bill was dealt an unexpected wild card when in December 2013, a federal judge overturned Utah law banning same-sex marriage.

In the wake of that decision, opposition to the nondiscrimination bill was fierce, and a coalition took to airwaves to attack the bill. A television ad sponsored by the Sutherland Institute claimed Urquhart's bill would affect Brigham Young University campus housing, even though the bill had an exemption for religious institution's like BYU and has had that language every year since the bill's first introduction in 2008.

“Opponents put this misinformation out there realizing the majority of people want to pass this law ... unless they can do something to change the dialogue,” Urquhart said at a press conference. The January press conference was held at the beginning of the session so Urquhart could encourage citizens to ask Senate leadership to hear the bill. Because of the recent overturning of Utah's law, leadership explained that they would likely hold off on hearing the bill and any religious-liberties bills while the Supreme Court considered the issue of same-sex marriages.

Urquhart called on citizens to write "Hear SB100" on blue notes that were then taped to the Senate Chamber doors.

While the chamber doors were plastered with notes, the Legislature refused to hear the bill.

February 2014: The "Capitol 13" Arrested for "Disrupting the Legislative Process"

Thirteen activists are arrested for staging a "sit in" at the Legislature in protest of leadership's decision to hold off on considering nondiscrimination protections once again.

It wouldn't be until six months after this act of "civil disobedience" that activists would be charged on misdemeanor accounts of "disrupting the legislative process." Troy Williams, one of those arrested, would argue that lawmakers were, in essence, guilty of disrupting a fair process for not considering the bill. 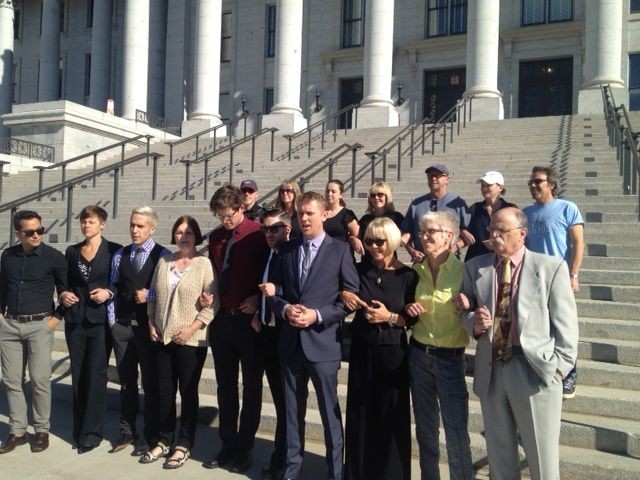 “We have no desire to shut down the Utah Legislature. We want to work with our legislators to ensure we have equal protection under the law," Williams said at an August press conference challenging the charges. "That is our goal, and that is our objective. We want to make sure every Utahn has a shot at the American dream.”

In a rare move, leadership of the LDS Church release a statement encouraging legislation that would balance the interests of people of faith in being able to express their religious convictions and at the same time allow for protections for LGBT Utahns against workplace and housing discrimination.

“We believe laws ought to be framed to achieve a balance in protecting the freedoms of all people while respecting those with differing values,” said Dallin Oaks, a member of the church’s governing body, the Twelve Apostles. “We reject persecution and retaliation of any kind, including persecution based on race, ethnicity, religious belief, economic circumstances or differences in gender of sexual orientation.”

After being worked on throughout the session Senate Bill 296 passes its first regular committee by striking a balance between free expression of religious belief and protecting LGBT Utahns against discrimination.

The new bill, sponsored by Urquhart and Sen. Stuart Adams, R-Layton, offers the same protections for LGBT Utahns as previous versions of the bill, but also allows protections for people with religious convictions from being retaliated against in the workplace for donating to political causes outside of the workplace or for expressing reasonable beliefs in the workplace—religious or political—as long they don't contradict the company's "essential" business function.

Urquhart cited the example of a Salt Lake City police officer who says he was fired for not riding his motorcycle in a recent gay-pride parade as an example of someone who would have been protected by the bill. Assuming, as the officer says, he arranged to have another officer cover that duty, and as long as he was reasonable in how he made the request, the bill would have protected him from being fired for expressing his religious beliefs in asking for a different parade assignment.

March 11, 2015: After an Emotional Floor Debate, the LGBT Nondiscrimination/Religious Liberties Bill Passes Out of Both Houses

The bill faced few voices of opposition but nevertheless, supporters in the House made emotional pleas to their colleagues to trust and have faith in the hard work that had gone into the bill. Rep. Brad Dee, R-Ogden, the House sponsor of the bill, told his colleagues that the bill represented a long journey for him in coming to support it.

He acknowledged meeting in 2014 with members of the LGBT community for the first time to hear out their concerns.

"I came away from that meeting understanding that I don't approve of their lifestyle, but I love them as individuals. Please understand I'm not asking you tonight to condone a lifestyle that you don't believe in," Dee said. "I'm asking you to guarantee their rights, the same rights you and I have today."

Click here to see the House floor debate, discussion of SB 296 begins at the 13-minute mark. 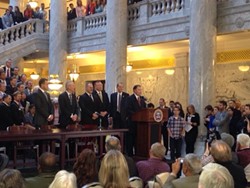 After seven long years, LGBT nondiscrimination protections are signed into law. Governor Herbert hailed the bill as a model for the nation in protecting LGBT people and safeguarding religious liberties. It was legislation he said proved the naysayers wrong about Utah's ability to bridge the polarized divide between LGBT communities and people of faith.

Lawmakers crowded the marble steps of the Capitol's rotunda at the ceremonial bill-signing, rubbing elbows with vested stakeholders from either side of the seesaw of religious and LGBT rights so delicately balanced by the legislation. Williams, one of the activists arrested for protesting aloof legislators, shared the steps with some of those same lawmakers, along with other key players such as LDS Apostle Elder L. Tom Perry. The Capitol reverberated with full-throated cheers from the crowd, especially in response to the short and jubilant remarks from Urquhart, the bill's sponsor since 2013.

"Here, we make history," Urquhart said. "We are showing that LGBT rights and religious liberties are not opposite. They are not mutually incompatible—they are pillars in the pantheon of freedom, and I have nothing more to say because it's time to sign this bill!"